I recently checked out a small coffeehouse in Second Life, a little corner of the grid in which people can go to chat, and every Saturday two people are invited by the owner for an interview in front of an audience. This place is Netera’s Coffee Lounge. 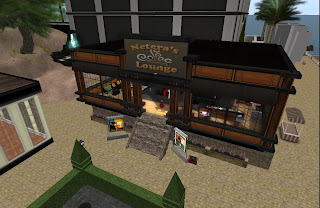 Netera Landar is the owner of the Coffee Lounge, “I’ve met so many talented people, its unbelievable. We’ve been doing this for months.” A writer, she had gotten in Second Life at a writers’ guild. She tries to get other writers as guests for her show, but does not always find them receptive, “we get a couple poets sometimes.” She then got the idea of allowing musicians to talk to their fans, about nine out of ten saying yes, “Two a week, back to back, they can share the audience.”

On the Saturday I dropped by, the guests were two David Csiszer and KatRose Serendipity. David sings live on the Grid, guitar and vocals. His entry into virtual worlds was through reading about them off a cereal box. He first checked out a place aimed at children, but looked for others, eventually finding Second Life. He appears at Nantucket, and gave a song for the audience, “I wish I was Superman, I wish I was Peter Pan ...” With someone showing up in a Batman avatar, the song seemed appropriate.

KatRose Serendipity described herself as a “veteran of the music scene” known for “sultry themes.” She had been touring for past ten years, but recently slowing down, appearing mostly in Second Life. She heard about SL through Yahoo chat, where her friends there encouraged her to get on. She was hesitant at first, eventually did, but found it so laggy she put it aside, telling her friends she needed a better computer. A few months later, she returned, a friend helping her set up in the Grid and soon did a performance. The friend also helped her with her appearance, before the help, “I looked like an 8 foot elf.” 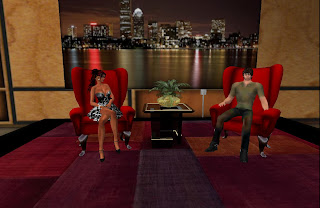 The audience close to a dozen to a dozen and a half present. Netera explained “this was a medium-sized audience ... its been much bigger.” She told me she had up to 50 residents with some popular singers. Of the coffeehouse, she explained she put some effort into the the interior decorating “to bring life into the place.” Among the touches were some virtual snacks, such as coffee and donuts to help lighten the mood. The coffee vendor, snacks, and other drinks are to the right of the door going in. To the left is a small reading area, with a few books on the table. in the center is the seating area for the event audience, and in the back of the place is where Netera holds her interviews.

Netera told me long before Second Life, she had been a community leader on AOL for several years, holding a chat for writers. She had also written for a local paper in one of Chicago’s papers for about 20 years, currently the society editor. She had been scared of going on Second Life at first, going to message boards then IMVU looking for friends, her real-life friends always being busy.

Eventually a couple told her about Second Life. She downloaded the program one day, and learned things such as “how to stay dressed.” She had to figure things out on her own, eventually ending up at places like Book World and MilkWood. She spent more time at Book Island, talking to people, listening to Mystery and Native American Writers. It was here she came up with the idea for the coffeehouse. 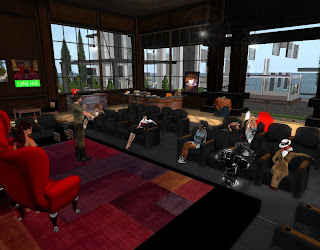 Following the interviews and the majority of the audience leaving, Netera and I chatted a little about various places in Second Life, Philip Linden’s speech, and other subjects. We talked about the roleplay areas in Second Life, such as Versailles, the roleplayers, “they create their own worlds .... fantasy, historical, ... Western, Gor.” Someone in the audience who stuck around to chat was Janeel Kharg, whom was with Ankh-Morpork, a place in Second Life inspired by Terry Pratchett’s Discworld novels.

Netera's Coffee Lounge offers both interesting guests, and after the interviews are over some interesting people in the audience one can chat with. It is located in the Terric sim at (40, 140, 29).