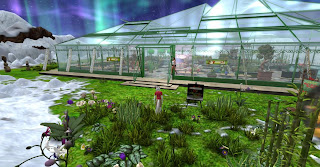 My friend, Kulta Hannu, knows I love freebies and flowers. So when she sent me a note about Arctic Greenhouse, a new site where you can win free flowers by playing puzzle and memory games, I couldn’t resist.

You will rez onto a game platform that is surrounded by sofas, a table of coffee and cupcakes, and the games. The game level is underground, below the arctic ice. Surrounding the platform are plants, steam vents and volcanic activity. 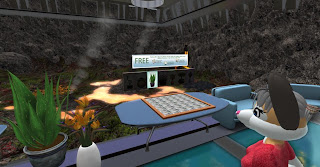 The memory game has 5 levels, each one progressively harder and more complex. The goal is to match the flowers hidden under squares. After an easy first level, bombs appear. Touch the same bomb 3 times and you lose. Just when you think you have the hang of it, tornado squares begin to appear. Touch one of them and the board gets scrambled. It‘s a fun and addictive game!

There are five tables of this game so there shouldn’t be a wait to play. The prizes change daily, too, so you can return and play again. The night I played, I won a beautiful potted aloe.

The two puzzle games are harder. Picture pieces of the plant prize are scrambled in a frame. The goal is to move the pieces around to form the correct picture. The first night, they defeated me. But I returned in the morning with a fresh cup of coffee and triumphed over the first puzzle. I’ll tackle the second puzzle another day. 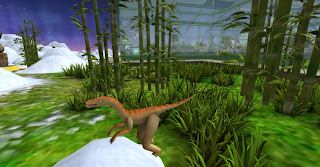 At the end of the platform is a transport bubble that takes you to the main greenhouse above ground. Or you can go there directly at Alternate Reality (143, 139, 54). The greenhouse is filled with beautiful plants at very reasonable prices. There are Valentine Day specials, too.

The Arctic Greenhouse is the latest creation of Logan Bauer, a SL resident since 2004. At the Greenhouse he has created plants that are low-prim but don’t look low-prim. He has used sculpts and other magic to make them detailed and beautiful. Walk around outside the greenhouse, too. There are a few trees and plants for sale outside. But watch out for the baby dinosaur!