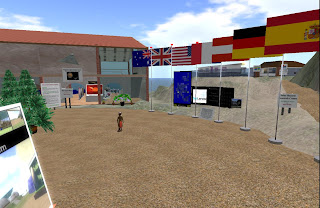 Checking out Daniel Voyager’s Blog, I read about a science sim that I hadn’t heard from in a while: Space Destiny Island. One of the “Sci-Lands” sims, it is a great sim with places that both inform and entertain. Unfortunately, it is about to vanish from Second Life.

Porting in at the LM given for Space Destiny (85, 94, 24), a short distance to the south is the Liyana Hall, which offers a sign and notecard explaining about the sim, and has a small picture gallery with a few exhibits. Also hear the entrance is a display explaining about the Sci-Lands in general, along with flags of the countries of people whom sent donations to help pay for the sim. Down a trail to the west is the Solar Hazard Research Center, which explains sun-related dangers such as solar flares. Over looking it on a hill is a planetarium. 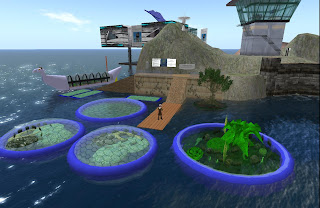 Going east of the entry point across a bridge, one will find Sustainable Communities, which explains a little about how certain skills familiar to 19th century pioneers and the Amish will prove useful again to planetary colonists, notably the need to be self-reliant with just the resources at hand. The Midrivers Project Space Center discussed health and well-being in space, mentioning of the “vibrating dumbbell” on TV commercials, saying its origins were in the space program. It also mentioned Tuna Oddfellow’s Odd Ball, saying the psychological effects the show has on some people could prove useful for researchers looking for drug-free ways to relive stress and homesickness on astronauts. North of that on the coast were displays of aquaculture (farming in the ocean), and “Sea-steading” - structures for living and research built over the ocean like oil rigs. 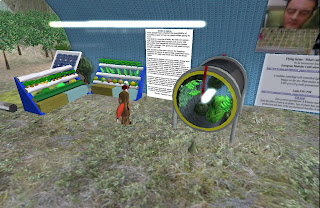 The northeast part of the sim is Skylon, it’s huge rocket plane visible on the map. Here one will find exhibits on aircraft and ariel science, as well as a flying carpet to take you around. Down the east coast are exhibits on space stations and rockets. In the southeast corner of the sim is the Study Centre for Food Production in Controlled Environments. There, one will find exhibits on agriculture in space, notably a centrifugal force chamber to simulate gravity in a space station (plants don’t get dizzy). There was also a link to a Youtube of the University of Arizona’s CEAC Lunar Greenhouse (http://www.youtube.com/watch?v=F4Dbh0nvh-4).

Just down a path west from the Food Production Center is a recreational area with lounge chairs and dance floor. Looking around, I found a notecard with a LM to a Trek roleplay area over the sim (157, 207, 2048). Going there, I found a Trek space station: Outpost 17. Looking around, I found a dispenser that could manufacture phasers, datapads, and Starfleet uniforms: gold, blue, and of course red. While there, I ran into two members of the RP, Flea Habilis and Yoiko Hax. “We've about two days left,” Yoiko explained, “Still not sure exactly what's gonna happen to our station here. ... At least everything's backed up. Even a lower prim version -just- in case. ... I feel worse for everyone on ground level. As many times as Space Destiny seemed to change direction, they all preserved.” Their RP was also known as Space Station Hideki.

Exactly why the sim is closing was not explained, though they did say everything was being set up on Opensim, with people invited to contact Silviana Jenvieve (Dr. Jenny Oliver in RL). So those able to go to Opensim will still be able to see it. For those who can’t, Monday February 28 is the last chance to see this educational sim.