The man behind Aeneas Anthony's avatar is a real life history teacher, one whose vision was to recreate the Minoan culture in 1500 B.C. The civilization had always fascinated him and since there wasn't a Minoan sim, he decided to create one.

Anthony reminds us that the Minoans were contemporaries of the ancient Egyptians. They appeared to be more peaceful than most ancient societies. 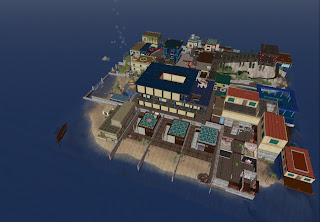 Here on Second Life, The Minoan Empire introduced participants to some of the
mythological elements that fit the ancient Greeks’ stories.

"About 95% of the structures were my design, based on photographs from archaeological excavations on Crete and Santorini (Thera)," explained Anthony. "In the past year, I was able to upgrade some of the textures and columns from wonderful creations by Alekso Minotaur and Airedale Magic. We use to have four regions joined together, which allowed for sailing. We also had a reconstruction of the Thera volcano for the first two years of the empire."

Anthony had a historical theme-based residential community. He states that there was a true roleplay environment there, other than in-character temple ceremonies led by priestesses.

Asked what fond memories he would carry with him during his future Second Life
experiences, Anthony replied that he enjoyed the building process during the first few months.

"Along the way, I also upgraded parts of the sim to make them more historical as I was able to do so," he said. "I also value many personal friendships that were developed here, and allowing so many good and interesting people to have a stage on which to interact in a peaceful and interesting environment."

As for his own involvement, Anthony created several different avatars and roles. He was the Royal Architect, and was responsible for the business aspect of the sim. As Minos Eracktor, King of Crete, he presided over the chariot races and supervised the court dancers in the Palace of Minos. On rare occasions, he portrayed some of the gods and the Minotaur in the Labyrinth.

In addition to all that he built, Anthony created a Museum of the Minoan Civilization.
This virtual introduction to an ancient culture was for many a first perspective. It kindled a social network of close friends, as well.

Having teleportated to the skybuild entryway to Ancient Crete, I was led to the heart of the city: the palace. I found my visit to be dedicated to the time period in greeting and attitude. My guide was Stroldor Demonia, the Governor of Crete, and her guard, Westley.They were in character and knowledgeable the majority of the tour. The tour was no less than 1 ½ hours. Demonia detailed the various highlights and Westley added his helpful comments.

A weekly chariot race on Sunday afternoons was the main activity and brought in non-members. A friendly beach party followed. There were 15 residences and a marketplace that featured time-appropriate furniture, clothing and structures.

According to Demonia, the majority of the meetings were held in the palace. There was the great hall or feast room, for large gatherings. The throne room was next door and the palace dance hall, upstairs. In the throne room, the King received foreign dignitaries and treasures from other nations the King had allied with. 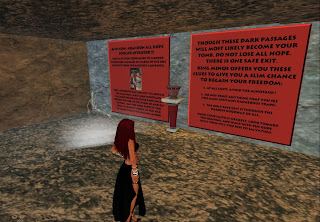 "There is definitely a lot of history within these walls," said Demonia, and then she led me out of the palace. "Down there is the labyrinth where the Minotaur resides. It is a maze filled with perils at every turn. Only the bravest find their way out," she said before she leads me to the dance hall. “Group members had many formal events in the dance hall. Above it was the King's private residence.”

Shortly after, we stand on a terrace that overlooks the city. I view the many special areas where members shared their hours.

There are two highlights that focus on the spiritual aspects of the Minoan culture.
Ceremonies rotated around the temples. One is the Bull Temple that stands above the city. Here ceremonies were held every night.

"This is the mighty bull, the incarnation of Zeus, father to our beloved King Minos," she explains. "This is how he manifested himself to Europa mother of King Minos. He is known as the god of virility, with grace and stamina.

Westley continues by telling me that Zeus abducted the Phoenician princess, Europa, disguised as a bull, and then carried her on his back to the island of Crete where she bore him three sons: Minos, Rhadamanthys and Sarpedon. As per the records, not his words, he notes.

The other ceremonial site is the Temple of Poseidon. Demonia stated that they had
ceremonies daily at noon and 5 p.m. sl on weekends.

"This is Poseidon, the ruler of the waves and earth shaker," explained Demonia. "He protects our ships as they are our only way of trade.”

"Voyages were dangerous," I added.

"Yes, they were, and the only way to trade our goods and bring in much needed food that we could not supply ourselves," she replied.

We then wandered down to an area that honored Europa, the Moon goddess, queen of tides, giver of dew and moisture; she also was mortal, which made King Minos a demigod.

Onward we move to Earth Mother, the breath of life for everything.

"Hence the statue is bare breasted," said my guide. "The ladies of Crete honor her by revealing their breasts. There are many ancient pictures that depict this. The most famous are the three ladies.”

Next came the Council of Resident's Hall, where discussions were held about what they would like to happen within the community.

In the Hall of Nations many peace treaties were signed. Demonia mentioned that the real civilization was the only nation that treated women equal to men. 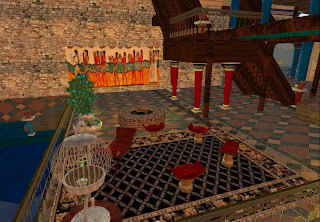 "Women were not just regarded as homemakers. They were actively encouraged to
participate within the political system," she told me.

The last stop on the tour is the chariot viewing stand. The track was around the island rather than a circle. She also noted how the beach was a great place for everyone to chat and catch up.

This special historical build was in existence for over 3 years. Anthony’s attention to
detail was amazing and it was his passion, according to Demonia and many visitors would agree. Though the sim is now closed, an "exile community" will continue with the chariot races and dances on the beach of a different adult sim.

Editor's Note: Netera sent over a notecard separate from the article announcing their new location. It's included as the Minoan's epilouge.

The tsunami devastated our land... a few of us survived and have made an exile community, we had some items wash up on shore with us...

We are going to continue with the Chariot Races and celebrate that Earth Mother spared us by dancing afterwards at the beach in traditional style....

Hope all survivors make their way here, we look forward to seeing you all...
Posted by Bixyl Shuftan at 12:54 AM