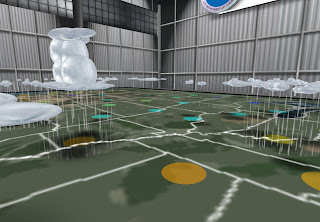 I first reported on NOAA Island in March 2008 for Second Life Newspaper, set up by the The National Oceanic Atmospheric Administration, the government agency in charge of research of the oceans and weather. The Meteroa sim, about a year old at the time, was interesting then, and three years later still has much to offer those wanting to know a little more about meteorology and oceanography.

To get there, just type "Meteora" on your map and teleport over. The sim will automatically place you in the entry point. Just north of the entrance is the Real-Time Weather map. A map of the United States (save Alaska and Hawaii) shows the temperature and cloud cover & rain over the country. The map is not static, but updated as conditions change about every eight minutes, the data recieved by NOAA. 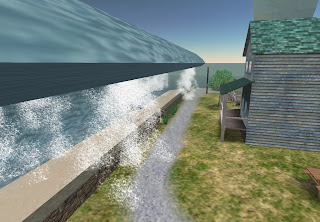 South of the Weather Map is Science on a Sphere, which contains a hologrpahic display sphere viewed from inside. To the east is the Tsunami simulator. Activating it, a siren goes off, and under the surface the ocean floor shakes. This is followed by the water drawing away from the beach, then a massive wave crashing down and wrecking the nearby buildings. This is probably one of the more entertaining places on the island, and I've seen at least one youtube poking fun at it.

To the south is the Sea Life area, where one can take a sub to observe plant and animal life, a hydrothermic vent, and a cave. To see inside the cave though, you need to either exit the sub or pan around in. The southwest corner of the island has the glacier simulator. Activating it, the hillside (and anyone standing on it) get encased in ice, and the water level nearby drops.

The northwest part of the map has the Hurricane Plane Ride and the Weather Balloons. By grabbing a balloon, or getting on the Orion hurricane hunter plane and taking off, one can fly up to see the hurricane high up in the air near the island (or you could just fly up their on your own).

Both the submarine and hurricane plane can be quirky. The first time I used the plane, somehow it got it’s tail caught in the hangar and would not move further. When I tried it more recently, it took off normally, then in mid-flight near the hurricane, it vanished, leaving yours truly to free-fall into the water below. The sub was stuck in the docks when I got there, so couldn’t use those either. 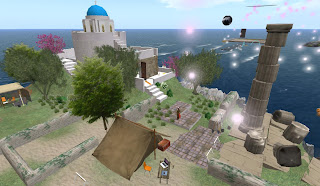 What has changed since March 2008 is the sim now has some neighbors. North of Weather Island, one can take a look at an Alaskan port and go on a virtual crab fishing trip. To the west is Okeanos, or NOAA Second Island. There, one can go on a survey vessel, clean on oil spill, study algae blooms, and look at coral. There was also an archeology dig. Curiously, there were some purple "streamers" nearby, but I didn't find out what they were for. South of Okeanos is the Second Earth sim, which offers a gigantic globe.

To the east of Meteora is Energy Island, which had what looked like a supercollider wraped around the place. Strangely, the Island was blocked from entry. There was, however, a smaller floating island overhead with a few exhibits. Why the main island would be blocked to most if the purpose of the place is education is unclear (though probably one can work in a joke about government agencies).

Despite those small flaws, the NOAA region can only be considered first class, even after a few years. It is a must-see for any Second Life resident even remotely interested in science.