We all know that being in Second Life is like pouring "Miracle-Gro" ® on your emotions. Things can get intense very quickly. Where do you go when you need to be alone, or to talk it out with someone?

I am going to share two less known places with you. Everyone knows the top romance spots, such as those listed in the Destination Guide (http://secondlife.com/destinations/). There are 59 listings in the Romantic Places section, and if you go to most of them, you will not be alone. If you want an environment that supports dialogue or solitude, come with me. My bias for original mainland will be apparent in this article, but I write so that I can share my bias. 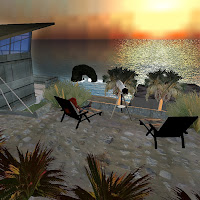 One of my oldest friends in Second Life introduced me to Solitude Bluff in 2007. This is not a place with the bells and whistles most of us expect in a virtual world. Instead, you will find two deck chairs, a deck, views of the water in front and in back (it is a bluff), and remarkably not a sculpt or mesh in sight. A few Library plants dot the horizon. This is not a very promising set-up until you need to use it. If you have to have a heart-to-heart, or you want to sit with a friend and console him or her, this is the place to go. Take a deck chair, have your companion take the other, and let the conversation begin. Slowly, subtly, as the sun rises or sets, and you begin to notice the sound of the waves crashing on the shore and the birds chirping, your heartbeat will slow. You will be free to concentrate on typing or talking, and your problems will start to be sorted out.

Solitude Bluff is the work of Lazarus Marat, a resident who joined SL on October 8th, 2005. I have never seen him around in world, nor have I ever gone to Solitude Bluff and found that there were others about. It is where I go when I need to think, to talk to a friend, or just to let the sound of the waves calm me down. Check it out when you need a place where the words you are saying are more important than anything else. 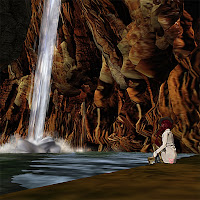 The Second Life color sims came online in 2003, on the original continent of Sansara. Over the past nine years, they have experienced a lot of change. The sim of Teal was originally the site of a large amphitheater where Philip Linden would hold crash-inducing Town Hall meetings that were starting to be phased out when I was rezzed. A resident who has been around since 2004 now administers most of Teal: Jopsy Pendragon. Jopsy oversees the famous Particle Laboratory, and breathtaking Cloud Chateau—a stunning demonstration of what the particle system can do.

In my opinion, the best part about Jopsy is his continued enthusiasm for Second Life demonstrated by his response to my query about the caves on Teal: “…I keep thinking of all the things I still want to do with them.”


I use the caves when I have deep thinking to do. Generally, I go to a portion of the huge caverns from which I can see the waterfall, and sit along the edge of the underground stream. The caves are quite extensive, with lots of glowing crystal-like surprises, and hidden nooks. Of course, exploring with a companion is a great idea as well, but I love the dark and comforting feeling of the caves, the knowledge that I am sitting in the earliest parts of Second Life, and the safety that comes with my belief that they will be around for the years to come. 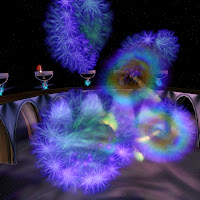 I realize that there are at least hundreds of thousands of hidden-away spots in Second Life, but I have shared with you two that I know and use. The SL Newser is always interested in your input. If you know of a hidden place (especially on the Mainland) that deserves a mention, please contact me: DrFran Babcock.

Happy exploring, and may you find peace of mind. Visit the Cloud Chateau: A demonstration of the things that particles can do: (http://maps.secondlife.com/secondlife/Hina/25/37/748) .