Last week I time-traveled to historic Japan at Japan Chubu (57, 253, 23).   It is a perfect place to learn about Japanese history and have fun, too.    The sim is set in the Edo era, approximately 1600 to 1800 A.D., when shoguns and samurai flourished.     Japan Chubu is a role play sim, but residents who aren’t into RP can visit to simply relax in a beautiful, tranquil setting.   The area includes a Japanese castle, temple, village, and other structures, many of which are replicas of real-life Japanese architecture.


Upon arrival I found a box of free items, including traditional clothes for both men and women.   In order to keep the authentic feel of the sim, everyone is asked to dress in traditional outfits.  I quickly changed clothes and returned. 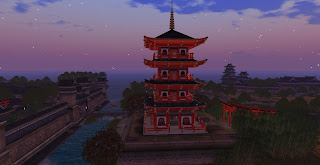 At the landing point is the Edo Bridge.  Festive Japanese lanterns float in the river and made me feel calm and serene.   I decided to walk into the village and explore it first.  As in real-life, geisha houses (Okiya), rickshaws, and samurai can be found here.   There are sampans available, too, so that the sim can be explored by water.
In the village there are lots of walkways and alleys to explore.   Many of the shops were empty, but the sim is actively recruiting merchants who can offer items that will fit in with the time and history of this era.
I walked into what I thought was a traditional tea house and had a cup of Tao red tea.   Later I found that I had wandered into the in Shiraito-no-Taki Hanamachi Geisha district.   The group is named for a real life waterfall, White Treads Waterfalls, located near Mount Fuji in one of Japan’s national parks.
There are two Geisha houses which both perform and teach classes relating to Japan.  The Otonashi Okiya is set in the Edo period, while the Otodome Okiya is located on a different sim and set in modern time.     Some of the classes offered are Japanese history, Kitsuke (kimonos), Hogaku (Japanese music), Shodō (calligraphy), Ikebana (flower arrangement), and many others.   One can also learn to be a Geisha, and information is available at the sim.
As with many Japanese sites, much of the attention is focused on the Samurai.  At one point I received a notecard asking if I was interested in joining the Keibatsu Samurai Clan.   According to their notecard, the Keibatsu Samurai practice Bushidō, "Way of the Warrior".    Although Samurai are interesting, they are only part of the culture of the era.   During my visits I met two women who are representative different classes that existed within Edo Japan. 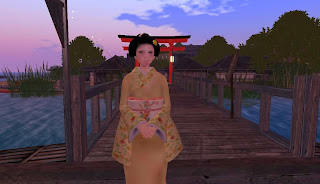 I met 真由美 (mayumi.juriya), who is a maid in a Samurai’s house.    Mayumi was very polite and bowed humbly when we met.    I was very interested in her life, and she graciously answered my questions.  She described the Samurai that she works for as “a kind, honorable man” who has “high standards”.   She said the work was hard, but she has a place to live and is grateful for that.  I asked her whether she planned to stay as a maid or move into a different position.   真由美 (mayumi.juriya) said, “Well, I'm not sure at the moment. Of course, I'd like to be independent someday.   Maybe work in a shop or a tea house.  Have my own machiya.”     A machiya, I learned, is a traditional townhouse.  Unfortunately  we were interrupted by another visitor before I could ask her any more questions.
The other woman I met was Misaki  (princesschaos.xenno).  Misaki is the head Oiran at Yukaku Utsukushi Hana.    Unlike the shy maid, Misaki was very outgoing.  She wears beautiful gowns, her hair and make-up look perfect, and she lives and works in a beautiful home, located at Yukaku Utsukushi Hana, Aosagi (96, 77, 22).    We met in one of the shops.  Although she doesn’t live at Chubu Japan, she visits it often. 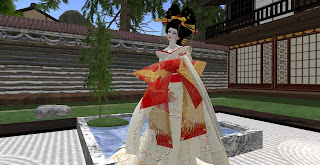 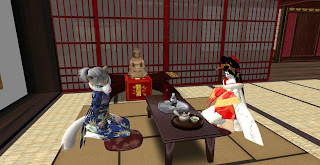