Chances are you may have seen one of the Fast and Furious movies starring Vin Diesel with those sports cars going hundreds of miles per hour in those breath taking races and car chase scenes. Well in Second Life you may not be able to physically touch one of those epic sports cars. However you can come close by checking out Racers Island and drive around one of their 15 raceways. When I bought my retro car from the Bay City car show, I found Racers Island through a Second Life search under raceways.  One of the first things they struck me when I teleported to the sim for the first time was the radio stream was a drum and bass station always playing drum and bass. It certainly pumps your blood to get your mind and body in a racing mood. The website bassdrive.com plays a variety of all genres of drum and bass from jazz to scary. 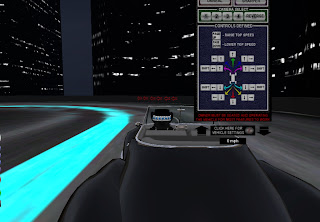 15 raceways? That’s a lot! Eddie Mathieson the creator and owner of Racers Island might agree with you. But his passion for cars and racing inspired him to over time buy and rent a sim totally dedicated to racing. Not just for stock cars, but motorcycles and even a human race too! The 15 raceways are skyline, Sunset short and long, Stock car Oval, Nitro, Streamline, Oasis, Garage, Timberline, a demolition Derby area. The other tracks are Yuni wacky world which looks a lot like a Mario kart raceway. Yuni Battle Royal, Sunrise, and my favorite track the Tokyo Drift. Each of the racing tracks are built very well and crafted after real life racing tracks. 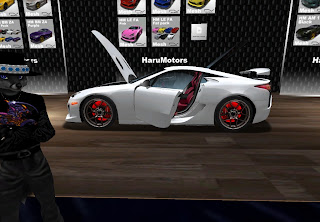 Eddie who has experience in real life with 3d graphics on computers came to Second Life and created Racers Island in the spring of 2007 a little before my newbie self was born in SL. His Racers Island has been around a long time. Over time he has developed new cars and new raceways. As part of the raceways, he has professional stock car races on his sim. Anyone can enter so long as they have the right stock car costing 1,500L. There’s also a demolition derby if you want to destroy instead of drive around. The scripted junk car is all of a mere 100L. The demolition derby is held 6pm SL every Saturday and hosted by Racers Island’s manager Nella Boccara.  There’s a pot where everyone who wants to participate chips in 20L. Then as she announces over voice chat 3…2…1! Smash 'em Bash 'em! Do as she exclaims and destroy the other cars by driving and ramming the other cars. 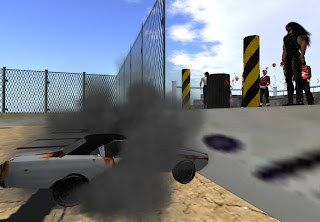 Thinking like a fox I thought it would be best to avoid damage if possible and let the other cars kill each other. This backfired against me however. When I don’t take damage or hit another car in a set period of time, my car will overheat and then I take double damage when I get hit. I then realized it’s better to seek and destroy and quickly as possible instead. Racers Island added that script to the demolition derby cars after realizing someone was always winning by avoiding damage.  I played 10 or more times and won twice winning the pot. Being competitive I grumbled when I lost but I still had good natured fun playing over and over again. It was fun to see my fox avatar jump out from a wrecked car. At and towards the end of each demo derby car parts were strewn all over the area. They slowed down your car getting in your way adding realism to the mayhem.
When I talked to Eddie himself he said that Nella was his favorite manager. Using the TV show “Star Trek the Next Generation” I said Nella was Commander Riker and Eddie was Captain Picard. In fact Nella was voted “Best Race Manager of the Year: Nella Boccarra” as posted on the Racers Island website. Eddie laughed and agreed that I said a good analogy to the management relationship between himself and Nella. 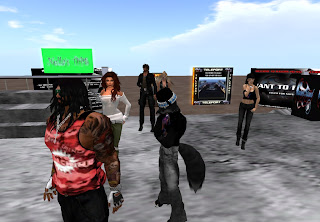 I asked what stood out about the stock created for their races. David Wetherby named Rookie of the year suggested I try out one of the demo stock cars. I found one on the sunset track. The Maximum speed was higher and the demo stock car was much easier to control. Instead of crashing into the walls I was making smooth turns. The car I purchased is an excellent car make no mistake. But the stock car demo I tried out is much better suited for a professional race.
One of the things Eddie mentioned was that his racing sim was welcoming to lady drivers. He didn’t point a finger at any racing sim in particular, but he mentioned other racing Sims didn’t give lady drivers a warm welcome. In fact he mentioned a lot of the people who hang out at Racers Island were women.
On Monday evening I was invited to come practice with David Wetherby and Wildrose Bijuox. David was very skilled indeed as Eddie said next year he might be champ. Using the demo car David was way ahead of me and same with Wildrose as they were veteran drivers. I got a good feel of what a race would be like. It seemed like a real life race like you would see on TV or live at a race track.
It’s always fun to experience something new in Second Life land. The Racers Island raceway that I stumbled on a couple months ago was certainly a fun place. It’s filled with lively people and great tracks just let loose and drive around. One thing about this sim is that it costs zero gas. Anytime I bump into a wall by accident I don’t risk a life threatening injury. Just using the demo car or any vehicle you may have bought from their mall or elsewhere I highly recommend cruising around on one their raceways.
If you want a new place to explore and experience check out Racers Island Raceways. Who knows you could become the new champ or rookie of the year.
Racers Island Raceways is located at Racers Island (24, 41, 811). There's also a Racers Island Raceway blog at http://racers-island-raceway.blogspot.ca/
Grease Coakes
Posted by Bixyl Shuftan at 6:00 AM