Areo Pines Park and Recreation Area has been holding special events every month this fall. September had a somber event, a Stairclimb tribute to the New York firefighters of Sept. 11th. For October, it was Halloween, with a number of spooky happenings across the several sims. And this November, it's Thanksgiving's turn, with the Areo Pines Sixth Annual Thanksgiving Pow Wow. 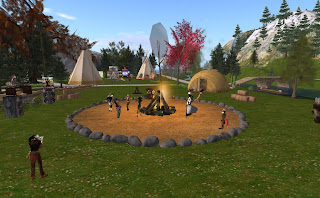 "All Nations and Tribes Welcome!" proclaimed a notecard passed around before the event, "Suggested Attire: Colonial, Pilgrim, Native American, North American Wildlife Avatar, etc. Turkeys and other fowl attend at their own risk! Warning:   This party has been too much fun in the past, so please celebrate and party responsibly!"

The Pow Wow began with a big party on Friday November 16th. Arriving on the scene, most everyone was dressed up either in Indian or Pilgrim outfits, and dancing around a large bonfire. People were having a good time, cracking "paleface" jokes, with the DJ in a chief's headdress. All around, a number of teepees and Indian lodges had been set up. There were also vendors nearby where one could get an Indian or Pilgrim outfit. And of course a table set up with a huge Thanksgiving feast for anyone seated. 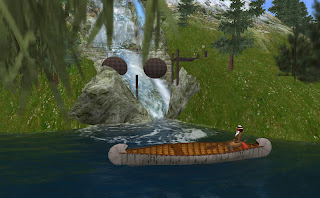 Besides the dancing around, there were birchbark canoes at the riverbank. One could board one and take it around the rivers of the park. The part itself has been given an autumn look, with trees leaves having yellowed and reddened, patches of grass and stretches of trails covered with the leaves, and of course the sign of the leaves fluttering down to the ground. The natural scenery was quite beautiful.

For covering the trails, one could do it on foot, or on horseback. Not too far away was a horse rezzer. By mounting it, one received a HUD and a horse. To ride, one detaches one's AO, then wears (or adds) the HUD and steed. After pressing the synchronize button, you're ready to trot. But if you already have your own mount, such as an Amaretto, that's fine too. 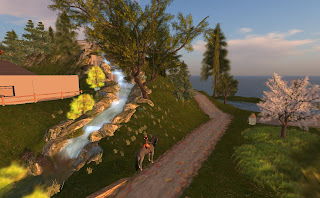 The Pow Wow itself is scheduled to go on until the 25th, with Areo Pine's Annual Turkey Shoot sometime during the event. Cindy Bolero, the park's director, told me that it would be a good idea for people to come by and enjoy the autumn colors while they can. After the Pow Wow, a cold front's scheduled to arrive, and bringing snow just in time for the Christmas season.