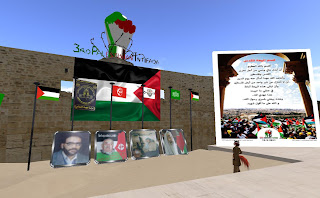 This month, events took a turn for the worst in the Middle East when rockets were launched from the Gaza Strip into Israel. Israel soon responded with air strikes, taking out military targets and a noted leader of the Hamas terrorist organization that effectively rules Gaza, while relying on the "Iron Dome" missile defense system to take out rockets headed to population centers. Eventually, a cease-fired was declared, with Hamas declaring victory despite Gaza taking most of the damage and casualties.

As it turns out, there's a sim in Second Life built to support the cause of militant Palestinians. Jordan River, named for the water that flows next to Israel, hosts a mosque, and a number of Palestinian flags and propaganda exhibits. Among the first things I saw after I ported in was over the wall was a prim fist in the air, black, white, green, and red, with wire around it and with the words "Third Palestinian Intifada." Much of the language was in Arabic script, but there was no shortage of English. 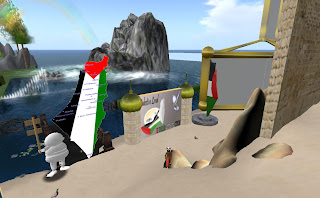 The exhibitions offered a near-constant berating of the Israelis, or the "Zionists" as they called them. There were pictures showing scenes of Palestinians protesting, and some exhibits accusing the Israelis of brutality, calling them gangsters and terrorists, and one openly comparing them to Nazis. One exhibit showed and Israeli solder captive in a cage (Gilad Shalit), next to another showing various Western personalities making anti-Israeli statements, including White House Press Corp reporter Helen Thomas who was once caught on film saying that the Israelis should "get the hell out of Palestine and go back to Germany, Poland,"Another showed several bodies shrouded in Palestinian flags. One exhibit appeared to be of the first Gaza comflict, in which case the Israelis quickly responded to rocket attacks by sending in ground troops. The goal listed by the place was shown on maps: the end of the Israeli state by 2025. 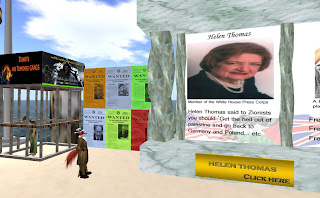 Jordan River is not a new sim. "New World Notes" and "In a Strange Land" wrote on the place in July 2010. In the later, writer Iggy O had a few words with one of the men behind the sim, Lord Ansar. Ansar defended his actions, "I like Mojaideen, I support them even with my look." He stated then "if Lindens ask me to remove a specific thing, I will do." Hamlet called it a sim with "most extreme forms of expression."

Next to Jordan River is another Arabic sim, but this one didn't seem to have any propaganda on it. What it did have was a few games, a dance floor, and a number of pet breedable fennecs.