By Grey Lupindo
Renaissance Island is a Tudor settlement where SL residents can learn about English life during the 16th century and have fun, too.  The wharf and dock area is a great place to begin, located at Ren Isla, Renaissance Island (204, 213, 26).  You can either start a walking tour here or take a carriage.    The Village is huge, however, and to see it all may take more than one visit. 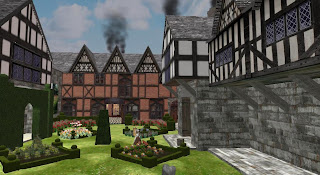 Renaissance Island was created in 2007 by historians who wanted to recreate life during the Tudor ear.  They took on roles of people who would have lived during that time and established a place where others could join in the fun as they learned.  The Alliance Library System, a private benefactor, and later the South Central Regional Library Council in New York provided funding and support.  However, the Village is now sustained by its residents, educators, librarians, and visitors.
SL Resident Diamond Coronet is the Project Director.  In her profile, she notes, “The Renaissance means Rebirth.  What better way to enjoy this era than re-birthed virtually.”  On her profile you can find information about educational and support opportunities in the village.
Although it isn’t required, a great way to visit this site is in proper attire.  If you don’t have Tudor clothing, you can pick up free outfits at Vandeberre’s Emporium & Armory, located at Renaissance Island (196, 126, 26).  The merchants in the village will also sell you some very nice clothing, too.  At various places you can buy armor, swords, and other necessities.
I started my exploration near the Globe Theater, at Renaissance Island (174, 25, 26).  In the Globe you can get a free audiobook of “Romeo and Juliet” from Librovox.  There are notecards with information about Shakespeare and many of his other works are on display. 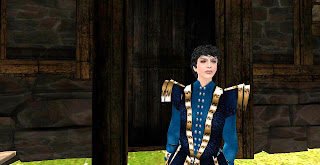 While I was exploring near here I ran into one of the villagers, Ashton Akiri.   He has been a resident since February, 2010, and is currently working on a project there.  He was very helpful in giving me links to their website, which has pictures, videos and other information about the site.   It can be found at https://sites.google.com/site/renaissanceislandsl  Akiri has a very large home in the Village, which he has open to the public.  There are other residents who also allow visitors to come inside. Some of the homes have handcrafted tables and other artisan wares for sale, too.   I saw a beautiful inlaid table for $50L and a hand-woven rug for $20L.
Outside the Globe Theater is one of the many teleporter maps that are a great way to orient you as well as move quickly throughout the site.  If you have the time, however, it’s fun to stroll down the streets and alleys. There are too many places to discuss individually:  a school, a small fort called the Reading Primley Bulwark, a stable, a community garden, and many others. There are many free items to be found at each location or some free activity you can do, as well as informational notecards.  I milked a cow at one spot and borrowed a free AKK horse at the stables. 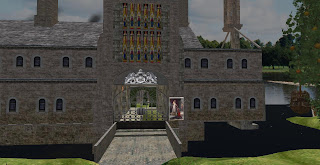 In the Tilt Garden, located at Renaissance Island (32, 69, 26), you can take fencing lessons or participate in jousts. According to a calendar of events, weekly joust tournaments are held on Sunday evenings at 7 p.m. SLT.  For a $1L donation you can purchase a pendant or a flag and cheer on your favorite.
My favorite building is Lagswell Manor, which is based on a composite of several RL castles and halls.   The Manor is a grand mixture of educational, cultural, and fun activities.
In December a Masquerade Ball was held, and titles were bestowed on people who supported King Henry and his village. The Ball and titles seem like a fun and festive way to raise support for the Island.  Wealthy supporters could become a Marquisate or an Earl, at least for a little while, by paying $10,000L or $5000L respectively.  The social climbing poorer gentleman could become a knight for $750L.  Each title came with a different amount of privileges, except for the poor knight who doesn’t seem to gain anything except the privilege to be called Sir for a little while.
I saw that a few titles of Baron were available for $2500L, including ones for Grey of Codnor, Greystock, Grey of Groby and Grey de Ruthyn.  I’ll have to check to see if I have any relatives on the Island.   In the meantime I’ll suggest to Diamond Coronet that Baroness Grey de Lupindo has an elegant, regal sound to it, and they may want to include it next year. 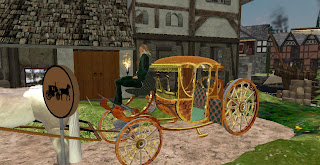 Inside Lagswell Manor is a Music Room and information about Thom Dowd, whose RL counterpart was a professor of music at the Conservatory of Fribourg in Switzerland.   He performs Renaissance and Baroque music on a recorder and has brought his talent into SL.
The library that is located here is fantastic.  There is a wealth of information about Tudor England and the literature of that era.  If you take the stairs up to the second floor, you will find a game room and the hall of Queens.  Portraits of the wives of Henry VIII are here, including an informational notecard about each one.
The Manor also includes a Tudor kitchen and information about the meals that would have been served during that time.  I picked up a free barrel of spiced Mead, which should be a hit at the next SL Newser party.
No village would be complete with a church, a doctor, and a tavern. Renaissance Village has St. Minutia’s Church, both a physician’s residence/office and a healer’s hut, and the Boar’s Head Inn.   It has many other builds and activities, too, for both serious students of the era as well as SL residents who want to travel to a different time and place.