Tales From the Ghost Forest – LEA14

I had seen the Linden Endowment for the Art’s Tales From the Ghost Forest mentioned on the log in screen several times. Usually, that means it’s a build about which I won’t write, because I figure that promoted sims get a lot of coverage. I decided to visit anyway, with a friend, and decided to tell you about it. 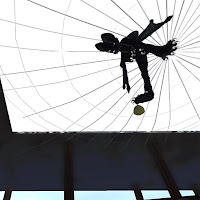 First, after a few visits, and some photography, I am not really sure I understand Uan Ceriaptrix’s build. However, the mood he creates, and the post-apocalyptic feel made me feel immersed in another dimension. I believe that’s what art is supposed to do.

The build is composed of four different parts. You are greeted by a giant spider when you teleport into the sim. Be careful or you may end up in her web. Instead, follow the colored balls over the long bridge, up a ladder, and enter Junk City, which is just what it sounds like. According to Ceriaptrix, this area, which is a barren path studded with garbage and pollution is the point at which things started to transform through a change and restructuring of technology. Humans have been transformed into avatars and holograms, and homo sapiens are extinct. 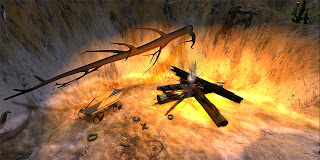 Leaving Junk City, you enter the Ghost Forest, which the artist labels as Mother Earth. This region is filled with science, technology, and devices that have been left to the trees and fishes, to provide them with energy. In place of the machines, odd vegetation sprouts along the canyon path. Twisted, odd vegetation, that is tended by alien creatures. Boggy greens submerge your feet in tiny plants as you walk along and tiny bubbles float up through the ooze, hinting at the possibility of new life. 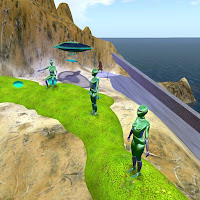 When you leave Mother Earth you will find yourself in Election (or die trying), which is the hope for the regeneration of the world. The luminous beings have kept collections of biology so that the ecosystem can be regenerated.  UFOs, chairs with teeth in their seats, aliens, and giant insects hold court, bringing the damaged land back to life.

At the end of the path the land ends, and the water beckons. Under the water in the unconscious that contains a carousel, a sand castle, a display of Uan Ceriaptrix’s, and other items.

I loved the build for it’s look and the builds that were on it. The terraforming created a land that was at once familiar and alien. Uan is a skilled creator, and his palette of sandy-colored ground, and green toxic or leavy touches. The windlight setting creates a smoggy sky that reminds one that this is a dying land, trying to regenerate.

I have always believed that despite what the artist or the art is trying to say, once the public views it, what is perceived becomes their truth. As I said, I don’t think I understood what was intended, but I liked it, and it made me feel strong emotions of loss.

You can come and visit The Tales From the Ghost Forest at LEA14: http://maps.secondlife.com/secondlife/LEA14/128/128/15 and decide for yourself.