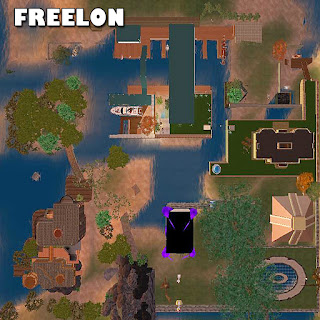 I keep continuing to explore the original Second Life™ sims, because I love history, and I love this virtual world. So often we forget to preserve the past, and then it’s lost before we realize what value it had. Freelon is the sixth sim to come on line in Second Life™. It is another sim that I have spent little time exploring until now.


Freelon is believed to be one of the first mature sims on the grid. In its early days it hosted The Black Sun, a 2003 night club based on the Snow Crash book venue. Those who remember will recognize that this book is believed to be what inspired Philip Rosedale to create SL. Sadly; it is no longer on the grid. Another lost parcel is the Amazon Nations, the land of which seems to have been bought by Erwin Solo, who leveled the Freelon volcano in the process of creating his builds. 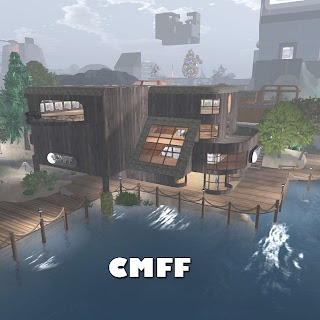 The largest landholders on Freelon are Erwin Solo and Del Lykin, both relatively new to the sim.  However, there is someone on Freelon who was there from the very beginning, and this is Chip Midnight, owner of CMFF–Chip Midnight’s Fine Fashions. Chip and I have the same rez day, but he’s three years older than me, and a beta member of SL. He says on his profile that he dates from “when dinosaurs roamed the grid.”

When I was a noobie, I used to visit his shop, and drool over the items there. Back then, I had no conception of the worth of Lindens, and my ability to make them and buy things with them. Chip’s most durable contribution to Second Life™ is the templates for the system clothing that were used by almost every content creator until the advent of mesh, and even now. Freelon is worth the trip just to pay homage to this great resident, and his multi-leveled, Danish modern shop. 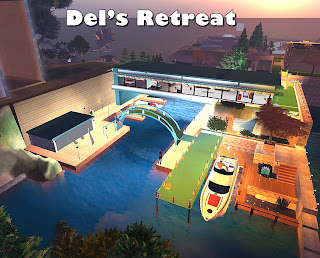 Del Lykin’s land is a sprawling marina, country club-like building and mansion. It is a pleasant build, but very old-school looking with nary a sculpt or mesh object, even though the inspected prims date from March of 2013. It seems I just missed the Amazon World’s disappearance. The late, and dearly missed Lalo Telling chronicled some of these older places on his blog, and I urge you historians to take a look: http://lalotelling.wordpress.com/2010/06/13/seconderth-a-deep-map-freelon/ .

Most of the rest of Freelon is owned by Erwin Solo, who seems to be a self-appointed historian/archivist of Second Life™. His land contains two statues of The Man statue, created by Oldjohn Linden in July of 2002! One of them holds Philip’s old beachball, which is a bit older. 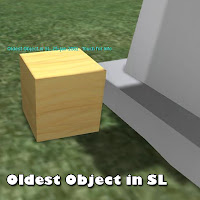 The big surprise here is the “oldest prim in SL” which sits at the base of one of the man statues. Accordning to Erwin Solo:


Oldest Object in SL. 25-Jan-2002.   Creator Unknown.  Software apparently didn’t store creator name back then. From the pre-SL alpha period.  A gift from an Oldbie, who wishes to remain anonymous.  It is just a cube, but it is copy/mod so I can make things with it. I gave a copy to the Ivory Tower of Prims for museum use.

I IMed Erwin to ask him how he came into possession of this prim, but I didn’t hear from him. Erwin has also a Mayan Temple, and a small collection of Linden Bears. For newer readers, Linden Bears were once created by and carried by all Lindens. If you ran into a Linden on the grid, you could ask for one, and would be rewarded with an object that represented that particular Linden Lab employee. Believe it or not, but Lindens used to be quite evident at events and even held some for our benefit. I have a huge collection of bears that would require a sim’s worth of Land Impact to display. 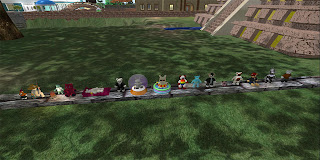 Erwin’s bears border a really nice dance floor and outdoor sitting place. It’s a shame that these places are never occupied when I come to visit. The dance floor is the nicest part of his parcel.

Tiny Properties and Premiums Only

There are a few small plots dotting Freelon. Thunder Electric’s build dates from 2003, and is still on the sim, although mostly empty. Its purple and black gothic look are worth a visit for their historical value. Just by accident, I came upon a “secret grotto,” under Thunder’s dome, that housed some interesting items, among them a prim model of oldbie Torrid Midnight. I was unable to get into the grotto, the door was locked, but I could see inside. I wonder if this spot is still in use? 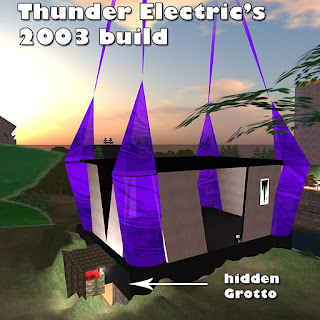 Aminom’s ultra-small Pad (“who needs more than 29 prims?”) is filled with two very bizarre billboards, one of which is depicted here.

The strangest thing I found, and only because I rezzed an alt to do some exploring, is that a small piece of the sim is off-limits to non-premium members. When DrFran returned to visit, there was no apparent reason for the banlines. The parcel contains an odd, imaginary machine, and nothing else.


The last bit of strangeness is that there is a parcel in the Northeast corner of the sim that is empty, but is named Luskwood Freelon! This 5056 square meter parcel was claimed in 2012 by the Luskwood Residents group. If anyone has any ideas what this is about, please let me know. I love these mysteries. 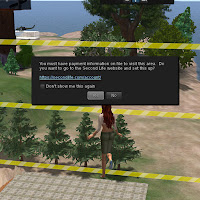 Second Life™ sims are a palimpsest. This ancient word relates to the old practice of scraping a parchment clean of its writings so it could be reused. Parchment was expensive back then. Thus, any old manuscript may contain layers and layers of documents, just as the sims of this beloved virtual world contain layers and layers of builds and memories.
Visit Freelon: http://maps.secondlife.com/secondlife/Freelon/160/68/32