Federal is the fifth sim to come on line in Second Life™. It is another sim that I have ignored largely during my many explorations of the mainland. As usual, the history and details of a sim can be uncovered to some extent by exploring and inspecting. Join me as I reveal what I found out about this largely forgotten territory. 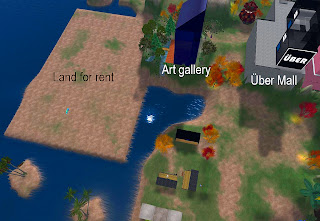 Same as for Stanford, the week before, Federal was one of the weapons sims, or the Outlands as they were called. Aside from this bit of information, all the material on the Second Life Wikia is incorrect now. Federal used to be the home of the Second Life Botanical Gardens, which are now housed on their own sim, and the Club Elite, which is not in existence any longer. I had hoped to find the Federal drawbridge still around, but I couldn’t locate it. The bridge was built by longtime resident, and creator of the SL Universe Forums and Snapzilla picture sites, Cristiano Midnight.

It seems that about half of Federal is for rent. There is a huge, flat portion of the sim that is empty of everything, except a map of old Second Life™.  The landlord for this piece of property is the same person who owns the parklands on Federal: Deltango Vale, who is not nearly seven years old—a veritable newbie in this territory of a world that began in 2002. The land title says that Cinnamon Beach is for rent, but right clicking the land gives you the information that the land is for sale for one million Lindens. Any takers? I am sure Podex will do the Linden transaction for you. 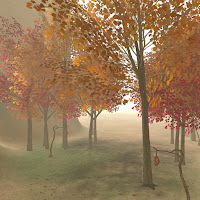 The aforementioned Deltango Vale has created a minimalist parkland on much of the sim. The trees are all autumnal, have falling leaves, and are nicely complemented by the elfy lanterns dotted here and there. I believe that this is another attempt to preserve open space on the mainland and prevent the uglification of Second Life™, and I applaud this endeavor.

There are two oldbies who still have land on Federal. Sturm Valen, over ten years old, has a piece of land, and there is a house up in the air a few meters. There are a few untextured, plywood prims in the build, so I assumed that he was busy still building. However, an inspection of the prims revealed that they were created  in March of 2003, making them some of the oldest prims in Second Life™! 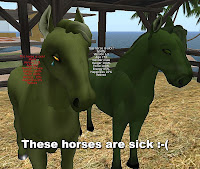 When I do these reports, I always send an IM to the inhabitants who are old-times, asking them for input. I have been unsuccessful in getting a response so far.

Simon Metalhead is the owner of MetalHead Stables and the supposedly very old Über Mall on Federal. The stables are a newer addition to the sim, as they are meant to house Amaretto Horses. Sadly, the two horses I found in the stables had turned green and were sick without food and water. 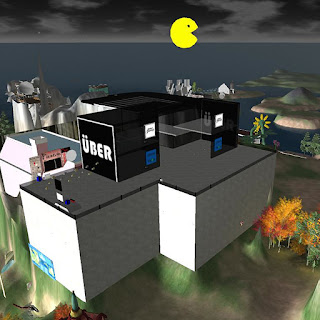 The Über Mall is a bunch of blocky cubes that rise out of a small hill that is surrounded by the Federal Park. Robert Jung, SL historian, has described it as one of the oldest malls in Second Life™
( http://www.sluniverse.com/pics/pic.aspx?id=547141 ), but unless it has been rebuilt, most of the prims date from 2007. There is very little in the mall. Basically two stores: Bowulf and Altered Visions make up the inhabitants of the mall. Altered Visions has two signs and no stock at all. Bowulf, which is the work of Simon Metalhead, has only a series of goggles, a kitchen set, and a fireplace for sale. This is one gigantic mall with only a few items for sale. This is one of the drawbacks of having Lifetime Members. They let their horses die, along with their malls.


The only item of interest that I found, by perving into the basement of the mall, was a sign for the FICs. FICs are the Feted Inner Core—a conspiracy theory that certain avatars had an advantage with the Linden Lab employees that favored them in business and other product placements. It became somewhat of a joke over time, so the sign was a fun find for me.
Second Life Art Gallery 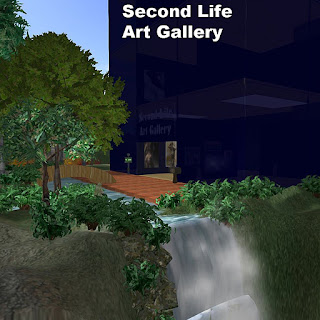 For the most part, the mall is not worth a visit. There are other things to see on the sim. The Second Life Art Gallery being one of them. You will not see a single picture from the works in the gallery here in this article, because they are all erotic in nature, and many of them extreme in nature. Of course, you may go and see for yourself. The gallery is owned by Tony Tigereye, and many of his works are there. Each display in the four stories of the gallery has a notecard to tell you about the artist. Tony’s is worth repeating:
Tony uses Yahoo! Doodle to create his colorful works of art.  A lot of his inspiration is drawn from his good friend, Porscha, and many of the works are a collaborative effort.  Many people notice the stunning over-use of male genitalia in Tony's works, perhaps leading them to believe he has a fixation on the black male penis.  Later works suggest, however, that Tony is simply out of his mind crazy and has no rhyme or reason to anything he does.

Tony’s art work is, um, infantile, to say the least. I guess he’s just having fun. Isn’t that what Second Life™ is about? Well, it is for me. Come visit Federal. Maybe you want to rent the beach.