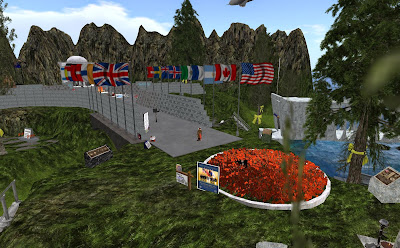 Tuesday November 11 was Veterans Day, and like other major holidays it saw some events on the Grid. The most notable exhibition was the Second Life Veterans Tribute. Constructed every year for several years, this year it was in a quarter of the Kajam sim. The starting spot was in a field of poppies, one of the symbols of Armistice Day in England. 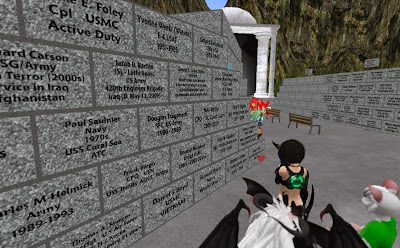 The main part of the exhibition was the Memorial Wall. Each brick had the name of a veteran, alive or deceased, or sometimes they had the names of groups of veterans. Visitors could offer the names of veterans they know. Names on the wall have gone all the way back to the Revolutionary and Civil War. Among the soldiers on the wall was Lothi Aeon, in real life Jacob D. Borton, whom was murdered on May 11 2009 in the attack on Camp Liberty while trying to protect a comrade. 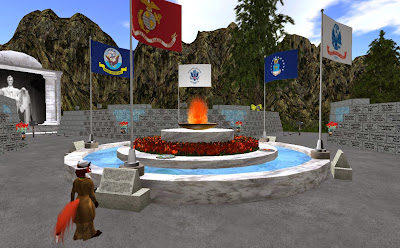 In the center of the Memorial Wall was a tribute to the five branches of the American military, with a description of the history of each flag. 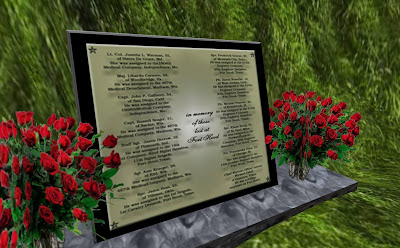 There were a number of smaller memorials, such as this one of the Fort Hood Shooting in Nov. 2009 in which thirteen soldiers were killed. Other memorials included one to Canadian veterans, and one for Pearl Harbor. 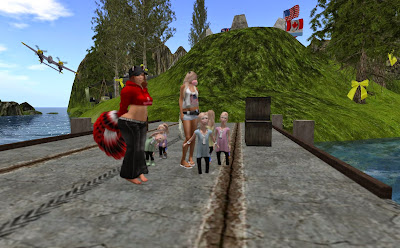 People dropped in throughout the day, such as this group of two adults and several child avatars. 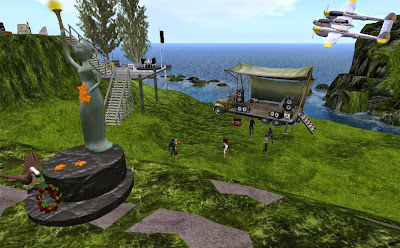 The Veterans Tribute has been the scene of a number of stories. Particuarly moving was the interview of one Marine as he described how several comrades of his met their end in the Middle East.