Originally published in May 19, 2008 in Second Life Newspaper

One of my friends from the Second Life Tour group, Delaynie Barbosa, told me about one interesting sim, Silverscreen. 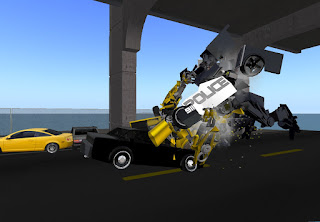 At the teleport point, (145, 147, 33), one finds a huge amphitheater with a four-sided media display screen, which dominates the central island. Currently, it plays media of a trailer for the "Iron Man" movie. Four other islands  make up the sim. Besides flying over, one can also take a tram to and from there to the main island, which can be called over by posts at the edge of the islands (don't forget to sit in them).

The island to the southeast has an "Iron Man" prim statue and a free Iron Man avatar and AO (which you can also find behind you at the teleport point), as well as another media screen for the movie trailer. The southwest corner has a scene from the "Transformer" movie of two of the robots in a fight, Bumblebee and Barricade, as well as two free avies of them. 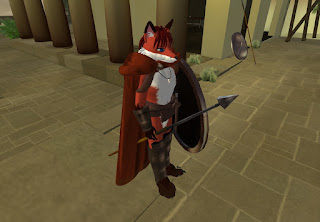 The northwest island is for the latest "Die Hard" movie, a scene of a fighter jet firing at a truck on a bridge. To the side are a few freebie items and teleports to other parts of the sim. The map shown suggests there were more "Die  Hard" exhibits in the past, but about all that is left of them is the free "Warlock Room" building under the central amphitheater. The northeast island is for the movie "300," a scene of some Ancient Greek buildings. One can find a free Spartan warrior outfit there, and look for the helmets, spears, and the shield elsewhere there. And like in the movies, I found a "blooper" there. On the floor was a smoldering cigar - not exactly something one is supposed to find on an Ancient Spartan set. ;-) 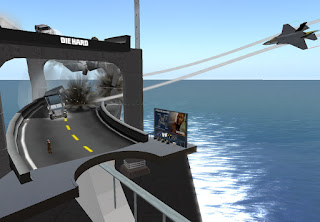 Silverscreen also has a group of the same name. The group charter says "Silverscreen is a multi-purpose event and exhibition venue developed and managed by Picture Production Company (PPC). Silverscreen opened to the public in March 2007, and has since hosted Q&As and expos for movies ..." The founder of the group, Danyboy Lightfoot, calls himself the manager of Silverscreen, "I've been involved in bringing movies including 300, DIE HARD 4.0 and Transformers into Second Life." He is also with the "Transformers" sim group.

"When Second Life went to the movies" is what one might call this place and time. The place was made at a time when real life companies were looking to the virtual world as a place to advertise. Within months, places like this would be pretty much a thing of the past. Yours truly still has the "300" outfit and "Bumblebee" avatar.