Journeys Across the SL14B: Resident Exhibits at Electrify 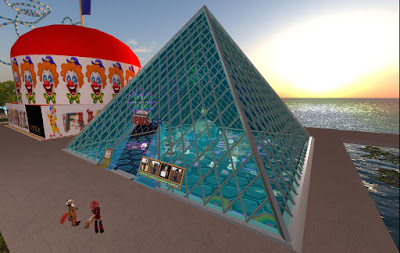 There's much to see at the Second Life Fourteenth Birthday. Earlier, I mentioned the welcome area of Dragon Mountain and the stages. But "The Birthday" is more than that. There's also the resident-built exhibits. The Newser has it's own, built by Silvia Ametza in SL14B Electrify. But there's many many more. 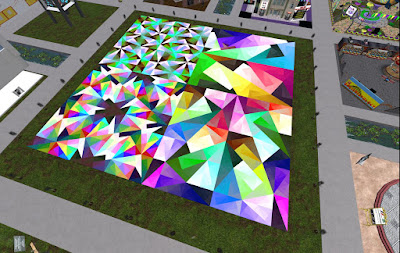 In the middle of the sim was it's art exhibit, the Pinwheel, by Mac Kanashimi, "Sixteen pinwheels of 125 equally shaped triangles tile the 64 x 64 x 0.5 meter parcel, displaying a continuously changing color pattern of 4 pictures." 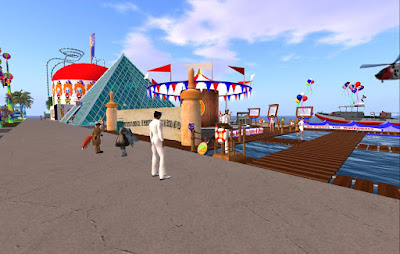 Just north of the Newser exhibit was the one from the Second Life Coast Guard. 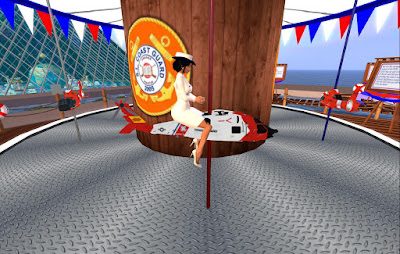 There was a merry-go-round with Coast Guard craft in miniture, instead of horses. 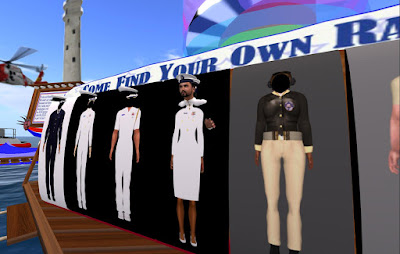 "Find your own rank" had people going up behind pictures of various uniforms, with a hole where the face would be, people inviting to stick their heard out. But sometimes the results were amusing, "you look good in a skirt." 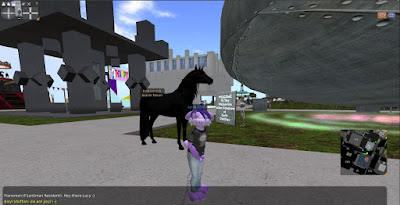 You never knew who you might meet walking around, maybe a Linden, a unicorn, or both. 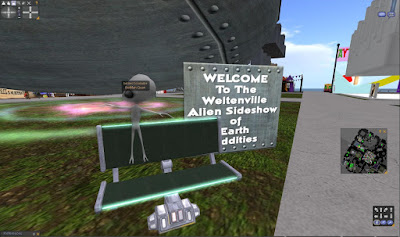 Nearby was the "Weltenville Alien Sideshow of Earth Oddities" by NorTonJohn Hellman. 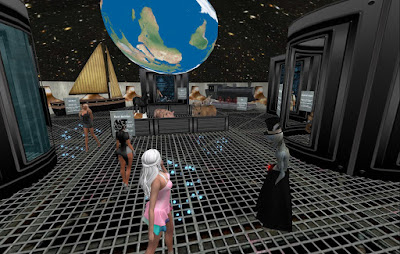 This alien spacecraft was showing off items as aliens might see them, such as farm animals,
"Abducted 1950-2017. Traits: used mainly as food or transportation, smelly." Or various captive humans, such as a biker, "Abducted 2015 near Roswell NM. Traits: aggressive, travel in packs on loud craft." 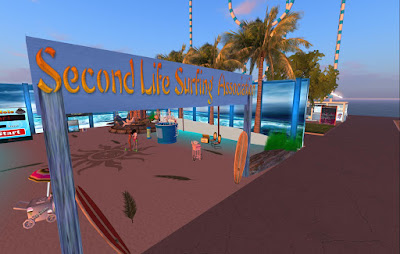 Also nearby was the Second Life Surfing Association's exhibit. 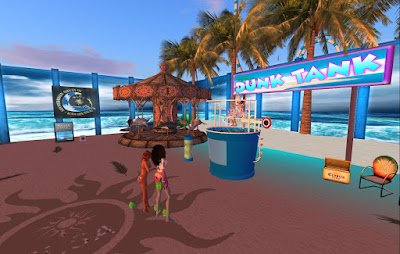 There were fun things to do there, such as rides and a dunk tank. There was the "Rocket-Go-Round" by the National Space Society. 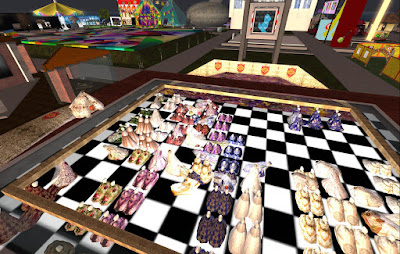 Further away, there was an exhibit that was a game that was running on automatic between AI, made by Alisha Ultsch, "This is a game called Romanov Go, loosely based on the Chinese game Go.  Eighteen potential debutantes to the court line up in full Russian Court gowns with long trains each supported by six maids.  Each girl in turn may make a move which can be either a walk 2 metres forward or a turn to face left or right.  However turning completely around 180 degrees is not permitted because of your heavy train holding you back.  The order in which the girls move is chosen at random at the start of the game and remains the same throughout. 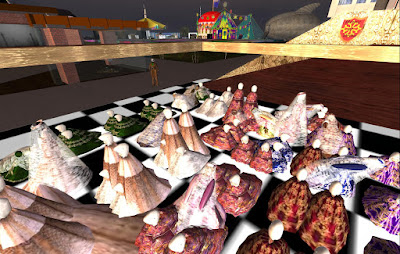 "The idea of the game is to surround the other girls so that they cannot move on their turn.  If this happens they lose a pair of maids who kneel down where they are and block that square from then on.  Once a girl has no maids left she herself will next have to kneel down to add to the blockages forming all over the playing area." 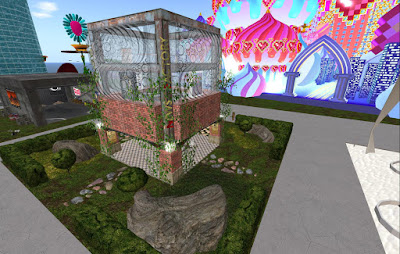 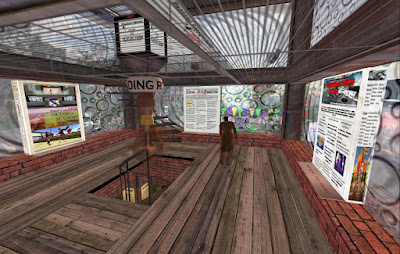 Jazsintha was encouraging residents to make publications of their own communities. When I ran into her, she requested, and got, an SL Newser newspaper stand. 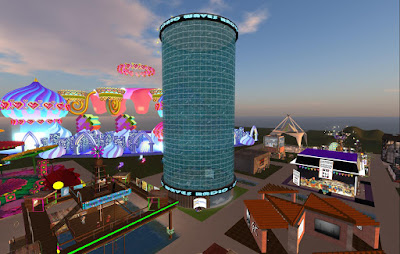 The tallest structure in the sim was the "Radio Waves" tower. 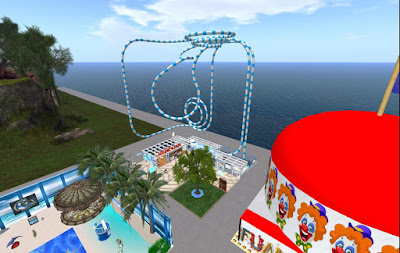 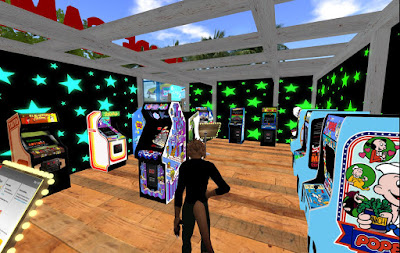 There was a video arcade with games, though to play them you needed the latest version of Flash. 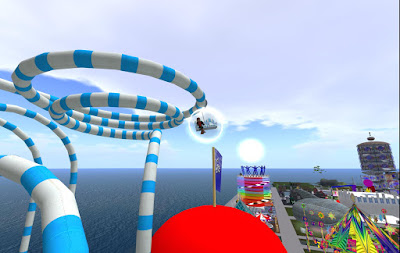 But the main attraction was their roller coaster ride. 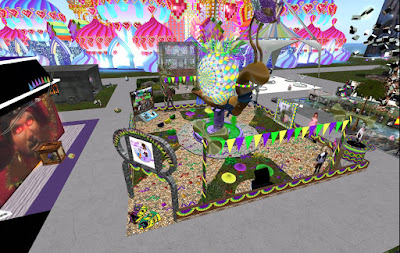 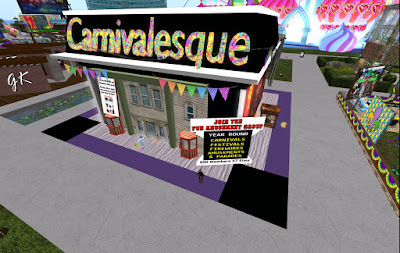 This one by the Fun Amusement Group gives people a number of landmarks of fun-themed locations, the group is open to all to join, and had announcements for a number of places. 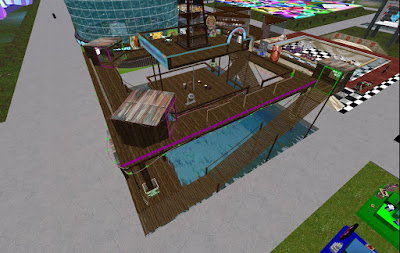 Water World had an above ground pier walkway. 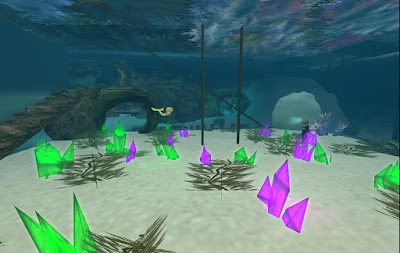 And there was water one could go into, free diving suit provided.

There were many other exhibits at the sim, and of course there are the ones from the other sims. So stay tuned for more about the Second Life Fourteenth Birthday celebration.