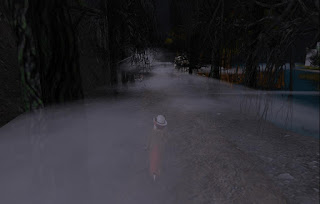 Victorian/Steampunk and Halloween can sometimes make for an interesting combination. It was the 19th Century in which the classic horror stories Frankenstein and Dracula were written. While science was starting to reveal much more about the world compared to the past, there was much still unknown and seances to contact the departed were more common than today. With this in mind, there are a couple spooky Halloween places in the Caledon estates, the land of Second Life's largest Steampunk community. These are Star Estates in Caledon II, and Caledon Downs. 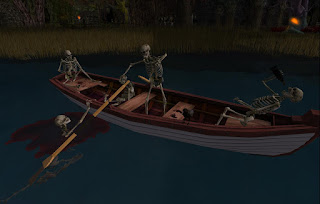 Duchy Cynthia Farshore and Star cordially invites you to Caledon Downs and Star Estates, Tamrannoch for a sim full of Halloween fun going on now. There are many, many horrors and hunts with prizes. Caledon Downs is still building up so explore many times to see new sights.

The Caledon Downs Haunted Land is a scary trail that starts in the northeast corner of Caledown Downs, just off the railroad. The path goes down some spooky woods, with the mist getting pretty thick at times. And the thing about misty nights is you don't see trouble, until you're almost upon it, or it's almost upon you. And the trail has it's share of frights. But it also has some prizes. Around the place are some pumpkins. Click on them *once* to get some prizes. Click on them twice, and well, you'll find out. 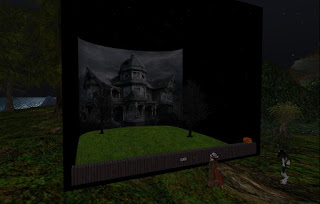 And this isn't all. If you're in the mood for a little ghostbusting, there is a ghostly shooting gallery out. Just click the gun-giver for a spider gun, and you'll be shooting arachnids at the apparitions to drive them away (you'd freak too if a spider landed on your face). The high score is listed for you to try to beat.

Cynthia says she plans to add more to the trail between now and Halloween. So more trips will reveal some new surprises. 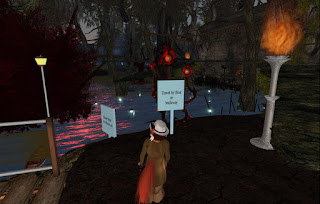 Star Estates has it's own haunted trail in the Caledon II sim. I came across this in the daytime, but it was still unnerving as it started off with some eyeball thing starring at me. Early on, you're told to look for an orange cube, and given a choice of taking the trail by foot, or by boat. I chose going by foot, going down a wooden walkway over the water.

I had to pass some scary sights, but eventually made it down the path, to a spooky manor. inside were more scary sights. There were plenty of zombies, ghosts, skeletons, and other monsters. I never did see that orange cube the first time down the trail. Maybe next time. 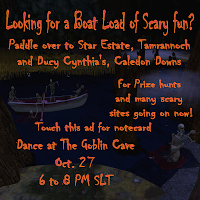 Getting back to Caledon Downs, Cynthia Farshore has a Halloween party planned for Saturday October 27 from 6 to 8 PM at her Goblin Cave. She announced, "The music will play across the whole sim of Caledon Downs so one can explore the sim and still be entertained."