I have been wandering the grid looking for diners for a while now. It’s funny that I forgot one of the first places that truly entranced me in Second Life: The Frootcake Diner. This place was the first encounter I had with in world gaming, and I have to say that it was the first time I enjoyed playing a game in world. DrFran is not a gamer. I wore more boxes on my head as a newbie, than I have in my inventory now. If you haven’t been to The Frootcake Diner, you have to TP there now! 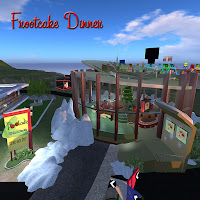 The first thing I loved about The Frootcake Diner was the design of the place. It is built in a Jetsons-style fashion of futuristic 50s, with lima bean shaped tables and booths spread about the place. The center of attention is the game table in the middle of the floor. According to Ripken Habsberg, the creator of the diner, Frootcake the game is based on Geschenkt by Thorsten Gimmler. The beauty of the this game is that like the Chinese game of Go, you can learn how to play in five minutes, but learn strategy for the rest of your playing days. Also, you can easily blame your loses on bad luck because luck figures highly in the game.

I will not detail the rules of the game, because if you go to The Frootcake Diner, you can watch a video that explains the game, or get a notecard with the details of the rules. The winner of the game is the one with Frootcakes that add up to the least amount of points. You can play the game straightforwardly, or you can be spiteful and extortionist. It’s up to you to decide.

Frootcake is also a social game. It cannot be played unless there are three or more participants. For those of you who are looking to get closer to friends, or maybe alienate them through spit and extortion, this can be a help. Once three folks are seated, you get a HUD that allows you to pass on or keep the frootcakes, valued in points from 3-35. 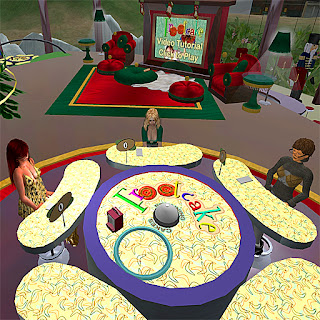 Let’s face it, with the holidays a dim memory it’s just a matter of time before you will be passing along your frootcakes. If you haven’t been to the diner in a while, or have never had the chance to pull a stool up to the Formica tables, why not give it a whirl?

The diner was built by Charter Member Eggy Lipman and Moon Adamant from Beta Technologies.

Department of Corrections: I heard from two of the people about whom I wrote in last week’s diner story, and they sent me corrections to some of what I thought were facts:

Sharon Scofield from Sharon’s Diner IMed me after reading my article to say: “Let  me give you two things to correct, though, we've been here since 2008 rather than 2006, which still isn't shabby yay me, and the Gogomodo trivia is just automated practice trivia—the paying trivia is live and written by that day’s host.”

And, finally, I was contacted by Felizitas Barbosa, who told me that I had listed her as a co-owner incorrectly.

Ooops and sorry to both of you. DrFran wants always to give you the true news, the right news, and all the news.