By Grease Coakes
By looking through notices (and I get a lot of them) I saw a notice for a Native American music event at 4pm SL time. This seemed neat to check out. Curious, I talked to my buddy 2 medicines on the Spirit Nations sim I go to hang out with Heart Speaker and others for his weekly gatherings. 2 medicines and I chatted for a little bit and wanted a hug from me in her child avatar. I eventually found out where Rawhide was by asking “Where’s this live music event?” in the Spirit Nation chat. I got a LM right away from the owner LittleStream through IM. I showed 2 medicines the LM and I warped over wanting to check it out. 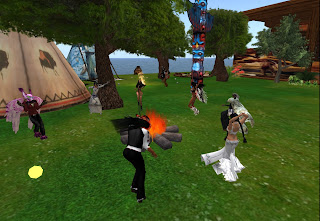 I found a green field with a few shops in sight. There’s also a country bar close by as I was greeted by the owner LittleStream. I said hello and asked about the event I want to check out later. LittleStream says that she created her club a mere month ago with the owner Topper Redfield as a hangout for Native Americans. I certainly got the western feel as I explored around. By the other end of the sim I saw some teepees as well.
Wanting to dress right for the event I looked around and saw some vendors. A lot of them sold clothes for women, but towards the end I found some men’s clothing befitting the western or cowboy motif that the club was all about. When I found something that looked cowboyish, a red cowboy jacket, I bought it for a mere 199L.  What was interesting that Littlestream thought I was a fox. This is true as I do have a fox animal totem; however I was walking around in a griffin avatar instead. When I explained what a griffin was she expressed that she was honored that I visit her club as a part eagle avatar. She then explained that her spirit animal was that of the eagle (like in her profile picture she pointed out) a powerful animal totem in Native American culture. Also she said it is against the law for anyone who is not a Native American to own bald eagle feathers. 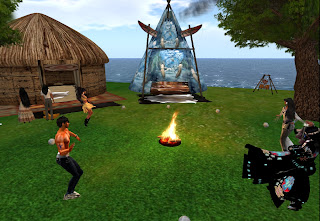 When I asked LittleStream about her spiritual experience later on she explained that suddenly was able to write and understand Native American words. LittleStream said that she is not a Native American by birth; however she said that her eagle spirit led her to this path.  She started a jewelry business and had the urge to work with turquoise and Native American beads. Over time LittleStream said she saw visions of a plain or a special place where she met with a brave. As time went on, her visions were stronger as she saw her father as a medicine man and many tribes. She thought she had a brain tumor at first but later one she figured out that her present life and past lives were merged together. I said that must have been unsettling and she agreed with me. She recently joined Second life as a new avatar and met with someone named Eaglefeather who says they are connected in a way but won’t say how.
She created the rawhide club as a place for Native Americans to hang out at. She invited me to her club group and encouraged me to stop by at 4pm SL time. I went to a sandbox and grabbed the clothes I bought. I was impressed for 199L I had a nice looking cowboy outfit a cowboy shirt jeans and a belt. I logged off for a while for some time away from SL and came back on for the Native American dance. The music itself was very relaxing and put my mind at ease. 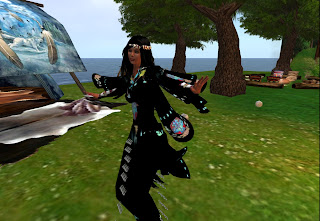 When I came back on, there was a slowly rotating circle of poseballs by the fire. The DJ Mountain String spoke in voice and said he only played Native American music. He also warned be careful not to watch the rotating dance too long or it might make you dizzy. I cheated by writing this article during the dance event so I wasn’t always looking at the  rain dancing avatars When you jumped on one of the poseballs your avatar slowly danced around the fire along with others who joined in like a rain dance. 20 minutes past 4pm SL the slow dance circle was filled.
It was a joy to listen to Mountain String’s music as he played a lot of ambient music with flutes and some rock songs. A lot of the songs talked about Native American beliefs and their way of life I heard words like warrior and sacred circle along with mother earth. Or songs about being a certain tribe like Cherokee and Lakota. A lot of the avatars dancing with me were dressed in high detail Native American clothes.
It was something fun to experience goofing off and telling stories when I could with Heartspeaker and others was one way to experience native American culture at the Spirit Nations sim. Being to a Native American dance was a whole new experience. LittleStream’s club also plays soft rock. Stop by the rawhide if you get the chance if you’re looking for a new club hang out at, or something new in general.
Grease Coakes
Posted by Bixyl Shuftan at 6:00 AM