While at the Virtual Worlds Best Practices in Education Conference, I met a Joanne Kimono. Joanne told me she was with a place in Second Life, Africa Live, and offered to show me around.  I answered yes and agreed to meet later. 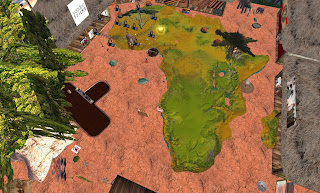 The landmark I was offered took me to a platform over the Estings sim. Showing up a little early, I ran into a feral avatar. While resembling a lioness, the name suggested an American critter rather than an African one. "Hello," Puma Clarity greeted me, and was happy to tell me about the place, a number of shops, with some freebies, around a three-dimensional map of Africa. Over where Ghana, Togo, Benin, and Nigeria would be was a teleporter to the sim below. Puma explained there was a village there based on a real-life one: Ganvie. 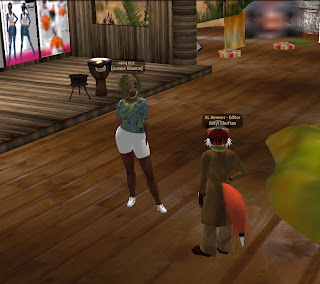 It wasn't long before Joanne showed up. Chatting with her, she explained that not everyone in the Africa Live group speaks English, some spoke only French. She described the "Africa Life" group as for "a number of real-life African people, as well as lovers of Africa." She explained the major builder of the place was Bafana, whom was from Africa but currently in France, "he has given meticulous care of Africa Live group." Another leading person there was Solylence Houston, "African lady, great Second Life designer of fashion."

The skybox area itself was called "Imagine Africa," and looking up had a poem in French over it. "A great deal more is below here," Joanne explained, "a village on the water." Going down to the surface, the village was indeed built over water with the buildings, many of them with thatched roofs. We were next to the largest of the buildings, "this is the Cafe concert where there are poetry readings … the group holds DJ and live music parties here." The club had a large dance floor area, and stairs leading to a second floor, "above us are real-life photos from Africa in the gallery." 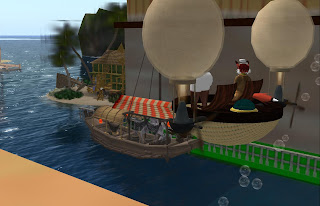 "There (is) nature around as well," Joanne explained, "ecology beside us is Artemisia Mathy's land. Terrdemoise has a beach, and  Tubal Amiot, also Africa Live french member, has store and dancing." She explained Artemisia was one of the Africa Live group's co-owners. In the background, much of the music played was by musicians with French-sounding names such as C' La Radio, and Ben L'oncle Soul.

For touring around the place, Joanne and I went to an "areo-putter," a basket with two balloons, and a prop. We got in, and it took off, "Great off we go. This is beside the Linden Sea protected land." She then pointed out among the thatched-roof buildings, a blue one, "This tikki is called Blue Mansion. (It) has nice french poems from member Iphi." On a beach island reachable by walkways, there was a group of pictures, "Ahead is the AIDS art exhibit," a reminder that the Pandemic still has a hold on Africa, "we did have a DJ who is involved in effort to educate people." 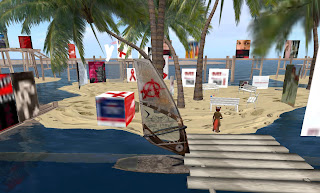 "We wish to keep the community a water village," Joanne told me, "there are homes for rent that Tubal Amiot offers for those who do not have a premium membership to own land here." She told me it was modeled after Ganvie, but was unsure how common these kinds of villages were in Africa. She pointed to a body of water, "also, here is a good place to go sailing. Tubal offers nice Yacht free to sail here. I was sailing earlier today here, is fun." There was also a zipline, which Joanne called, "my favorite."

She also pointed out another area for education, "Here is ecology about (the) Fukushima disaster in Japan. This is the beach (of) Artemisian TerreDarmoise. Arte is french lady who is conveying educational ecology info here." Pointing out one two story building, "inside the second floor are real-life photos of war in Africa." 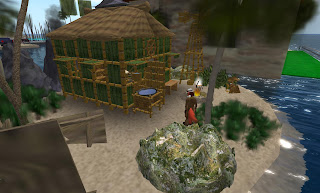 The areoputer ride soon came to an end, though resulted in an accidental dunking, "Sorry about the dunk. You are now baptized (giggles)." She told me there were some free clothes here if I felt a need to dry off in a hurry, "this wall has a nice balloon outfit which another avatar can rip off your body, sort of fun." There were also some summer outfits, photos of the real-life Ganvie, "as well as nice view of the Linden sea. (smile)" There was also a free wood canoe, "called pirogue. It is an excellent way to see the village. It will propel itself, and will not poof. So please … take the pirogue back when done (smile)."

Africa Live's social area holds regular events, "is open to hosting DJ parties." Joanne told me they are looking to hire DJs. While fluency in French isn't a requirement, it is a plus in a group with a number of Francaphones. 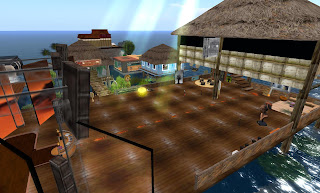 Africa Live has been in Second Life since at least 2007. When Joanne joined in 2008, the group only had an art gallery selling African art. Since then, it expanded over time to what we saw."

Joanne and I talked for a while. I had wondered if many stopping by had misconceptions about Africa, but it was her observation most had their facts more or less correct of the basics." She had heard of Grey Lupindo's African Safari article, and was happy there were other places offering information about the continent.

"We could go on for days … great kingdoms of culture, and art, for now we got plenty, and welcome all. The future looks bright. (smile)"