I had mentioned finding a shop at Mont Saint Michel, in my previous article, that sells great medieval armor and how I just had to buy some. When I finished my explorations there, I went home, unpacked my souvenir and put on my shiny new armor. It's nearly perfect, but for one small problem. I was now faced with the age old dilemma of being "all dressed up with no place to go.. In my many adventures, I had been in a few medieval sims, but never crossed paths with any Chevaliers [French for Knights]. Perhaps, I thought, there would be RP sims where knights gain fame and honor, by kickin' canned cans. By now you know, my next move was a visit to the second life destination guide. 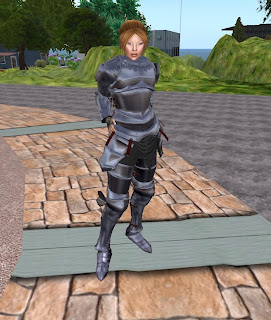 A word of warning, before we take one more step here. In the last month, secondlife.com has become more scary than any sim inworld. They now are filled with pop-up adds, that will infect your computer with a host of malware. DO NOT GO THERE without protection. OK, public service announcement done, let's move on.

I did a search of places, using the keyword "knight". That produced a list of about four dozen locations. Of those, the majority seemed to be places to shop. I trimmed the list down to eight places to explore. Two of them actually said they were for role play, with the remaining ones being of questionable value. One was called, AKK Horse Ranch. When playing chess in Texas, the knight is often called a horse, so if I'm looking for knights I better check out horses while I'm at it. Having opened that can of dogfood, I might as well start with discussing horses first.

About  AKK Horse Ranch horses, unlike "breedables" these horses do not require feeding. Knowing that I would not be engaging in any actual RP, just reporting on it, I was only here to see how they looked and how much they cost. Most of the horses come with either a western or English saddle and cost L$2000. They also had a group, called EZ Start Horse, for $500. Their most expensive horse was a skeleton (literally), for $4000.

Next, you'll need the armor, sold separately, ranging in price from $600 to $3600 for beautiful, ornate unicorn armor. They had a floor model that you could sit on, which I did for the included photograph. The sign says it can be resized to even fit tiny avis and the cost of this ready made war horse was a mere $3500 (ouch) and it only came in the one color combination shown. I confess, although I promised myself, after having bought armor, not to spend another penny on this theme, I did return, several more times to drool over it. I saw a free demo, one to customer, good for five uses, which I got and tested. Still in sticker shock, I went back to the marketplace and got demos for four other brands of horse, the working models of which ranged in price from $475 to $1,999. Ultimately, kicking myself in the butt all the way, I returned to AKK Ranch and bought, separately, the AKK '09, in white, for $2000 and Silver chainmail tack for $750. I saved $750 and got the colors I wanted. I figure I got three horses for the price of one, given that I can make copies and have one with armor, one with western saddle and one bareback, which will be handy when I go riding on my property in the Everglades, heehee. Enough about my spending habits. Let's get back on the topic of RP sims. 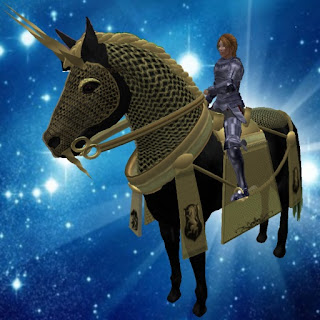 First of all, when you find a RP sim that sounds good, in most cases, the LM won't take you directly there. Your first stop will be a "Gateway" or welcome area. Clicking signs there, you will get notecards, explaining their history, the rules of play, the type of battle meter required, if any, ie,

Moving on, we come to "Avilion Nexus: Medieval Fantasy Role Play Community" found at Avilion Nexus (128, 128, 251). To combat here, you will need a combat meter, either
Posted by Bixyl Shuftan at 6:00 AM