Although there is little that I will say about Welsh that may not have been said before by the late Lalo Telling or Alex Hayden (see  links below), I still went to Welsh. I did this because of all the sixteen original sims of the original post-Beta Second Life™, Welsh is the one that retains more antiquity than any other place on the grid.  Welsh also seems bigger than most sims, maybe because it has a lot of parcels on it, and a lot of water between them. Each time I thought I had finished my explorations I found something else I hadn’t seen before, even builds by the resident avatars of Linden Lab employees! It seems that back in 2005 it was permissible to have an alternative account that was known to other residents, even though its owner was actually working for Second Life™. Imagine interacting with someone on the grid in a social way, and knowing they ran the show. I am sure some of you remember those days, but most of you will read this in disbelief. Please read on for more, because Welsh holds more secrets than I could unearth.

As always, in preparation for these articles on the early sims, I conduct “research” on their history. This is not always easy to find, and in the case of the Welsh, I really had a difficult time digging up information. I always check the photos on Snapzilla, but these only go back to 2005. However, the views of Welsh depicted in the photos there show a sim that is barely changed from its origins. Here is the reason why: The majority landholders on this land are the same as they have always been, and include the very first public, non-Linden resident—Steller Sunshine.

Steller Sunshine, born March 1st, 2002, was a Beta tester, and has left a mark on Second Life™ that persists to this day, with prim builds scattered throughout the grid, but focused primarily on Welsh. I have never seen her in world, but I have been told that she still logs in occasionally. Somehow, Welsh has managed to remain mostly in the hands of the original members. Some of the Welsh Land group members are very early adopters:

What is so astonishing, is that many of them are still around, and still have builds that date from 2002 through the present, comprising some of the oldest builds in Second Life™. Some of these builds were actually saved from the Beta Grid and rezzed in the first sims when they came on line.

The Climbable Beanstalk and Steller Sunshine 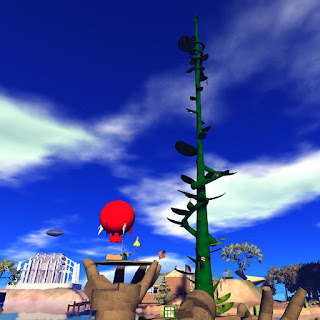 Steller Sunshine’s masterpiece of building and gaming is the Climbable Beanstalk built in July of 2003 (NOTE: Actually it was built in 2002 in Linden World, and re-rezzed when Second Life™ went into Beta), and still standing and taunting those who would try to make it to the top. I have met many residents who have tried to climb to the top of the beanstalk, but none who said they had done it. If climbing and failing is not for you; trying to play tic-tac-toe might work. Whatever you decide, please remember that this build was completed without mesh or sculpties, and it still has a sophisticated look. Did I mention it’s a real challenge to climb it without flying?

There are many other objects on the island that were created by the first resident. My favorite is a giant View Master that is for sale on the sim. I remember this object from my childhood, when it seemed so futuristic. Back then I dreamed of virtual worlds, but they were the stuff of science fiction, and not something of which one day I would be a part. 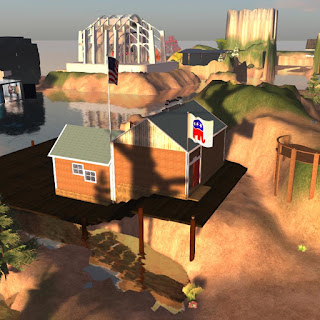 Dawson Murphy was an early adopter of Second Life™, but not as early as many of the residents on the list above. However, his footprint is large and remains on the sim. Dawson’s home, Dawson’s Dive, is a museum of old prim builds, and a few political references. A large Republican elephant flag and American flag fly over the simple cabin on stilts, and the inside contains items that range from 2002 to 2006. There is a portrait of Dawson and first resident Steller Sunshine (who provided the 2002 chair in Dawson’s dining room), and a THiNC book with an autograph of Newt Gingrich. A textbook on dynamic HTML shares shelf space with leather bound classic volumes like Anna Karenina. You can also view Alberto Linden’s October 2002 glass and chrome coffee table in the living room.

Below, I talk about how nice it was in the days when the Lindens interacted with residents, and you could call upon them for help. At the time of my visit there was an alpha megaprim rezzed over much of Dawson’s land, that I abuse-reported, but upon last check it was still there. Sigh. 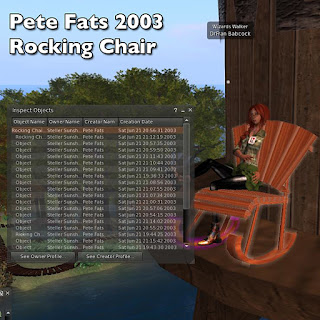 Pete, a Charter Member born April of 2003, has some prims on Welsh that were created in 2010. They seem to be the makings of a waterslide, but remain unfinished. There are many of his prims littered about the parcel. I found this very funny as one of his claims to fame was a test of the Linden’s anti-griefing attempts, that took place in 2003. I came upon an archived forum stream ( http://forums-archive.secondlife.com/120/f4/8110/1.html )on the subject. Apparently, Pete rezzed some self-replicating ants, logged off, and waited for the fun to begin. Early residents, such as Maggie Miller (May 2003), delighted in recounting how two Lindens had to come and clean up the ants one-by-one. Reading this made me nostalgic for the days when you could enlist the aid of a Linden in real time.

Pete’s influence is seen subtly throughout Welsh in the chairs from 2003, and other items on the sim. I spent some time sitting on one of his rocking chairs atop a new, for this sim, water tower created in 2007 by Steller Sunshine. 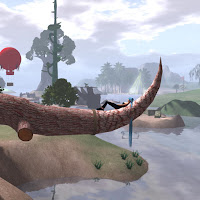 Saaz was born in August of 2003, and two of his builds endure on Welsh. One is the Sand Castle, and the other is a Whack-a-Mole game, at which I failed. The Sand Castle is a simple build, with great historic value. If you find the two bright green arrows just over the door to the castle, you can teleport up to a sandbox platform, that is filled with items from many residents, or to a “particle-thingie” which seems to be a control panel that has yet to work for me.

Saaz also has a tropical home on the sim, but my favorite part of Saaz’s parcel is the lounging tree he has. You can bask in the shadow of the beanstalk, and listen to the birds, and feel good about doing nothing.

Twerke Underhill – The Merchant of Welsh 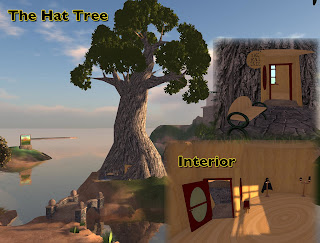 The Hat Tree stands on Welsh where it has stood since the earliest days of Second Life™. Twerke Underhill has never wavered from his commitment to provide classy chapeaux to the fine residents of SL, and to do it in a build that I found delightful and fantastic when I was a newbie. The tree that houses the shop shares the skyline of Welsh with, and adds a nice counterpoint to, the Climbable Beanstalk. It sits atop a small island accessible from a charming, legacy prim footbridge. The most recent hat dates from 2006, with most of them from 2003. Thus, if you buy a hat—most of which cost less than 15 Lindens, you have bought a piece of history. The tree itself seems to have been renovated in 2006, but the upper branches are from 2004. This leads me to believe that a different Hat Tree stood here, before Twerke rebuilt it. A little research on Snapzilla shows a store that is a bit different, and more isolated on the sim: http://www.sluniverse.com/pics/pic.aspx?id=13938 . (Thanks, Torley)

buTTONpUSHER Jones and The Secret Labs 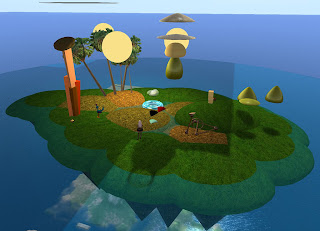 I stumbled upon the ominous-looking laboratory of buTTONpUSHER Jones (2002) as I wandered Welsh. It is nothing more than a pile of black boxes climbing into the air. I walked around it until I found a small door, and walked into a mess of projects and moving items. Obviously, buTTON is a mad scientist, and his work is all around. Historically, he is famous for his XYChess game, which is available free in his lab.

I would have never known about another part of this parcel had it not been for my attempt to return to the lab, and an inpatient rush to be inside it. I couldn’t find the door quickly, so I cammed into the lab, and saw the seat icon pop up near a small tree stump amongst the many prims. I clicked to sit, and found myself up in the air at 286 meters, on a lovely suspended island filled with more moving parts. This was a happy accident that I recommend.

For a look into some of the earliest days in Second Life™ you can browse  buTTONpUSHER’s Flicker stream. Sadly, many of the pictures lack descriptions, but there are some from Christmas of 2003: http://www.flickr.com/photos/buttonpusher/with/42921773/

Just as I was about to wrap up my explorations, I realized that the ethereal cathedral-like build that was in the background of many of my photos was actually located on Welsh. The builder BuhbuhCuh Fairchild, or BBC, was a name that seemed familiar. The build itself, seems to be a FIC temple. FIC, or Feted Inner Core is a name given to those residents who seemed to have a very close connection to the Lindens, and were granted special favors.

There is an odd sort of irony to this build, as my research seems to indicate that BBC is actually a Linden himself. Seems that in the early days of SL it was fine to mingle with the residents, and to have an alt that was known to be a Linden by other residents. This entry in Buhbuhcuh’s profile was the first thing that made me wonder about him:

“I’ve seen things you people wouldn’t believe. Attack hippos on fire off the shoulder of Ahern. I watched Lindens glitter in the dark near the Heteroceran wall. All those moments will be lost in time, like scripts in the asset server.”

Buhbuhcuh even had a blog of his own in which he spoke candidly about the lab, astonishing now for its transparency. Here is a small piece:

“I plan to use this blog as a place to publish some of my thoughts about LL and SL, but I also want to use it to help people understand how and why we Lindens do what we do.  I’ll be happy to answer any questions I can here, and if I can't answer them, I will tell you why.”

Oh, and by the way, Buhbuhcuh is actually Ben Linden. Surprise!

Odds and Ends: Newbies on the Sim

With all of these oldbies on the sim, it’s strange that residents from 2006 are considered newbies. That said, Chloe Mineff’s Water Gallery is a worthy place to park your avatar. There are works from several SL artists, among them Bryn Oh, and the simple seating in the center of the build allows one to look at the work and rest those weary feet. I really liked the way the semi-transparent curtains that surround the build waft delicately, adding a nice feel to the whole place.

I could go on forever about this sim, but if you are a history buff like me, you will make sure it is part of your travels. Come live the early days of Second Life™ on Welsh.