It has been a long time since I have explored the original sims, but the tenth birthday of Second Life™, and the annual Relay for Life both kept me very busy. Once all of that was over, I felt a letdown that was like the post-holiday blues, but I knew that I would find the spark again by going back to the past, and Taber is just the sim for memories, as you will read. 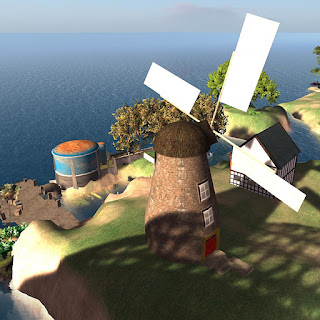 Taber is famous for being the home of Robin Linden—who joined Linden Lab in 2002, and for being the site of the first casino in Second Life™.  Ama Omega was the creator of this establishment, and his excellent scripting skills led him to go on to create a particle script that I still use to this day to make down and dirty effects. Ama Omega became a Linden, even though his casinos have left the mainland (well, at least they are supposed to be gone).

There is one historical piece of architecture on the island: The D’Ni Restoration, with prims that date from 2003. I believe it is from the game of Myst. It was built by Piprrr Godel, and it is owned by Avi Arrow, previously interviewed in these pages. She is a fan of Second Life™ history, and has done much to preserve its antiquities. 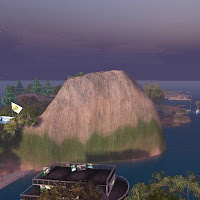 The Justice League has a parcel of land on Taber just to the west of the Ivory Tower Library of Primitives.

The JLU claims they are a benevolent organization designed to protect and help newcomers. They are influenced clearly by Superman, as their leader is named Kalel, and the radio station they operate is called Krypton Radio. However, I have never recently run into anyone from this group, nor do they seem to have had a team in the recent Relay for Life, although they have a Relay flag flying on their parcel.

Something about their Group Profile disturbed me: “We are a public service organization, helping those in need of aid, keeping a watchful eye while closely observing the Terms of Service.” I felt myself wondering if a group of residents had the right to take it upon themselves to protect the Terms of Service. Oh well, maybe I am being paranoid, but it seemed a little strange to me. If anyone knows anything about this, please contact the SL Newser.

There isn’t much to see at this build beyond an outside auditorium, that I have never seen occupied.

Who Lives Here? Odds and Ends 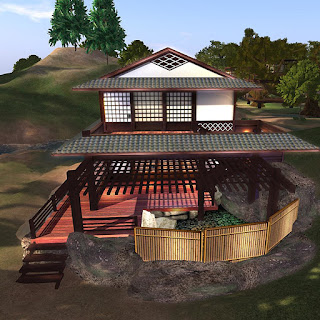 Taber from the air looks mostly unpopulated, and at sea level that seems to be the case. There are several parcels that make up the sim, but many of them are devoid of objects. There is a nice island for sale if you would like to own a piece of history. I would buy it myself, but don’t want to bump up to another tier level.

The Banana Land parcel sports a nice Japanese home and a sparse wooden dock, but barely anything else. Upon inspection, Will Guisse, whose profile is empty, owns it. There isn’t even furniture in the house. The parcel is large, and I wonder who would pay that kind of tier for a piece of land that is never used. Then it hit me, and I flew up until I found a skybox about 300 meters in the air.

The only other sizeable property on the land is the Fate Garden, a web of tree house-like structures that house a 7 Seas fishing area. It’s a pretty place, but otherwise unremarkable.

Who Lives Here? The Story of the FairChangs 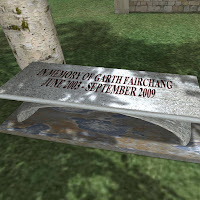 The story of the FairChangs has everything: Love, history, tragedy, and staying power.  Pituca Chang and Garth Fairlight met in 2003 in  Second Life™, and quickly became a couple. They built a real estate and freebie empire together, married in Second Life™, and despite great geographic odds married in First Life. In fact, according to Pie Psaltary (thanks for the help, Pie!), the Lindens actually changed their last names to Fairchang, combining their two names into one.

This story, not an uncommon on in SL, has unfortunately a sad ending, in that Garth died of pancreatic cancer in September of 2009, leaving behind a mourning Pituca, and many other people whose lives he had touched. You can go to Taber and visit the memorial to Garth, which still stands. It is on a piece of land that holds some very old objects. The Tudor houses are from 2004, and were built by Jai Nomad. Residents from my era will remember the freebie Jai medieval textures, that I still use to this day, because they are that good. The memorial park also holds a windmill that was constructed by Garth himself. Two stone benches  are provided so that you can sit and meditate on love, Second Life™, and the meaning of life.

Of course, one can’t dwell in sadness forever, and free goodies are always an antidote for the realities of our daily existence. Close to the Taber memorial benches is a sign that provides a teleport to a whole area of free items provided by the FairChangs. Garth was still alive when he and Pituca decided to make all of their previously sold items free.  If you touch the sign in the memorial area, you can teleport to the sim of Calypso, enter the lighthouse and help yourself to many freebies. I suppose there have been no new creations in several years, but there are still items that bring a nostalgic joy, and are worth collecting, including houses and vehicles. I used their fly and return crows and bats on most of my builds over the years, because they add sound and interest. 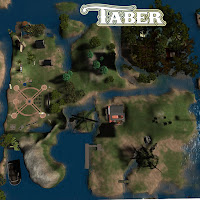 Taber is worth a visit. It holds some of the oldest objects in Second Life™, and certainly its oldest love story.