The best laid plans of mice and men...., I am happy to report, this is NOT the story I had planned to write. Having recently told of how one might take adventure journeys of discovery, traveling the mainlands, via connected sims, I had become adept at using the World map to find and TP to new areas of adventure. By zooming out and panning on the map, I was able to find and go anywhere in SL, without first reading about it in the destination guide. I knew, from past experience, of sim collectives which were connected in such a way that allowed travel to a dozen sims without need of a TP. Twelve sims might sound like a big area, but in real life is only just under one third of a square mile. That's about the size of my free range when I was in grade school. By comparison, larger SL continents contain as many square miles as a city the size of Chicago. I lived in Chicago, for a number of years, and, even with high speed transportation, only explored a small portion of it.

In my report on intercontinental travel, I had suggested the need of locating sims that allowed rezzing new vehicles, so the journey could be made in stages. As a follow up to the article, I was using the world map to locate and TP to random points on the continents, to see if there were places I could rez a ship. On one such venture, I was panning the map and spotted a large area of land, smaller than a continent, but big enough to see from outer space. Zooming in, I discovered this "island" was made up of 59 connected sims. The northern 18 sims are called Winterfell and the southern 41 are "the Independent State of Caledon". I had heard the name Caledon before, but had never been there and had no idea of how big it was or how well known. Now, I am amazed that the name is not as well known as Disneyland. I figured, if after three and a half years in SL, this place was "news" to me, it needed to be researched and reported to others. 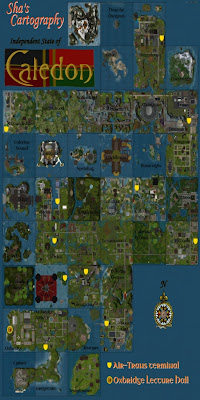 The first thing I learned was that Caledon was dedicated to 19th century, "Steampunk" life. Knowing that this was a popular theme among many of my friends, I decided to map, explore and report on Caledon. I began with making a detailed map, so that I could mark points of interest on it. Using the world map, I cut and pasted each of the individual sims into one large map. This map has a resolution of one square meter per pixel. The image ended up being 1570x2340 pixels, which is way larger than SL allows to upload (1048x1048 max). To upload it to SL, I had to make a scaled down copy at 703x1048, which is still very detailed. Now, map in hand, I proceeded to explore all the sims of the State of Caledon. I am going to give highlights of what I found, but for two reasons, will not go into much detail. First, I discovered there is a lot written about Caledon and it's individual sims, which can be found on the internet and discovering all this is what makes the exploration fun. Second, given all that has already been written, I needed another reason for writing about it. After all, I am writing an article about exploring new things, not compiling a book of existing reports. We'll get to the reason I decided to write this article, after some highlights of Caledon. Be patient.

Caledon began as a single sim, about seven years ago, on the mainland. Within only a couple years, it had moved off shore and grown to nearly two million square meters. It's theme is 19th century. Period attire and language is not required, though greatly welcomed. You can travel the nation on public horse and carriage, tramway, train or air transport routes, or bring your own Victorian era vehicle. In most of Caledon, you can fly and rez things. Most places had no automatic return of your things and those that do allow an hour, so you can park your vehicle and stretch your legs or shop. Remember to remove anything you rez and if you crash, go back and fetch anything left behind. Nobody likes a litterer. Caledon is part of a larger, 4.26 million square meter area, devoted to steampunk, known as "The Realm of the Roses." If steam is your thing, you might like to make your home there, but there is a waiting list. You'll find the residents are intelligent, creative, friendly and helpful. There are a dozen info hubs, scattered about the state.

Oxbridge University is a great place to start. Following the red arrows, on the ground, one finds signboards that explain SL basics, which are helpful to noobies and seasoned users. They also have scheduled classes, in the lecture hall, where you can learn about building, animation, RP, clothing design, mesh, sculpting, photography, and things to do in Caledon. Near by, in the Hall of Caledon, you can learn about things found in the State, it's history, etc.

Victoria City is the capital of Caledon. It's streets are laid out in geometric patterns and walking about is like a park with many sculptures. There are many shops for period clothing, furniture, gadgets and vehicles, with a fair amount of freebies. There is also a large public library, with multiple language resources.

Caledon and Caledon II, centrally located, are the first two sims, around which the micro-nation formed. Having mentioned the founding sims, I will now begin to end this report. We have only seen the tip of the iceberg here, as you could easily write a whole book on Caledon. It has only been less than two weeks since I discovered this place. I think it would take months, maybe years, to see and learn from all that is there. It is themed as being 19th century, but they are not fanatical about it. At one sim, I saw phone booths. I also passed one location that appeared to sell dirt bikes. As amazing as Caledon is, it is difficult to understand why it took three and a half years for me to learn about it. Talk about your "best kept secrets"......

Now, in closing, let me explain why, with all that has already been written about it, what my greatest delight is about discovering this place. I have spent much of my real life developing a new technology, called Pneumatic Crystal Lattice (PXL), a means of constructing ultra-light rigid structures from which floating and flying cities could be built. My teacher/guru predicted that one day this technology would be used to build "cities of light," that would inspire the planet and usher in a new, golden age. I recently asked the members of our class, "The Keys of Knowledge",  given this technology, could they come up with a covenant by which a group of individuals could become an inspiration to the whole world. Centuries ago, 13 North American colonies gathered together and became an inspiration to a planet. None of my RL classmates could offer any suggestions as to how today's humans could create an inspirational nation. Now, in a virtual world, called Second Life, I have found a group of people that seem to have found the answer. They may call themselves "old fashioned," but, in this writers opinion, they are as new age as I have yet seen.