Are you into role play? Have you ever tried it? I have met people who say “oh no, I would not like that !!" and when they try fall in love with it! Though I have been visiting Tombstone, Arizona as a traveler and like it very much, I was interested to see the birth of a new role play region called Salt Lake City. I joined the group as a traveler so I could see how it evolves. 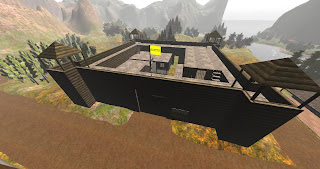 The history period is the 1860's,  a most interesting time in the western USA. It is  in one sim so far and is collecting members who want to be in certain roles or just live there as citizens. The owners hired a custom builder to be sure it would be authentic. The grand opening was August 10 though the building continues. There is a Cavalry already with an imposing fort. One of the first places to be opened was the orphanage with a nun to take care of the poor orphans. There will be a native camp, forest and mountains already surround the town. Of course, there is a saloon complete with poker and other games, and the bar is open for business. 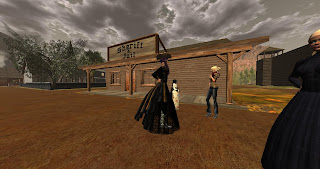 Over the past few days it has been a busy time for the owners who seem to be deluged with questions and IMs just to talk. The hotel is open for daily rentals as well as some small homes in the town , furnished and unfurnished. There are strict rules in the roleplay with fines or jail time for breaking them. I saw some big guns there so I think there will be serious outlaw arrival. The sheriff is working and has a female deputy,  so that will be interesting. The country church is ready for weddings and services. Roles still open at this time Judge, Blacksmith, General Store Owner, Saloon Owners. People who role play in other places are invited to join the group or anyone interested in becoming involved in role play for the first time. There will be mentors and classes to help them orient to that historical period in the old west. 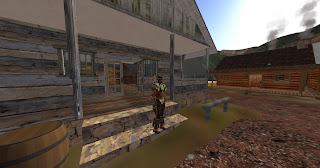 I believe there is already a war between the Native tribe and the newcomers. Good thing the Cavalry is already there. The Navajo Nation is setting up camp in the mountains, well hidden from the town, though I encountered several in town when no one was around. That may be why the 15th US Cavalry is doing heavy recruiting.
The banking business is getting ready and I am sure will be robbed first thing. There is an extensive shopping area at the arrival location with clothing and arms to outfit you for your life in Salt Lake City.  Co-owner, Zaclegend Usher sent this notice the other day, “Well its that time again where students are gearing up to go to school again and we are starting our brand new course here in Salt Lake! Introductions To Roleplay! We have mentors which are here to help you and we strongly advise our newcomers to stop on by! Feel free to stop on by and get back to school.” I also met one of the co-owners, Keneu Karu, who is enthusiastic about the new city and has experience with role play. If you are interested you can travel to the entrance and take a look around . Meet some of the citizens http://maps.secondlife.com/secondlife/Passion%20Bay/132/138/1003  .

Addition: Contacts for the roleplay are Zaclegend Usher, Tessa Danube, and Kenau Karu.