The Cornfield: An Old Region Renewed 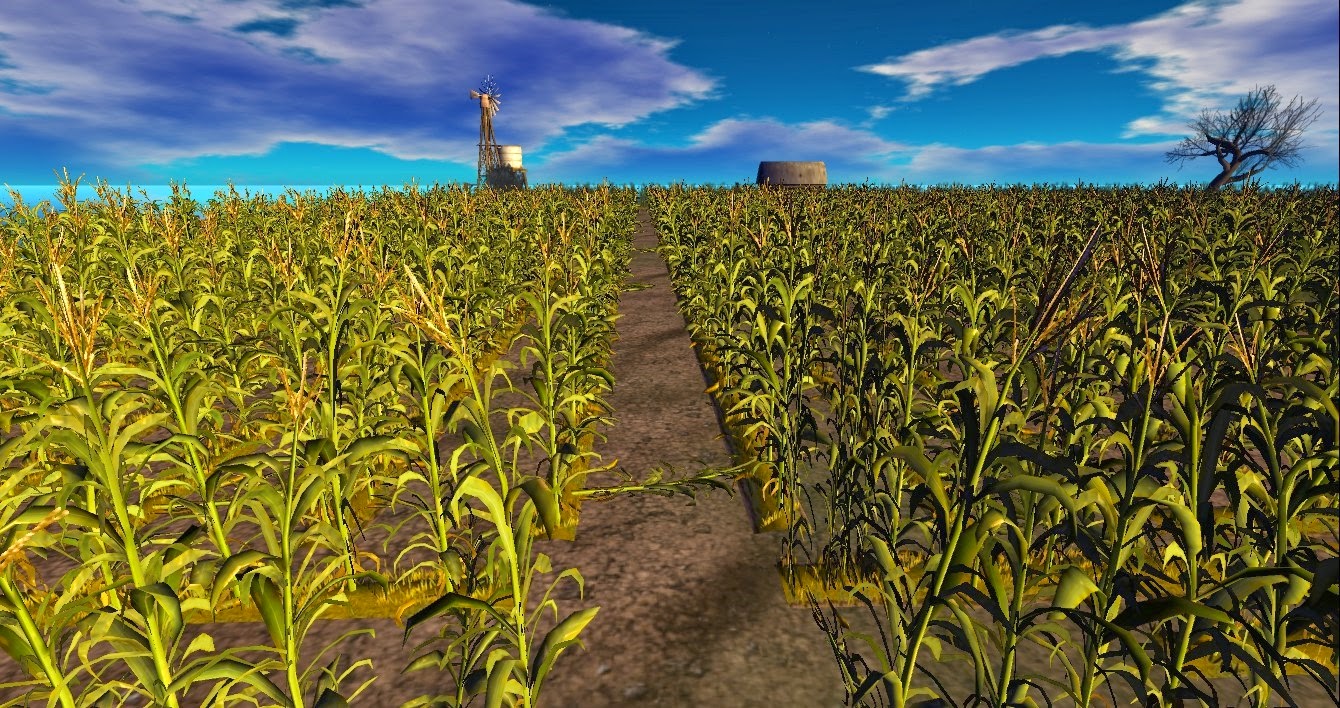 The Cornfield was pretty much a mystery to me until last year when the Lindens brought it out and placed it at the SL10B . Then I learned the legend. It was a place where griefers and other naughty persons were sent in the early days of second life to consider their transgressions. If reformed they came back to the normal sims. Well, The Cornfield is back but in a new resurrection. I went to see it.

In order to get there, I went to the Linden Realms Portal entrance where you can access several interesting places, The grid hunt, the Linden Realms, the Wilderness,  and The Cornfield,  and some hang out areas. I entered the walkway  leading to a large old barn, passed through it, was TP’d  and arrived in a similar  barn where I was handed a basket to wear on my back and a plank to carry as a weapon along with a hud. I picked up rules for the game. The barn was filled  with people coming to empty their baskets into the bins. 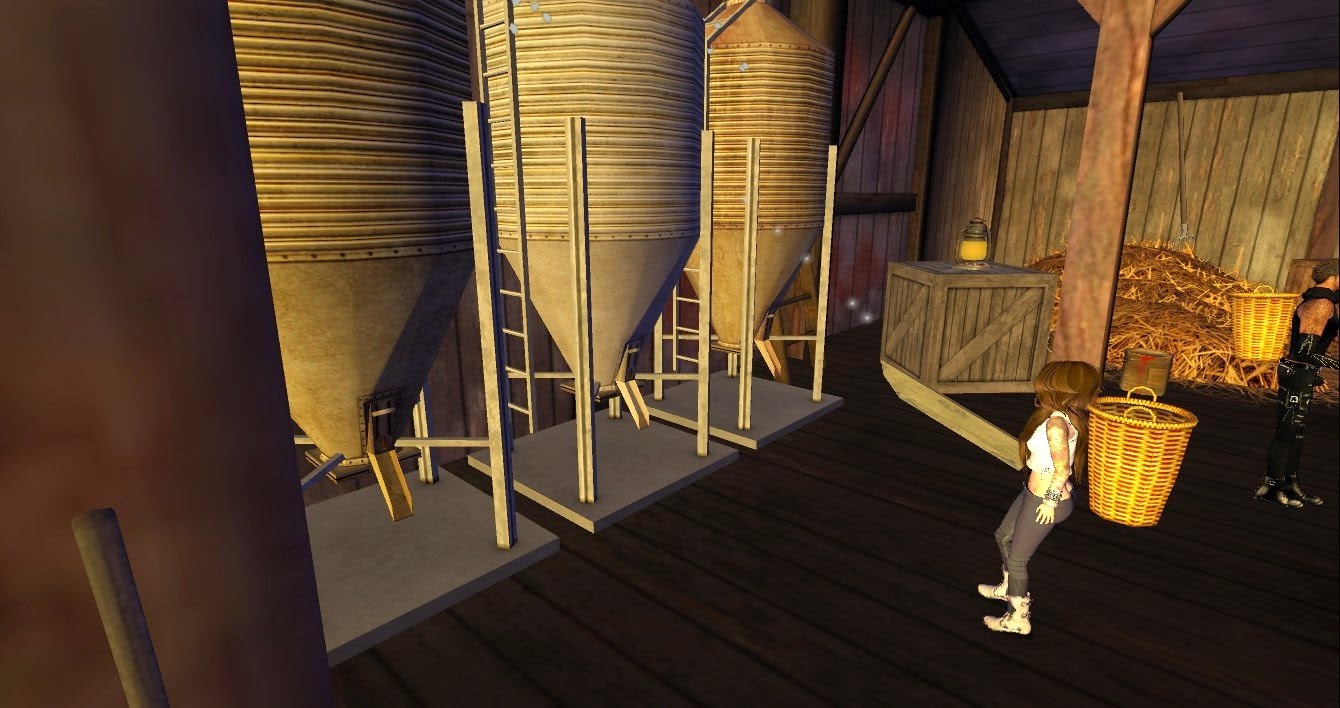 This is a very busy game so be prepared to run like the wind, watching all around you for horrible creatures (griefers) of all sizes and shapes that are intent on catching you. They sneak up on you from all sides! Some look like dead pumpkins, others like cornfield zombies, some like wild scarlet eyed half animal half beast. While you are busily looking for corn cobs and coins, and other treasures in the field they are on your tail. If you are caught you end up in a graveyard and lose all the corn you have collected in  your basket. Then you start over again with the collection of cobs, luckily your coins do not disappear.

The cobs are converted to coins when you empty them in the bins. The coins can be spent in the company store for various prizes. They can also buy you some armor and other tools that help you fend off  or kill the griefers in the field and gain coins they leave behind as they perish. One problem is that as you kill one griefer another kills you so you miss getting some of the coins. I am not much at killing zombies in SL but these guys deserve it!  I learned to use the buildings in the field to remember where I was and try get back there before someone else grabs them. 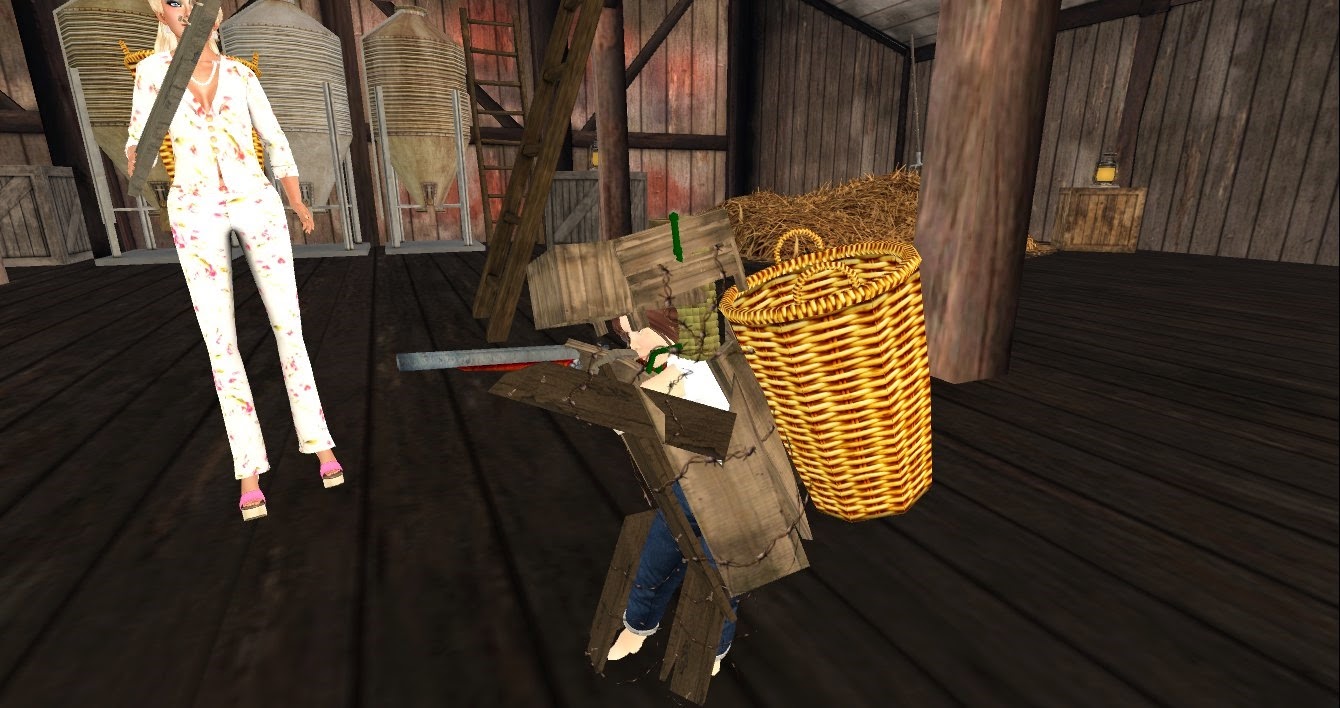 The hud appears and disappears when you enter and leave the region. To reach the barn you need to start in the Portal, follow the path to the cornfield barn  and go through the rear door there to be tp’d into the Cornfield barn. I met some friends there on my second day.Marianne Mccann is a fan and has been playing for a while. She informed me that there are other hidden treasures in the fields besides the corn and griefers. Using the plank to kick the griefers is not easy! I already have my armor but now to earn enough for a better weapon than a plank!  Hates to leave you with that little info but you will learn by playing! See you there !