It was a few days ago when Bay Sweetwater announced that the Phaze Demesnes sim would soon be closing down. Wondering what the place was like, especially as some of the goods it offered were now for free, I headed over to see what I could find. 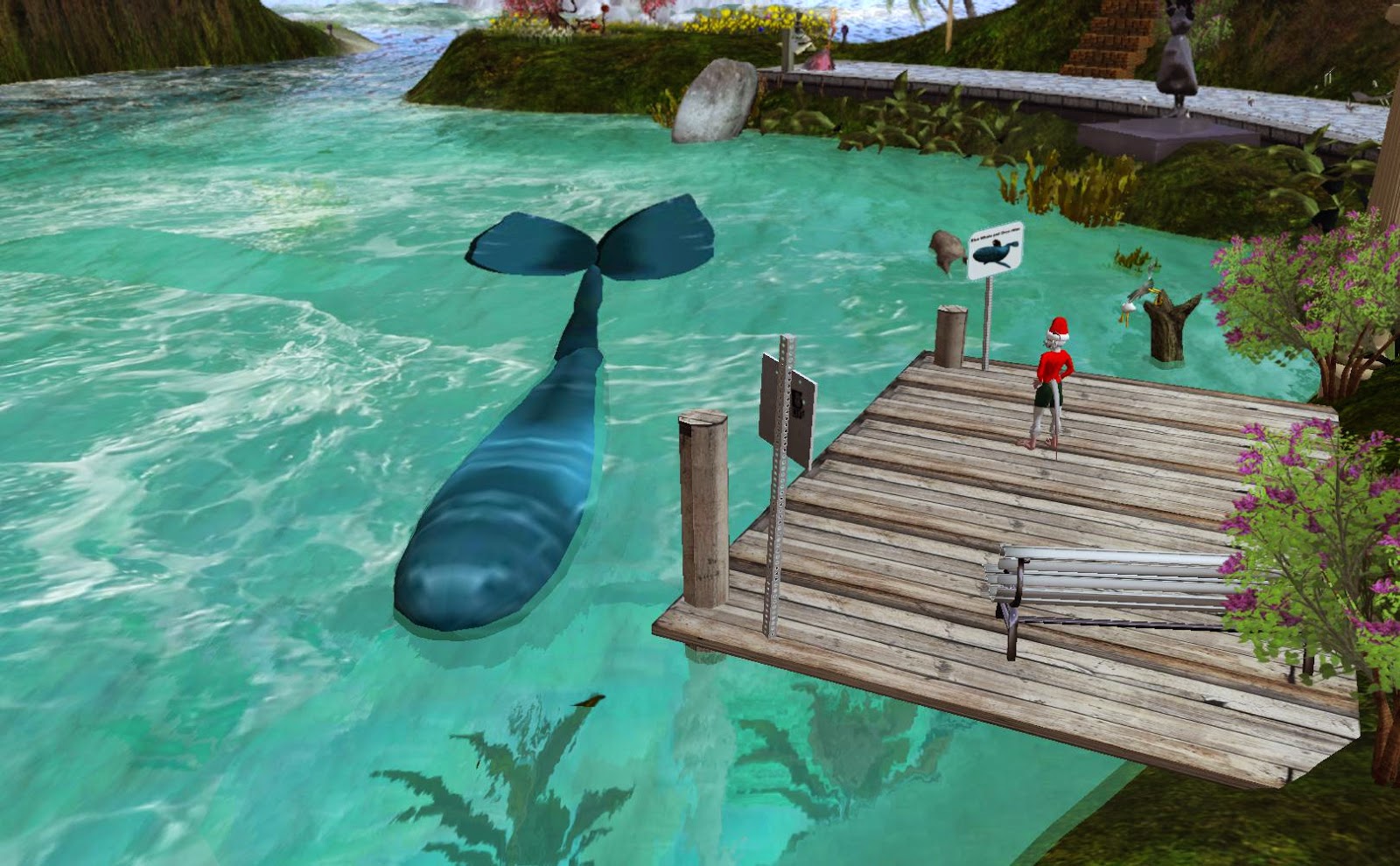 Although the provided landmark for Phaze Demesnes (217/207/23) was for the northeast, I ended up in the middle of the sim instead, which was a better starting point in retrospect. I was handed a notecard with several locations. The next thing I noticed was a group of pigeons that would take off when I approached, then landed back down. Right next to me was a dock where a whale would occasionally stop and wait for a passenger. Getting on, I was taken for a ride through the river. Most of the trip was underwater, so in real life such a trip would have meant holding one's breath for a while. I didn't have my view focused on my avatar when the critter took off, so I ended up going into first-person mode, which showed quite a ride. 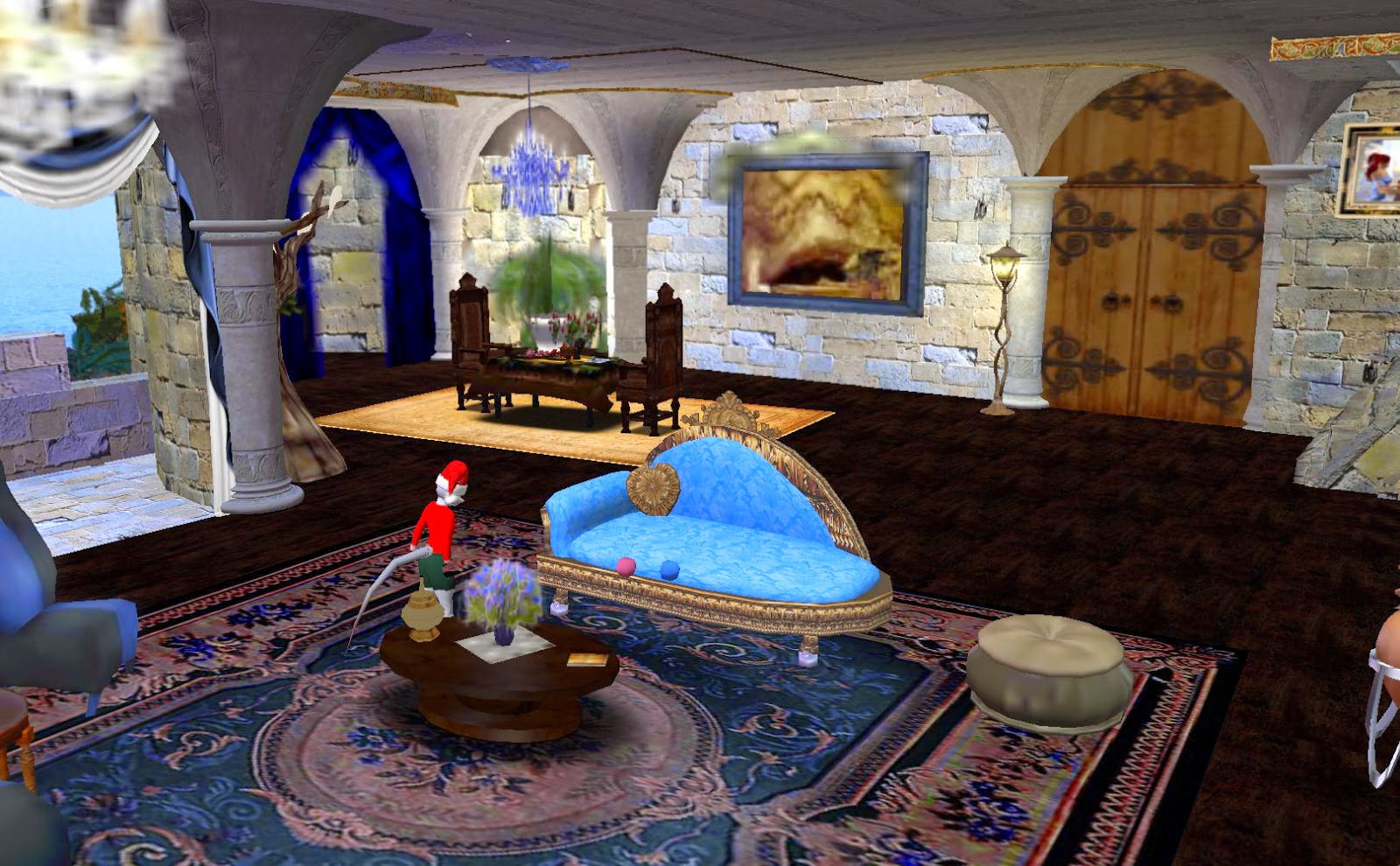 Not far away to the northeast was the castle, described in the notecard as "the home of the Blue Adept and the Lady Blue." Outside it looked well done. On the inside, it looked quite exquisite, with many decorations and furnishings around. In the center of the place was a cuddle couch. There was also a freebie painting there (if there were others, I missed them). Further in was a wedding chapel, as well as a dungeon, though I never did venture down to see them. I never did see the free teddy bears described in the notecard. 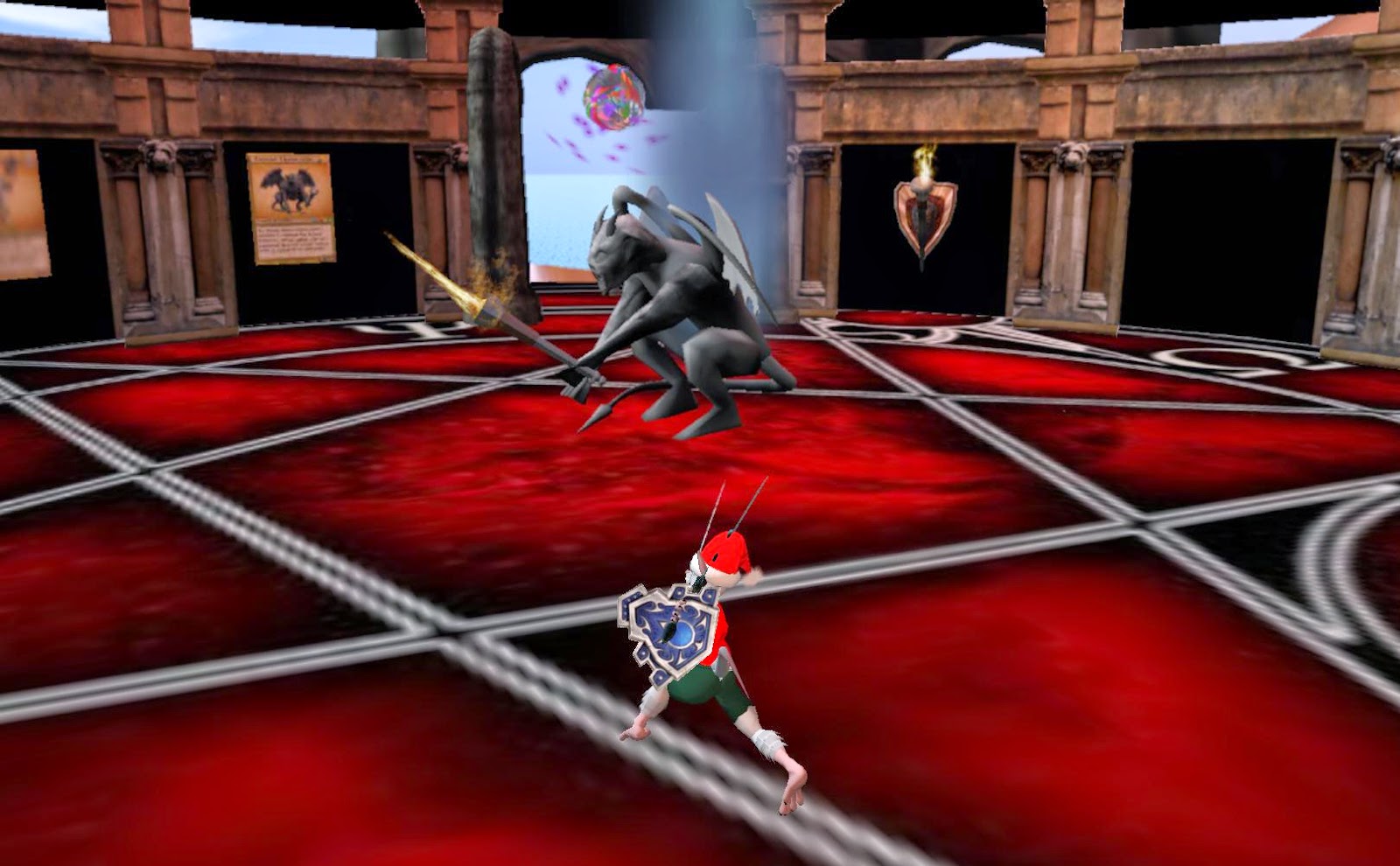 Leaving the castle and walking on to Dragons Isle, I never did find the freebie dragons described in the notecard. What I did find was a few figures, including a stone fighter, an ogre-like being, and something demonic, around a portal entrance. This led to an area with a red floor with a pentagram etched in. One is invited to pick up a sword and shield, either green or blue. Whether or not you do, demons soon appear, with one set up numbers representing your health, and another for theirs. They head to you, and every time you whack them, their health goes down while the number for your health drops when they touch you. When theirs reaches zero, they vanish and after the last one disappears another round with more monsters begins. If yours reaches zero, the game ends. I didn't do too badly when I fought one at a time. But soon they were coming at me two at a time, so I tried to keep away from one while fighting the other. Three at a time, and it was soon game over. Maybe they didn't like losing to a mouse avatar dressed up in Christmas red and green (grin). 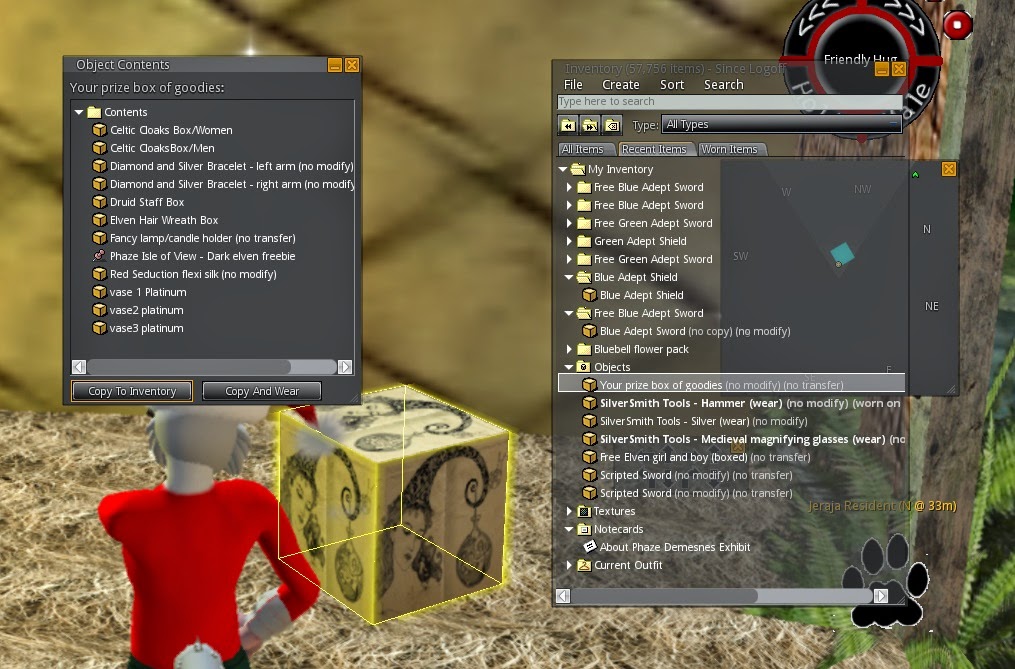 The notecard described a "silversmith game" underneath the castle, so I used the landmark provided, and arrived at a smithing area, with an anvil and tools along with a few silver objects on the counter. It turned out this was a puzzle, and one had to click on things and do a few actions in a certain order. The reward was a box of goodies that contained vases, bracelets, cloaks and a silk, and other items. 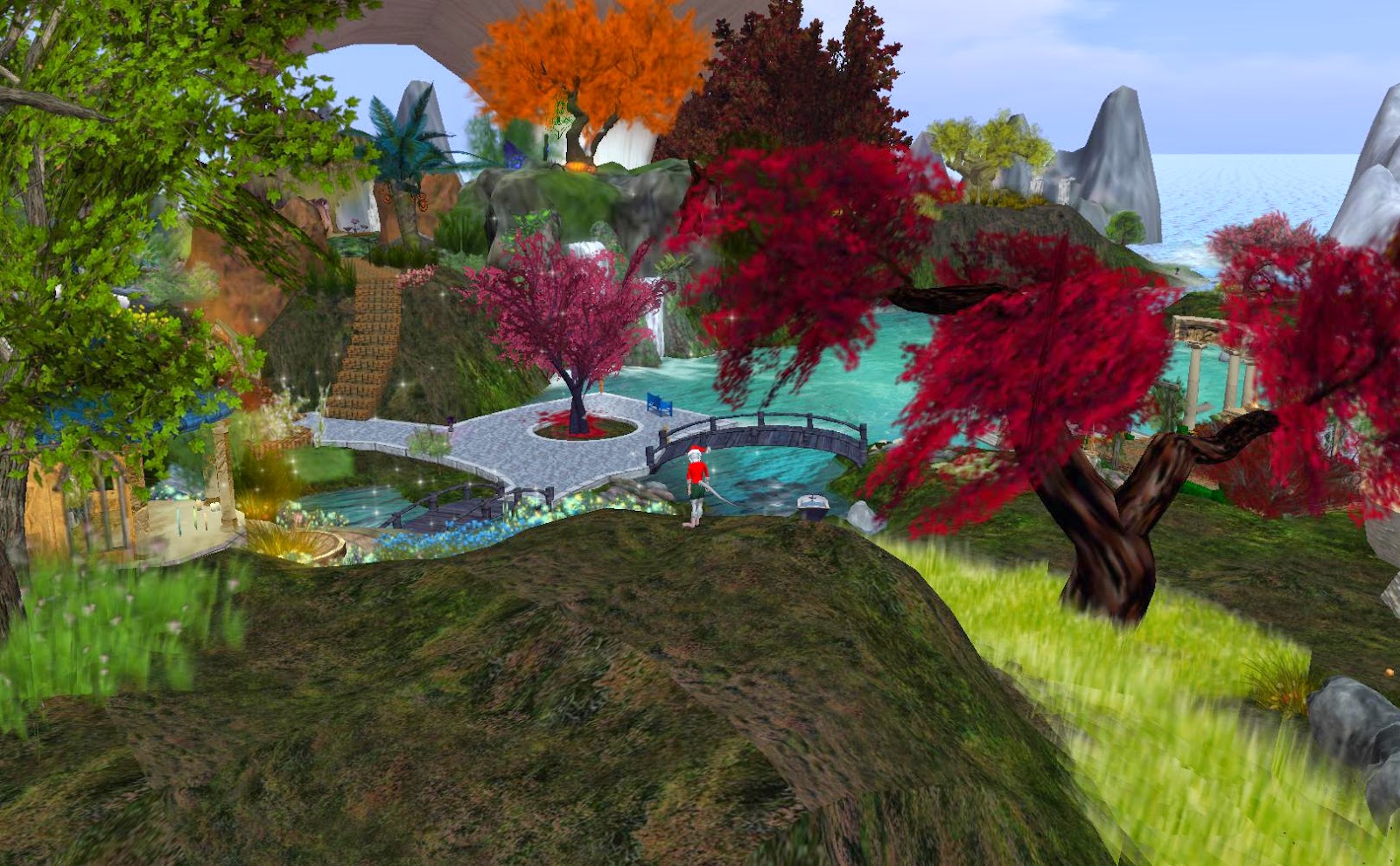 Other places included the Proton Dome, "a science world full of unique free items," where the notecard stated one could pick up a free translator and "free birds that perch on your arm, fly with you, and live in your homes and gardens." There was also a fairy area described with a magic potion game and a unicorn ride. Another area had free equine mounts, as well as free coats.

The sim was created by Ferd Frederix (Fred Beckhusen) and Wavingirlsav Voom (Debbie Edwards). For those who wish to keep up with their work, they will be soon opening their own place in Opensim. They also have a blog at http://www.outworldz.com/secondlife/ (caution, some nudity and language).

If you're reading this article while new, once again, you can get there by clicking the SURL (here).