In December 2009, the much anticipated sci-fi movie "Avatar" by James Cameron reached the theaters, and was a blockbuster hit, drawing huge numbers. People marveled at the groundbreaking special effects used to create the alien "Na'vi" in the film, as well as the planet's beautiful appearance. In Second Life, it was frequently talked about, the tie-in with the name "Avatar" being obvious. Avatars of the aliens were soon made, and before long, roleplay areas. 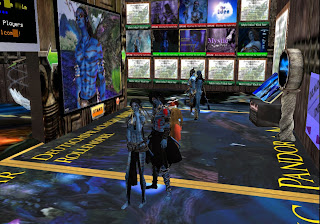 James Cameron’s science-fiction movie “Avatar” has taken cinema by storm, setting box office records in the United States and elsewhere across the world. Inevitably, people began making avatars of the alien “Na’vi.” Whenever there’s something big in science-fiction, people are drawn to begin with to recreate it here. With “Avatar,” there was a certain irony to it. There’s the movie’s name, making the “Na’vi” in Second Life “Avatar” avatars. And just like the humans in the movie create “avatars” to go about in an alien world in an imersive and personal manner, people have been doing so with “Na’vi” avatars here in the Metaverse. And of course Second Life avatars tend to be much taller than normal human anyway.

Many of us have already seen the familiar blue, thin humanoids showing up at clubs or other places. As it turns out, there have been efforts at more, trying to recreate the world of Pandora in Second Life. 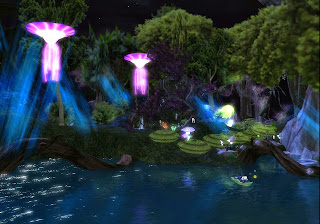 Probably the most detailed of these Pandora areas is the Pandora Magic sim in Second Life. The entry area has a few freebies nearby, notably the rp combat system. Portals can take you to shops, or straight down to the planet. And given a little time to load, it is a most beautiful sight. Trees standing tall in the air, luminous plants and creatures providing colorful light - notably when seen at nighttime, flowers that make “crunch” noises and temporarily vanish when you walk near.

And of course there were a few Na’vi avatars about, walking here and there. There was also a couple embracing in a leaf boat moving slowly along a river. There were other cuddle poses throughout the sim, for any couples going here for a stroll in the woods. Supposedly some people after seeing the movie are depressed about not being able to visit Pandora for real (Click Here for CNN article). Logging into Second Life and going to Pandora Magic would certainly be one way to ease these down feelings. 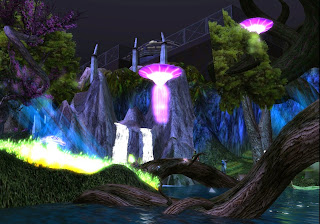 Pandora Magic and its sister sim Pandora Hellsgate are the location for a German Na’vi roleplay group, though they don’t seem to have a problem with visitors going about the forest. The language at the starting area was German, though some notecards had English translations. Most of the chat heard was not in English, but there was one who did, commenting, “I think the reason Second Life has gone AVATAR crazy is because the movie related to us in a big way. A lot of us log in to a new body and a new world with unimaginable possibilities. SL is the outdated version. (laughter).”

Going into Search and typing Na’vi or Pandora, one will find other sims. Checking some of them, none led to a forest as lush as Pandora Magic’s, but there were some other roleplay groups. Angels Sanctuary had a Na’vi forest, which while not as detailed as Pandora Magic was better than most other "Avatar" places I saw. Two places had the same design space station, with a free human Hardsuit and 1L hovercraft, though except for demos the Na'vi avatars were a little costly. And some areas, while a nice place to stroll, seemed to have nothing to do with the “Avatar” movie, or were just a place to sell expensive avatars and props.

So if you’re someone who’s seen the movie and wants to relive it, or just want to see a little of what all the hype is about, Second Life offers places and things for you.

Eventually, the movie was dropped from the theaters, and the chatter among the bulk of Second Life residents faded. But for the roleplayers the movie continued to hold their interest. Checking the map a couple years later, the Pandora Magic area was still around, and there were both buildings for the humans, and a group of Na'vi avatars going about. Five years later, the sim is gone. But a search of sims with the name "Pandora" revealed one with a familiar looking landscape with a huge tree. For some, five years after the movie came and went from the theaters, the movie still inspires them to recreate the scenery here.