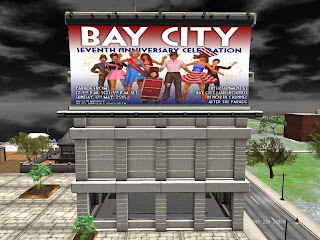 Bay City. I cannot believe it is seven years since Bay City appeared on the map. I remember visiting the newly formed lands that were almost empty at the time. My early recollections are of an open area with tree lined paths a large pond with plants around. I recall empty marked roads waiting for traffic and well ordered canals with bridges connecting the areas. I am sure I took a ride on a boat along the canals and also a ride on a trolley car that gave me an overview of the lands. I think I passed an industrial area along the ride. It is hard to remember much more. One thing I do  delight in, I learned to bowl there in Bay City. It was great fun. I wish I could access the article I did at the time for the SL Newspaper, but it is lost in the mist of the internet somewhere. It was in my early days so everything new was a great adventure . 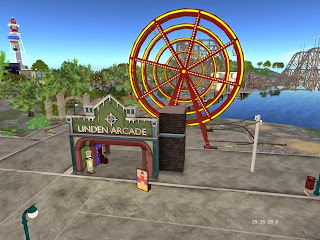 The Bay city of today is so different from back then. It is a vibrant community holding events that are lots of fun and inviting everyone to attend. The Fairgrounds in the North Channel  is the place for great vintage car expo, flea markets,  parties for the Moles of Second Life every year. Citizens are very fond of the Moles who built the regions . There is a party to chose the Miss Bay City every year and so much more. Actually you can read all about the history of the area in the second life wiki . http://wiki.secondlife.com/wiki/Bay_City 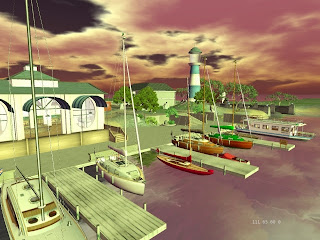 I went over to look around again before their 7th anniversary next weekend and reminisce on the early days and the massive changes that have taken place. I stopped off at the community center but it was early and no one was there yet. If you visit there you can pick up their flag, a tee shirt, see some artifacts of the past and events and read abut the history on placards set up by Marianne McCann, a prominent citizen. On the wall there is an excellent map of Bay City as it is today. Click and you will get a list of the  landmarks.  I stopped over at the Harbor which is a vibrant area full of boats.There is an infohub at Moose beach where I made a visit. I took a look at the Hau Koda airport and the Cafe Deco. The Amusement Park is a fun place to visit as is the Bayou Theater. I missed the canal trolley sorry to say, but will go try to catch it when I can.  I was able to catch the other trolley for a ride along the roads . 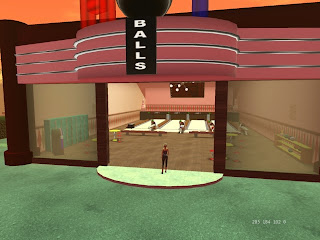 At the end of the line I found my bowling alley in Handa. This was the point of my first visit those many years ago. It was a great thrill! Ah, the olden days...  I am so looking forward to the parade along route 66 on Sunday May 17 at 12:30 PM SL time ! It will be a great time!
Hope to see  you there in Bay City! http://slnewser.blogspot.com/2015/05/press-release-bay-city-celebrates-its.html
Gemma Cleanslate
Posted by Bixyl Shuftan at 6:00 AM