At Cape Suzette in the Sunweaver region is a small but growing beach club, Angels Beach. 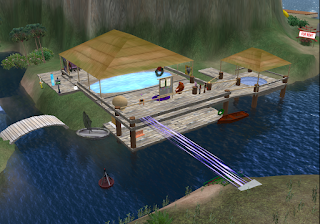 The club had some small beginnings, starting off as just big enough for several patrons. “We opened in April, and we have expanded three times,” club owner Nydia Tungsten explained. She credited Kim7 Avril for the idea, “she helped me when I was down and helped me create Nydia's Angels (Nydia’s group). About the same time we were working on the club and it just fell into place.” Nydia credits Treminari Huet with building the club, “this club is her design.” Treminari has been happy with the club’s progress, “I’m glad to see Nydia doing something successful with it. :) “ 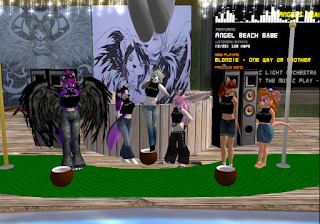 Of the club’s small and cozy beginnings, Nydia commented, “I like to still think of it that way, compared to the size of most clubs. Angels Beach is a good size. No wasted space to get lost in. No fancy ‘themes’ like space or playing cowboy and Indians or pirates. What we wanted was someplace to come and be themselves and relax just hang out and maybe even meet someone special, kinda like I did at Zero. ... We made the club a beach club because, people go to the beach to have fun. And that is my number one goal, to help people have a good time.” 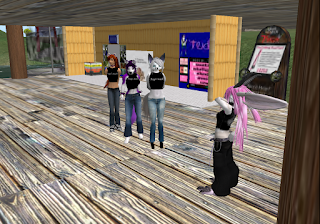 Nydia herself is an experienced DJ in Second (Life, having played at a number of other clubs, including (but far from limited to) Club Zero Gravity, Xanadu, and Cutlass, “We will be playing what people want to hear music-wise. Our DJ's will be taking requests from all genres, except crap ... I mean rap ... wait, I had it right the first time.“ She also has other DJs on her team. There is Lsai Aeon, coined the “Purple Puppy” by her fans, noted for her Saturday night  antics when DJing. And there is whom Nydia calls her lead DJ, “the mistress of the tunes if you will,” Alexandra Tymets, “I was impressed with her wide selection and general knowledge of music.” 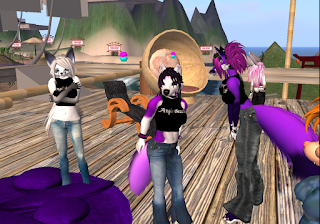 Alexandra, or “Sexy Lexi” as she’s sometimes called, plays a variety of music, “I can do 80s, Trance/Techno, and Eurometal. A little bit of Angry Grrrl Rock too, Pink, Liz Phair, etc. And, umm, of course a selection of silliness. Technically I could even do Classic Rock if it came down to it. I have a little Corsi and Bob Rivers, and of course a ton of Weird Al. Oh and some Lemon Demon and Mc Chris. And if I don't have it, I have a talent for finding it.” During the conversation, Lexi’s neko mousegirl avie, or “Nezumi” as she calls it, had her ears rubbed a few times by a friend, resulting in a surprised squeaky expression, “They keep me around to DJ and make me squeak.” Her friend grinned, “She's our little squeaker toy.” 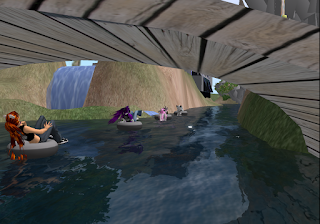 Scheduled parties are not the only time people gather at Angels Beach. Sometimes a few friends show up just to hang out, or dance to whatever the stream is playing. With the recent expansion, there are cuddle chairs available for couples, plus a fun inner tube ride on the new underdeck underneath the main deck that allows the swimmer to take a leisurely drift on the river around some of the surrounding land, and back to the club. Just be careful of that patch of green ...

Although the club’s general theme is always a beach one, there are themed parties. One was a Wild West party in which most of the people showed up as not cowboys, outlaws, or Indians, but the horses. “Had plenty of horsepower that night,” Nydia joked. Nydia felt the party with the largest turnout was the “Hi-tech Redneck.” The winner, “I think she went for a cyborg rancher. It was pretty inventive ... had a neon coyote, a mech dog, robo horse, had a few good ones.” 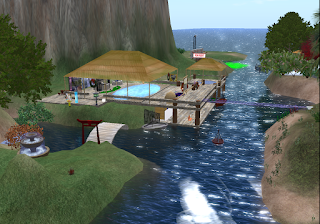 Nydia reminded that although the majority of the club’s patrons are furs, all are welcome. There are some normal human avatars in her club group, “Human, neko, merfolk, who ever or what ever you are in Second Life, you will be welcomed. I will be looking for water scenery for the merfolk.” She is also looking for a “mermaid” dance animator for the club. Nydia mentioned one in her staff, Jian Alcot, lives in Europe, and plans to run events at times more convenient to Europeans when more join the group, “if she can get enough from across the pond we will start having Euro-parties as well.” 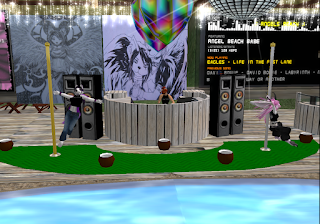 With Club Zero having to close it’s doors, Nydia made the decision to expand the club’s schedule to fill the hours the space club once held, “I have talked with Ranchan and she and I think Angels beach would do well as the Zero's replacement, so she is supporting me with this by allowing me to send notices in the Zero's groups and she will spend some time here as well as I hope DJ'ing every now and then.” There will be parties every Tuesday and Thursday from 6 to *8 PM Second Life time, and 8 to 10 PM on Saturday nights. For fans of Lsai Aeon, Nydia says she will be taking her act from Club Zero to Angels. 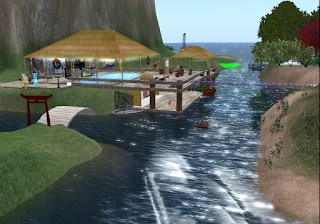 Tonight is the night, Angels beach is BACK, and DJ sexy Lexi will be taking requests with 1000L's on the board, Angels and Demons is the event, so wich ever side you fall on come and say Hi and dance the night away, meet old friends or make a few new ones this is the place to come and relax and Have a good time, Try the Innertube ride, find our cuddle cave, or just enjoy the music Come and Enjoy the the newest Sunweaver club

On Saturday night on December 5, the club held it’s Grand-Reopening party at 8 PM SL time, to celebrate it’s expansion in size and hours. The theme was “Angels & Demons,” with everyone described as enjoying heavenly-looking dancers and having a devil of a time. It was a well-attended bash, with close to two dozen people were at Angels’ beach. There was a contest with a 2000L prize for the winner for best in theme. The result was a tie by Vania Arashi and Alpine Plessis. 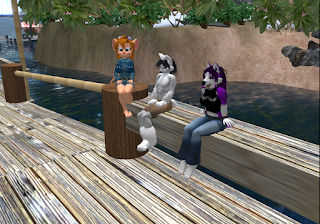 The location of the club is at  Cape Suzette (74/ 34/ 24), and has a small website and schedule here - http://sites.google.com/site/angelsbeachclub/schedule-1 .

So for a great day at the beach to play or unwind, and a great place to party at night, come to Angels Beach.

“A little piece of Heaven on the sandy shore.” 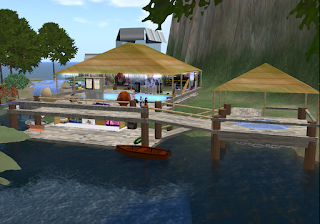 This is one of the first articles that I wrote about the Angels/Sunweaver region. It appeared in Second Life Newspaper in December 2009. Less than a year later, the club would be gone when the sim vanished, but it would be an inspiration for the "Happy Vixen" club which appeared at Purfection later. Most of the people mentioned here would also move on as time went on, though the Sunweavers/Angels remember them as part of the history of the community.