I recently went to the recently opened Vietnam Veterans Memorial’s virtual counterpart here in Second Life. Besides viewing the very well detailed replica of “The Wall,” I met up with one of the men behind it, Evian Argus. I gave him an interview, and he took me on a tour of the sim. 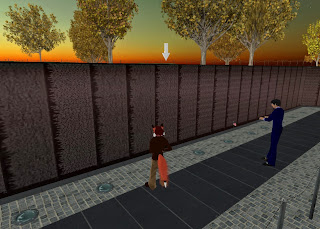 Evian Argus (Robert Eagan in real life) is the President of Meme Science (http://www.memescience.com/), which built the sim in honor of the Veterans who gave their lives, “we endeavored to communicate the history and existence of this significant memorial to current and future generations in an innovative and relevant manner,”  and for people interested in visiting whom are unable to visit the real memorial. Planning, designing, and building the sim took about two months, done by Bleys Chevaller (Don Cramer in real life). He spent several Fhours at the D.C. Vietnam Memorial, taking over 300 photographs of The Wall and statues. He then spent about a week studying the photographs. Work on the Three Soldiers Statue and the Vietnam Veterans Womens Memorial Statue was done by Meleni Fairymeadow. The sim was and will continue to be funded by the Vietnam Veterans Memorial Fund. 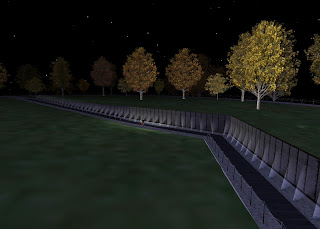 The virtual memorial was opened to the public in Second Life on November 7, coordinated with the 25th Anniversary ceremonies in Washington D.C. Between then and Veterans Day, about 1000 residents came over. And as I looked the place over, people continued to drop by to visit. Upon entry, one is greeted with a movie screen showing both images of the real wall and it’s replica here, along with audio of some of the names of the fallen.

The Three Soldiers Statue is “made up of mostly prim design w ith some sculptie objects,” with a total of 484 prims. Asked if there were any problems making it, “I had this sculpture made of all sculptir designing by another artist. It did not meet my design specifications, so I did not use it, ” So he paid the man and hired Meleni Fairymeadow, whose work with mostly prims he felt better captured “the true essence of the emotion of the individual soldiers.” Fairymeadow also worked on the The Vietnam Veterans Women’s Memorial, taking a total of about 70 hours and about 4 16 prims. 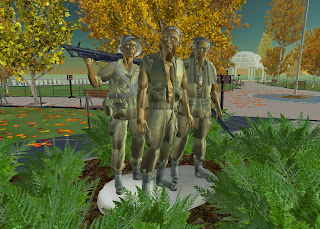 “The Wall” in Second Life contains 58,223 names instead of the 58,256 of the real one. Mr. Chevalier had found out 33 of the names had been placed by mistake, and there were three which had been added recently. So the correct number of names were listed. And from the avatar’s point of view on the walkway, like a person there in real life, one cannot help but be struck by the enormity of all those names on the large wall of black. The memorial’s names are faithfully detailed, and legible once fully rezzed. Besides the mouse, one can zoom in on them using control-0 and control-8. At night, lights in the walkway turn on and illuminate “The Wall.”

Finding an individual’s name was made simpler by the builders, “We have four directories. You can search for any name on the wall, and teleport to that name on the exact panel, and leave flowers or flags for that name, right from the Directory.” For testing, I had to pick a name at random from a list of names online, choosing Frank Blas. It took a few tries, but it worked after a couple false starts. Besides the option of teleporting to the name, one can also have the area briefly marked with a white arrow and walk down to it. Flags and flowers left will show who they are left for. 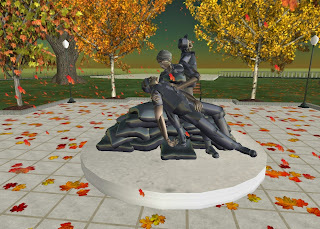 Every detail in the sim was finely done, the autumn leaves slowly falling in the breeze, the occasional squirrel chirping as it skitters about the grass. There was one detail the builders would like to have included, but were unable to. The real Wall’s black granite is polished to a mirror-like finish so when you look at the names of the dead and missing, you see your reflection among them. This could not be replicated using the existing building tools in Second Life. Chevalier hopes someday they will be improved to allow them to recreate the reflection experience. Still, “The Wall” can only be considered a faithfully detailed and well done tribute for our veterans in Vietnam. 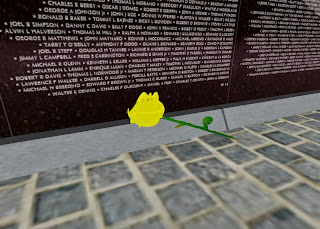 The builders of The Wall sim still have plans for further builds and improvements. Besides improving the name directories, they plan to increase the number of items one can leave at the wall, including photos and other custom textures. They also plan to add a new building that will host both real-life and Second Life material related to the memorial, such as video and weblinks. They also plan to add an image of the Washington Monument so it will look visible from the memorial as it does in real-life. For the website, they plan to add a search feature to find individual vets from there . One will also be able to view information about the vets from the database, and possibly add comments about them. One will also be able to leave items at the virtual memorial from the website, or schedule to have them left. Finally, as one can get a pencil rubbing of a name off the real wall, one will also be able to get a virtual rubbing from the web site.

On a final note, I was not able to start and finish this article in time for Veterans Day. But as Evian Argus noted, tributes to Veterans are not confined to then and Memorial Day.

“Thanks for coming, and your interest in the Wall.”

This was among the first articles I wrote for SL Newspaper, and still among my favorites. "The Wall" would be up for a few more years. Finally on Veterans Day 2011 when I looked on the map for it, it was no longer around.