When we began writing for SL Newser, in 2013, our first article was about the major continents, or mainlands, of Second Life. In that article, it was calculated that one could undertake the longest possible journey, without use of teleportation, by traveling from the Southern tip of Satori all the way to the Eastern end of Gaeta. Readers were challenged to attempt to verify this, by making the journey themselves. On the above map, this journey is shown by the red line. Seven months later, one of our alts, a dragon named Katzu made the journey, which covered 25 miles and took three days to complete. 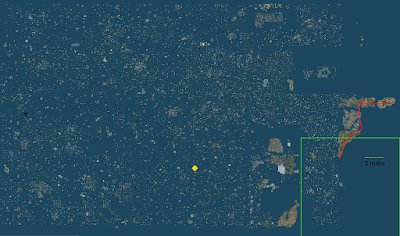 If you have been following my articles in the Newser, many of them are about adventures to places, scattered all around the virtual world, called "The Grid". As each article is being prepared, we open a "world map", which can be found in the viewer and at the secondlife.com website. From this map, we can pinpoint the location of the planned adventure, on the grid, and make local maps, to show greater details. The map, shown above, is a composite and shows the main part of the grid. There is more to the grid than shown here, but these fringe sims are, for the most part, used for premium account homes and land developments by LL. We have surveyed some "fringe" sims, but found little in the way of adventures to write about there. All of my articles for Newser took place at locations on the above world map. In preparation for new articles, I ask myself where have I not been and what have I not done. This time, I found myself asking, how big is the virtual world and how many people live in it. The search for the answers to those questions proved to be enlightening for me and I felt would also be of interest to readers of the Newser. An online search took me to a web page called, "Second Life Grid Survey". This page is updated every day and the world map is also adjusted daily. Let's have a look at what I found, on the Grid Survey, Christmas day.

The total number of residents is given as 44,357,627 Keep in mind that a large number of these could be alts or even bots, so that brings it down a bit. Fortunately, there are closer to 30-50 thousand online, at any given time. How much space do all these avatars have, to move about in?  The current number of sims is 24,909, with 13% of them rated for [G], 67% for [M] and 30% for [A]. The total area of all sims, sea sims included is 1632.44 square kilometers. That means, if you packed all the sims into one, giant square continent, it would measure 25 miles on each side, 625 Sq.Mi. (green square on map), or slightly larger than the city of London, England. If all of the 44+ million came on at the same time, and spread out evenly, there would be 1700 avatars on each sim. The entire grid would shut down, long before they could all get on. With the typical number of people on line, spread out evenly, the number would be a more comfortable 1.5 avs per sim. This is more like the numbers I see, when I visit sims to write about. When avs gather for events, lag increases, because they are being rendered by the computer that you are viewing them on. Most of us can handle a party of about two dozen avs, but there are some clubs and events that attract such large crowds, low end computers get stopped in their tracks, literally.

Some final words on the grid map:

You can use the world map in your viewer or at the SL.com site. and zoom and pan to see all of the grid. I found the composite maps online, added details and reduced the size to fit here.
The gold diamond, just below center, is the location of the Sunweaver Estates, home to the SL Newser and this reporter. Download a copy and find your home sim. I'm going to hang the map in my castle. The sims are on a blue base, giving the impression of islands on a vast ocean. In fact, most of the blue area is really space which has no sims or servers at all. If you could go there, which I recently did, you would experience being a singularity. There is nothing to see in any direction. You cannot move and even your [HOME] button won't work. You are point A. There is no point B.

The base map would also make an incredible movie, with each frame advancing one month since the beginning of Second Life. Another animation could use overlays to show population densities, over a day or week. How about an animation that shows everybody that's on with a dot of different color,depending on the time zone the player is in real life. I don't know if the data needed to make such animations exists. It would be a major project, any way you look at it.

We hope you have enjoyed the little map-hopping adventure. Hopefully, you'll be inspired to get out and blaze your own trails, in our vast virtual world. There are endless adventures for all of us.