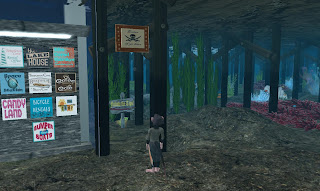 Monday September 19 was "International Talk Like a Pirate Day," an informal holiday made up about two decades ago that gained publicity thanks to a syndicated newspaper humor columnist. Those taking part are encouraged to speak a little pirate lingo. In real life, there are occasional stunts, such as the "Krispy Kreme" stores offering a free doughnut for anyone willing to talk like a pirate. In Second Life, there's no shortage of ways one can have some pirate fun. One can grab a pirate outfit from a store, some of which are free such as this one. And one can usually find some pirate events somewhere. 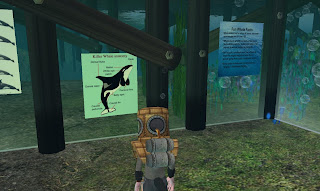 In the past, the Newser has done a number of articles such as how to talk like a pirate. We've also reported on some pirate-themed places, as well as some pirate parties. This year, I did find one thing a bit different: a pirate maze. It was located underneath the piers in the Templeton Cove sim.

"Enter if ye dare!" challenged a sign with skull and crossbones just over the entrance. Going about the maze, the way was marked with the occasional red sword pointing the way, with the way through usually where the piers were widest apart. Barriers, either resembling glass or invisible, were there to block people from taking the wrong path. There were also a couple "no drowning zone" signs where one could pick up a steampunkish diving helmet and wear it. 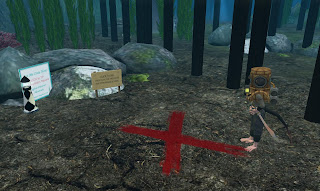 Along the way, there were occasional sea creature facts on the glass panels between piers. There were also occasional obstacles such as pits, one of which had to be crossed with a rope bridge by "sitting" on it in a certain spot. At least one obstacle would teleport you out of the maze and you'd have to start all over.

Finally at the end of the maze, about in the middle, there was a rec "X" on the ground. There was a nearby shovel rezzer one could touch for a spade, and start digging. And what I found underneath was ... nothing? Arrrrrrr! Seems a scurvy pirate beat me to th' booty, shiver me timbers. Oh well, I had fun navigating the thing.