Among the LMs that Bixyl sent me recently, there is one for a sim called Tableau. I stopped here long enough to set our own LM and then headed to Creation's for Parkinson's, to write about it first. My first impression of Tableau was that although it was in ways ugly to me, it was also, somehow, very interesting and might even be a fun adventure. 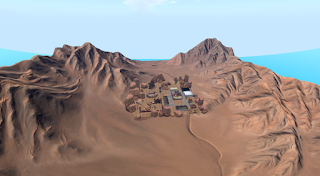 Before we begin our adventure, our readers must understand the language being spoken. Mediators know that disputes often arise between two parties that both want essentially the same thing, because of not knowing the other party's definition of the principles in question. If we tell readers that Tableau is a fun adventure, they are probably going to disagree. To get on the same page, let's sit in on the first lecture given at Clown College.

The Professor wears a silly looking cap, called a mortarboard, and a bulbous red nose and is explaining why people laugh.   Laughter is a release of tension. If you are struggling to figure out something, when you finally get it, you say "Aha". Other jokes are funny, because the teller uses a different meaning (double entendre), which is known about but not expected in the story. Another useful way to make us laugh is called "Slapstick." When we see a one ton weight, thrown off a cliff and heading down towards our position on the ground, we laugh with the relief of seeing it flatten the coyote, instead of us. OK, we can now go to Tableau and have a better idea of why we think this is a fun adventure. 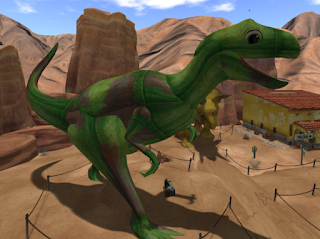 Arriving on the sim, we are in a desolate town, in the middle of a desert. We wonder if there are any people that live here, if so, why. A sim surround adds to the impression that we are in the middle of freakin' nowhere. If I was a child, growing up in this place and was asked, what would I like to be, when I grow up, the answer would be, "I'd like to BE.......any place but here."

It seems that, to save a dwindling economy, the town created a tourist attraction, called "Dinosaur Park". The three dinosaurs are impressive in size, but lacking in realistic detail. Perhaps they were made from sheet metal, salvaged from the many vehicles found dead in the desert. The town budget couldn't afford a sign painter, but some old weathered boards and a black crayon let us know which way to go. 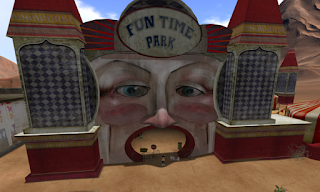 Down the road, we spot an earlier attempt to draw tourists. It is called Fun Time Park, but something evil has destroyed this place. At the mouth entry to the park, outside authorities have blocked entry, with signs saying Closed, Condemned, Quarantined and Infectious Virus Area.

Sha is here for a story, not the rides, so, pulling out her Press Pass, walks boldly through the gate to the middle of the park. There is a black hole and signs of toxic waste. A Newser Press Pass will also shield you from harmful radiation. Sha marches straight into the black pit and drops into a glow in the dark, day-glo chamber. 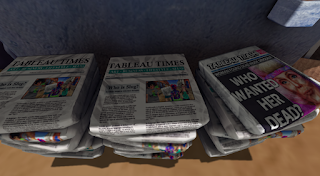 Naturally, Sha loved the pretty lights, but wouldn't stay long, not having her Geiger counter or a sonic screwdriver in her pockets. One can't help but begin to think that this poor town is ripe for a take over by some crazy gang of hippies, ha, ha, he, he, ho, ho. Is there a secret gang, calling itself "SLUG," that is responsible for the tagging on the local walls?

Passing by a news stand, the headlines show that the residents are very concerned about the identity of SLUG and a dead lady, found inside one of the dinosaurs. Perhaps they should be more concerned with finding a way to remove the two giant, rusted atom bombs from their town, but maybe they are saving them to make some new dinosaurs. 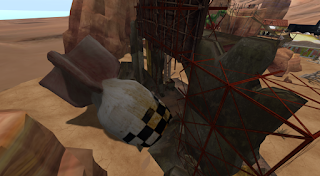 So now, as we wrap up this tour, we count the hands of the readers that got their eyes poked, hair pulled out and pianos dropped on their heads. None? I guess you all had a fun adventure. We send it off to print and close the light for a rest. Hmmm, are bunnies supposed to glow in the dark?