"My Father's Place" at Aero Pines 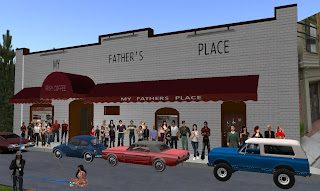 "My Father's Place" was a music venue in Long Island New York which ran for sixteen years, from 1971 to 1987, with about 3000 musicians performing close to 6000 shows, some broadcasted over radio, some recorded. In Aero Pines park, the music club has been recreated, where visitors can listen to music and dance, read up about the real club's history, and more. 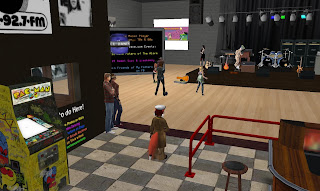 Dropping by recently, even though this was a time of day fewer people are in Second Life, there were several people inside. Most were dancing away, playing the trivia game, "Question 35 of 50: The band White Snake was rumored to be named after the lead singer, David Coverdale's….?", or both. There were also a few people outside nearby doing some fishing. Near the front door was a display of the myfathersplace.com website, showing the times of broadcasts from Glen Cove, New York. On the inside, the place was done much like a real life club, with a bar area separate from the dance floor, with stools, a few booths, even a couple 80's video games. On the wall were a number of pictures of the real life location, and a little history.

"There was a time in Long Island's cultured history when the whole world looked here for the next big trend in Rock n' Roll. This was between 1974 and 1980, the heyday of My Father's Place, a cabaret in Roslyn and Michael Epstein, known as Eppy, ran the whole shebang. Along with My Father's Place, which opened on Memorial Day in 1971 with a concert by Richie Havens, a confluence of entities created a scene that would influence music for decades to come." The New York Times, August 27, 2001. 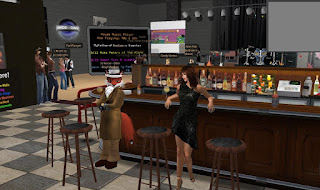 Cindy Bolero, the owner and manager of Aero Pines, was also there. "It's kind of (a) live venue and museum," she told me, "a 3D version of the legacy rock club's book and documentary." She went on to say of their broadcasts from Glen Cove, "Every couple of weeks we have someone famous. So far this summer we had the real China Crisis from Liverpool, Denny Laine from Wings/moody blues last week, coming up Mike Peters of the Alarm." She mentioned the Facebook group so far had close to 10,000 fans.

Cindy's big challenge was getting fans of the venue who hadn't been in Second Life before to the place, "Been working hard at getting it easy for noobs. ... The 3D venue is still experimental. The hardest thing to do is get new users to Second Life, but these guys have a lot of enthusiasm. ... Secondlife viewers are the deal killer. Too complex and overwhelming, frustrates new users, they don't come back. Things need to be simple, simple, simple. Linden Lab wont do anything about it. ... and they wonder why its still less than ten percent stay and play. ... the complex interface keeps it from being more popular with the masses." 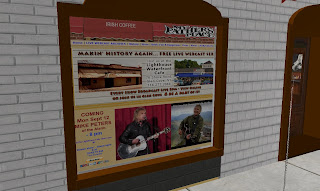 She went on about the club, "I feel its not just another club either. We stream bands, which is rare in Second Life because it takes a crew to live mix and shoot. We also stream famous artists, but its a challenge getting them to understand the virtual bar and get them to talk to the avatars. And its hosted by famous music promoters and radio station DJs that have a name in the industry. They are based in New York and I had much history to learn, but it is parallel to what I was doing in the 70s and 80s here in the San Francisco market. Basically when we were all in our 20s and 30s working in the music industry, We dealt with the same artists, and same music industry ecosystem of  'Band plays club, Newspaper does reviews, their record in the stores, and their record on the radio.' Now I'm trying to bring them up to speed with social media, live video webcasting, online label, activities to promote that, and that wacky virtual bar they wanted to try. Many many challenges on this journey. We've had an artist deny the video webcast at the last minute because their agent was paranoid about something or other. Meanwhile a whole crew just set up everything. We don't make music. We showcase new and famous talent. We meaning the MFP productions team.

"The history is the My Fathers Place rock club (300 seats)  from 1971-1987 featured pretty much any band or artist you can think of in that era. Just search a band with My Father's Place. Like 'Police My Father's Place' or The Ramones 'My Fathers Place.' Or Billy Joel, who got his start there as well as Bruce Springsteen. And even through the disco years they stayed a rock venue. Doing a historical build in SL is a lot like doing a documentary. So this is basically a reboot of how things were done and how entertainment companies are trying to survive today.

"What I was getting to, is back then the club got too famous for its size. So the famous underground rock radio station started bringing a truck and did live broadcasts. And since then much of the recordings have been released or bootlegged all over the web. You can say they were the first 'sharing' social media by broadcasting the shows live so more could listen."

Cindy eventually had to head out, "I'm excited to be a part of something that may actually give virtual venues a boost outside of Second Life."