Some time ago, I volunteered to help an old friend, turned new neighbor on Sunny Beach, Erik Mouse to  build the sim of his dreams. He showed great interest in providing attractions for the community to come and have fun. I have become his court Magician and councilor, to teach him the power of Imagination. The force is strong in him. 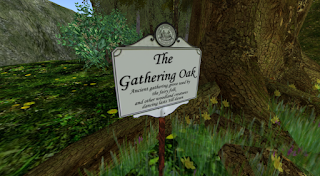 The perimeter of the island sim provides beaches, boating and surfing. The interior of the island is a thick forest, known as "Mythica Woods." At the North end of the woods, there is a clearing, with a spring fed pond. When I made the Sunweaver Tour video, I called this area, "the local watering hole", because it seemed like it was a natural gathering spot https://www.youtube.com/watch?v=f144n1NYcos .

There are several Hobbit style homes, a camp fire, a TP and Stargate. We built a tiki hut club and called it "Surf's Up," to draw attention to the surfing wave, on the North shore. Erik was eager to begin having weekly events, on Saturdays at noon SLT. I let him know that it would be his adventure and I would not be on club staff. He is the owner and should make his own rules and provide any staff and DJs for any events scheduled. 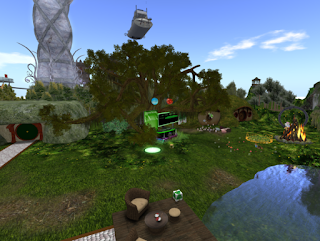 Well, Rome wasn't built in a day, but after three weeks, our little friend was feeling stress, because his club had yet to become an overnight success. He came to the Newser staff meeting, seeking help in getting more visitors to come. At the close of the staff meeting, Erik, Bixyl and I convened to Surf's Up, where an event was in progress. This was the ideal location for the discussion, since we could also get additional input from those on the dance floor. Indeed, I took notes as Skylark LeFavre began to describe a different decor, from her imagination. She described a clearing with a large oak tree..... Before saying another word, I was already seeing the complete picture.

That night, I searched the marketplace for oak trees. I found a towering ancient oak tree, that looked like the perfect fit for Mythica Woods. I spent the night, with nobody around, installing the oak, removing the tiki hut and moving the club equipment under the tree branches. The next day, after seeing the new set up, Erik sends an IM, asking if I had left anything for him to do. Indeed, there were a few objects and the contest board, which I could not move. Later that evening, I attended a weekly dance event, at Creations Park. They have a rotating circle sync dance that is a wonderful thrill to partake in. After the dance, I met up with Erik again. I told him that I think a circle dance would be perfect for the new club layout, so we went about trying to find a good one. That was an adventure of it's own and we nearly got booted off of one RP sim.

When we found an in world demo, of one I spotted on marketplace, we tested it, bought it and took it home to set up. Words could not explain how enjoyable it is for a group to share. I knew I would need to get some pictures or video of a group doing the dance. For two days, I asked friends to come try it. At the close of the following Happy Vixen event, I announced that I would be making a video and all were invited to be in it. We got a nice little impromptu group going and the camera began to roll. I captured 10 minutes of video, before folks needed to go and posted it, unedited, on Youtube.

Recently, I made the comment that where the sky and earth, fire and water all meet is a place where strong magic is made. There's lots of room to dance and several group sitting areas, if you'd rather sit this one out. There's even a cuddle basket, if you like that kind of magic. The club will now be known as "The Gathering Oak" and will have a weekly Saturday noon dance and you can also come any time, to enjoy all of the sim's attractions.
Aloha,
Sha
Posted by Bixyl Shuftan at 6:00 AM