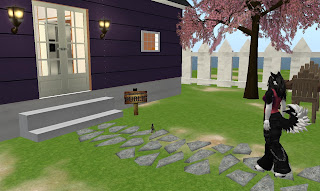 Recently, a friend sent me a landmark to a noteworthy location, "Lady Lorelle's Giant Purple House" at Bahia Island. Giant houses in Second Life are nothing new. Early on in the virtual world's history there was "The Greenies," a sim that was a giant kitchen and living room that made visitors look mouse-sized, wowing residents until it's close in June 2010. While there have been a few since then, such as the "Land of the Giants," none have gotten the acclaim of the object of the little aliens' exploration. With them in mind, I decided to take a quick look at the place. 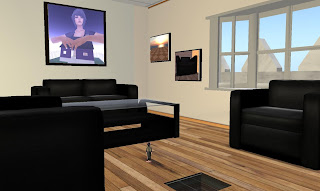 Upon my arrival, I found I wasn't alone. There was a tall fifty-foot huskygirl nearby. She was Away-From-Keyboard, so she didn't answer my questions, but it was a sign early on the palce had attracted some fans. Going inside meant hopping up a few steps, opening the door, and walking in. As expected, everything was giant-sized from the furniture in the living room, to the sink in the kitchen, to the bathtub in the bathroom. And yes, there were a couple giant-sized mousetraps if one wanted to tempt fate to get at the cheese bait. 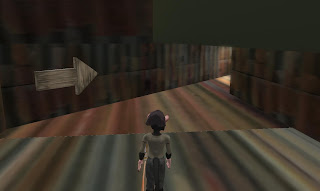 There were also a few mouseholes in the wall. Some were simple shortcuts to other rooms. Others led to secret passages. One led to a secret room filled with posters of classic movies featuring giant monsters. as well as a small bar (guess mice have to have a drink too, at least those with opposable thumbs).

Looking up her profile, Lady Lorelle described herself as, "I'm... big, and I'm an even bigger fan of giant avatars! If you'd like to see one of my many giant avatars don't be afraid to just ask," and invited people to drop by her place, giving the location out. She had also founded two groups, "Lorelle's Giant Purple House Group" and "Mega-Giantess," the latter for fans of giant female avatars. 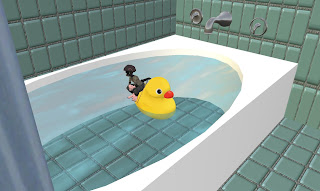 I was a bit occupied with other matters at the time, so delayed in writing about the place for a couple weeks. Going back for a quick peek before writing about it again, I found to my sorrow the place was gone. The land had been sold, and in it's place a new club.


So sadly besides a story about the interesting things people can create in the virtual world, the tale of Lady Lorelle's Giant Purple House is also that of how fleeting in time such places can occasionally be.