It’s around that time October 31st which is Halloween the time of year to dress up and see thrills and chills through and Second Life. ZZ studios as always builds their "Madhouse" every year to share fear. ZZ studios is usally a studio for making adult material. But for the month of October it’s all about the Halloween. 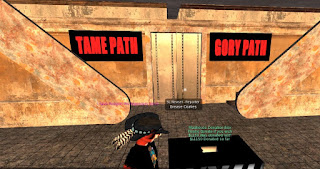 When I walked into the madhouse there was a tame path and a gory path. Being brave and like most characters in horror movies I made the wrong choice and picked gory path. Floor by floor I saw gory surprises and scary sound effects. You’re walking around in a diner with skeletal remains and GASP a zombie appears with a butcher knife. Also backtracking isn’t allowed as I tried to go down the stairs and I was blocked by an invisible wall. ZZ has some clever scripting to make their madhouse a truly mad place.

For each floor it takes a minute or so to navigate through as jumping over things won’t work (trust me I tried). So it’s not a clear path. I wandered around the ZZ sim and found a statue and playground equipment that seems possessed by evil spirits within SL’s pixel grid. Along with that was a SL avatar who seemed forever as a statue I the avatar’s profile and any commutations at all will fail as of course it’s a statue.

After that I checked out the tame path in the madhouse. It seemed much less scary then the gory path. There was a broken window path and the next floor was animated furniture triggering when you walked past. As the saying goes "you fell for the trap." In the tame path I fell into a trap door was sent back to the lower floor.

I was able to grab Darkefur Fraker who’s one of the top vixens of ZZ studios to hear what she had to say, telling her, "You did a great job at your madhouse. How long has ZZ studios been doing the haunt?"

Darkefur answered, "Since... 2011 I believe. Maybe 2010. I've lost track of how many I've built.  *heh* Not a physical award.  I believe we made the top 10 haunted attractions a few years and maybe got an award one time early on." 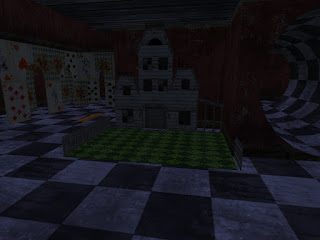 "Still being in the top ten is a great reason to celebrate scares to share," I stated.

Darkefur agreed, "Yup. As well as being mentioned in many newsletters/blogs/etc.  That's why I say I don't know if we won an award or not since there's so MANY of those types of newsletters out there."

I told her, "Being mentioned in newsletters and or blogs is still an achievement knowing how large SL is. It's hard to be noticed on such a massive virtual environment."

She nodded, "Yeah. And I know it's been mentioned in several over the years."

I then decided to amuse her with something I'd heard, "Is it also true that you enjoy being with stallions?"

I egged her on, "Haha! So readers of the SL Newser know."

Darkefur giggled, "I'm a kinky fox, as you should know." 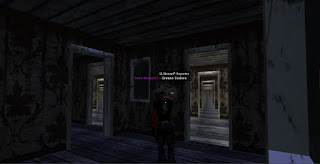 Darkefur also suggested that people can challenge the tame path as well for a chance for a new car. However she was undecided what car to get just yet. So as you read this article that should entice you to give the madhouse both tame and gory paths a test drive at the chance at a new car that you can drive around Second Life and be the life of the Halloween party or any party. Darkefur also added “Giveaway car will be mesh, of course.  And mod/copy ok.  SO people can mod it if they want.”

So you might want to show up in a stallion avatar and perhaps charm Darke into clues for the tame and gory paths. A brand new car is a very tempting and grand prize. A good excuse to brave zombies and other scary things in ZZ Studio’s Madhouse.