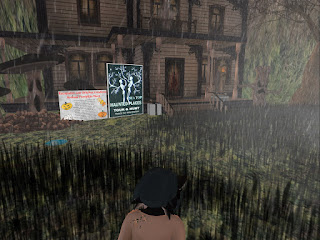 It was raining when I arrived. I could see the tomb, and I could see the house. I continued down to the graveyard. It was a small graveyard. I saw three graves. One of them said something about forwarding an e-mail. Wow. I looked into an open grave. There was a skeleton in there. Brr!!

I continued on but there was not much except to go to the house. It was a small house. It only have one floor. I went in that house. The first thing I saw would be the haunted bookcase. Whoa! Hold on a minute. Haunted bookcase? I clicked on it and got some notecards explaining about the property. That would be interesting. 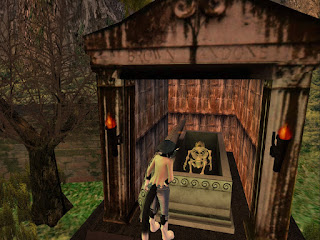 
This was an interesting place. I mean how many places have haunted bookcases? I have a strong feeling that not many do.

I continued to explore this interesting room. On one side, there is books. Unlike the haunted bookcase, these are anything but haunted. They are just that, books. Once again, I avoid the rats as I explore the small place. 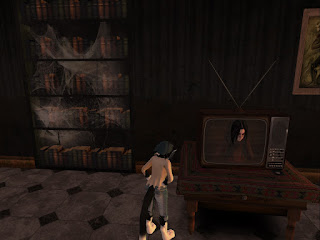 I came to the TV. It looks like a normal TV... until a girl's face came through the TV. Ack! What is this? Is this a ghost who are peeking through TV? I have no ideas as I stared at TV in shock. She kept peeking through TV as if she was waiting for someone.

I stopped at the door, peeking out at the rain that is coming down rather heavily. The house had been very interesting. Small but yet, loaded with stories that it is itching to tell.

For anyone who would love to explore a haunted house, this is the place. I would really recommend it.