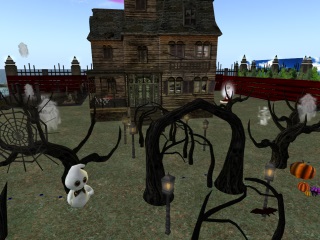 Never before has a haunted sim terrified me as much as Vivi's Haunted Hill. For some of you, yeah, I take the horror things a bit too seriously. Perhaps that's my fault. But the thing is is that I have a lot of fun going to Vivis Haunted Hill.

I went into the house. The house actually have three floors. The first two floors are the normal floors. The third is the attic. You would see a door that would lead to the stairways going to the attic. When you go up the stairs, you would see something in the attic. If you want to know what that is, you'd have to go. That's a scary place, but also fun. Speaking of rooms, there is a room on the first floor that houses the dead. It appears to be a living room as well. Ghosts are in that room.

The rooms on second floor has a floating bed. Another room on the same floor has someone who disappears into bed. I don't know what that is all about. In one of the rooms on the second floor, I click on something and was given a few options. One of them would be “Escape” along some other options like “Victim.” But knowing myself pretty well, I continued to explore the house. I came upon the room where someone disappeared into the bed. That figure appeared out of the bed, shook its head, before disappearing into the bed again. It didn't take long for me to leave the room. It makes me feel like I did something bad.

I went up to the third floor. You can get to the room by taking the stairs. When I got there, the only thing in that room would be candles and shelves full of skulls. With that in mind, I went down to the first floor.

This had been a very interesting tour. I did do something in that house. It's not often I get to choose between “escape” or “victim” as well as other options in that room. If anything, I would recommend Vivi's Haunted Hill to my friends.