The Black Hills Forest, located at Le Dome (36, 111, 21), is a beautiful and fun place that celebrates many of the best sights found in America.  Set in a beautiful park-like setting, it features statutes, photographs, and memorials from places found all across America, from the Atlantic coast to the Black Hills of South Dakota.  There’s even a zoo with animals from around the world.
The first amazing thing I learned about Black Hills Forest is that its creator is French.   Benoit Lednev lives in Paris in real-life.  Because of time and language issues, we were only able to talk for a few minutes.  I wasn’t able to learn what motivated him to create such a beautiful tribute to America.   But It's a great site, and Benoit said that he plans to expand the zoo even more. 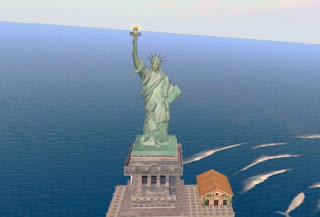 It is fitting that one of the most visible landmarks on the sim is a replica of the Statute of Liberty, which was a gift from France to the United States in 1886.  The real-life statute, which is located in the New York Harbor, was designed by Frédéric Bartholdi.  In SL the Statute is located at Le Dome (34, 26, 21).   Benoit Lednev has displayed a number of photographs of the real statute in a building next to the replica.    Nearby you can pick up a free souvenir t-shirt, too.   As soon as I put it on, I felt like a tourist on vacation.
The sea’s edge is the main landing spot for the Black Hills Forest when you teleport to Le Dome (36, 111, 21).  There is a replica of the Gloucester Fishermen’s Memorial at the landing point.    The RL memorial was built in 1925 at the Stacy Esplanade in Gloucester, Massachusetts.   The SL replica includes memorial plaques that contain information and the famous inscriptions found at the real-life statute.
From this point you can go northwest to the zoo or walk straight ahead to the gazebo.  Inside the gazebo are pictures of the site’s attractions.  Click on the one that interests you to be teleported there.
The zoo is a great place to relax and have fun.   There are animals from all over the world, including  a Red Panda from China, polar bears and penguins from the ice caps, parrots and monkey from the jungle, giraffes, lions and tigers from Africa, and my favorites, a wolf pack from the wilderness.  There’s a small aquarium, too.  Unlike their RL counterparts, the SL animals don’t have to be kept behind bars.   The toucans and parrots fly, and the monkeys scurry around and get into things.  You’ll even find one or two species that are extinct in RL but living here in SL.
On one of my visits, a woman and a little girl were visiting the zoo.  Ray Ray (rayleigh.toxx) had brought 11-year-old Teresa Amulet (keira.amulet) to see the animals. They seemed to be having a great time. 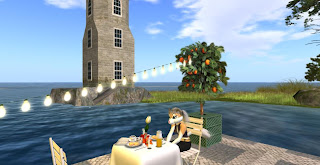 At one end of the zoo is a beautiful cafe where I was able to have some breakfast.   The setting is quiet, and the tables are set with beautiful dishes and a rose.  Orange trees grow here, too, so their juice is the freshest in SL.
After breakfast I left the zoo area and continued to explore.  I came across a replica of Mr. and Mrs. Frog Fishing.  The real-life statute was created by David Phillips in 2003 and is located at Boston Common Frog Pond.  Another interesting piece of art is the replica of the statute, “Menotomy Indian Hunter,” by Cyrus E. Dallin.   The original was created in 1911 and is located in a park near Arlington, Massachusetts.   Since the majority of us will never be able to visit these real-life statutes, the replicas are the next best way to experience them.
There are a few reminders of the worst times in America, too.  There is a memorial to the Salem Witch Trials, including a long row of headstones of men and women who were killed there.   The date was circa 1692.  In another area, photographs of Rosa Parks, Martin Luther King, Jr., and other civil rights workers are located in the building at the Black Hills display, locate near Le Dome (213, 165, 60). 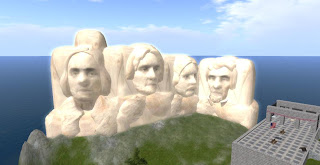 As in real-life, the SL Black Hills has Mount Rushmore.  To get to this spot, you don’t have to travel for days to North Dakota either.   It’s located at Le Dome 213, 165, 60.  If you don't want to teleport, there's a chair lift you can ride to the Mount Rushmore site.   Catch the lift at Le Dome 246, 121, 21.
Inside the building at Mount Rushmore are photographs of many great Americans, from Alexander Graham Bell to Amelia Earhart.  Inventors, scientists, writers, and astronauts are featured, as well as a section that includes Rosa Parks, Martin Luther King, and other civil rights leaders.

On the plaza there are benches where you can relax as you gaze at the four famous presidents, George Washington, Thomas Jefferson, Theodore Roosevelt and Abraham Lincoln.  There are picnic tables nearby, too, but watch out for the mountain goats.
Many other treats are waiting to be explored in this beautiful park.  A tea house sits near a small pond that you can float in.   Trails meander through trees and over streams.  The sim has places for couples, too.  Among them are a campfire near the lighthouse and a nearby beach cottage.  The best couple’s spot, however, is the eerily beautiful Dark Romance section, located at Le Dome (229,49,21).  Best to visit it with someone you love.

Like his fellow Frenchmen so long ago, Benoit Lednev has given a beautiful gift to SL residents to enjoy.