Stanford is the fourth sim to come on line in Second Life™. I have to confess that I don’t think I have ever visited there until this article. Two big parcels are for sale on the sim, rendering it half the size of most sims, and there are a few ban lines on some of the properties. 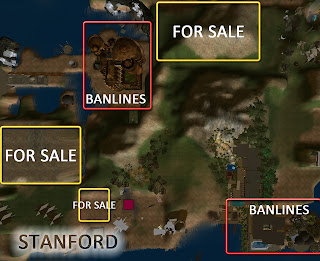 I will use this opportunity to opine about ban lines a bit. I…hate…them. Hey, ban line people, the moment that I see them, I use my camera to look into the place that is blocked out. Just because folks think they are important enough to believe they can have privacy in Second Life™ doesn’t mean they should make things ugly. Ban lines interfere with transportation and movement in general here, and I oppose them simply for that reason. Please don’t use ban lines. Especially, do not use the kind of banlines/security I encountered on Stanford. This security device sent me home a few times before I had time to fly away, which I found quite rude.
Anyone who wants access to you can figure a way to get it, and you disturb the serenity of nomadic people like me when you use them.

Rant over: We now return you to our regularly scheduled history.

Before Jessie, Stanford was one of the weapons sims, or the Outlands as they were called. This all got changed when Stanford, along with Federal, Hawthorne, Shipley, and part of Clyde were changed to residential sims. This happened in 2003, a long time ago, in Second Life’s™ timeline, way before most of us remember. Since this time Stanford has been home to Annie Butlers residence, and to the Stanford mountain. Most of the rest of the island has changed often. 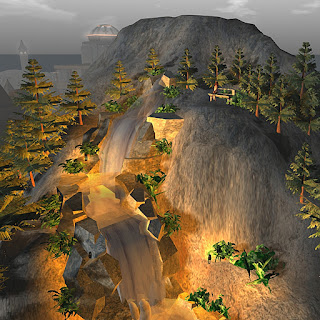 Stanford Mountain exists thanks to  the benefit of being able to terraform the early sims to great heights. The peak of the mountain overlooks the whole sim, and provides a relaxing break from the stresses of everyday Second Life™. There is a nice old-school bench there to sit and ponder your next build project, relationship, or whatever. The really striking feature of the mountain is the stream and waterfall that meanders down the mountain, and was build by Jake Cellardoor, whose profile said that he is ten years old! Jake is responsible form much of the parklands and the waterfall on Clementina. One of the lessons I am learning is that there are a handful of old-timers who are devoted to preserving, creating, and maintaining the beauty of the mainland.

Annie Butler’s residence is clearly based on Frank Lloyd Wright’s Falling Water. It is perched to the south of Stanford Mountain at the base of the falls, and was built by old-timer Juro Kothari, who is also my neighbor on Varney. Sadly, he is never around. 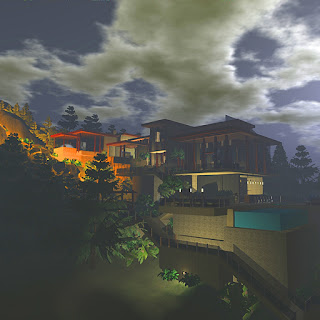 I recommend highly that you go and visit this house. Remember that it was built before the era of sculpts, flexiprims, and mesh. Yet, it is a beautiful representation of the Arts and Crafts movement in architecture and furnishings. The look is timeless, luxurious and earthy all at the same time. Outside there is a deck with many lounges, and an ultra-modern infinity pool. If you don’t know what that means, you will have to go look. The house is open for wandering, and it actually would make a nice date outing. Don’t miss the works of art, the hot tub, or the very necessary kitchen.

I had thought to contact Annie and ask her about her time on Stanford, and her lovely home, but it seems that her profile makes it plain that she is now committed to medieval role-playing, and has left her previous second life behind. One of the reasons I love Second Life™ is that you can be whatever you want to be, and change your course at any time. I respected her desire to not be contacted. 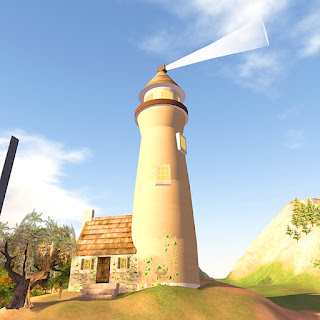 The last public building on the island is a lighthouse—one of the icons of Second Life™. It is on group land owned by the aforementioned Annie Butler and two other people. It is a simple build, well-executed by a younger resident: Sandy Clymer, of Pillow Talk fame. You can teleport to the tower to have some more views.

None of these plots have water access, and all are very expensive, but reflect the historical value of the land, and the almost limitless terraforming. The one plot that was on the water that was not for sale, but for rent was attractive.

As I conclude the fourth visit to the first sims I am struck again by how little history has been preserved. I was pleased to find that much of the topography of Stanford remains unchanged, but there is little of the old sim that is identified or recognized. I know there are history museums in Second Life™, and many places that have information about the past, but I wouldn’t want to go visit the Alamo in Michigan, and I don’t want to see have no place to go to see the roots of this world that I love.