Rust and the Goonies

One of the LEA sims was given a new look and a new name, Rust. A surreal-looking land of abandoned machinery, it was described in the destination guides,  "Rust is a world with a strange mix of machines, chained trees, rusty mushrooms, birds, balloons, butterflies, spiders, elephants, and gear flowers. Watch as the corrode, flake, and sway in the gentle breeze." Credit for the build goes to Cica Ghost. Dropping by for myself, the place was quite an experience. The sim had a look of abandonment and decay, as if the people who made the place were no more or having to move due to some unknown disaster. There were various buildings and structures around. While rusted, there was no shortage of movement as gears still turned around, conveyor belts still moved parts, and other examples of mechanical motion. There were also metal animals there, or rather statues of. There were rusted metallic elephants one could stand and pose on, in addition to metallic birds. There were also rust color trees with metal bands and chains on them, and grass swaying in the wind, also the color of rust. 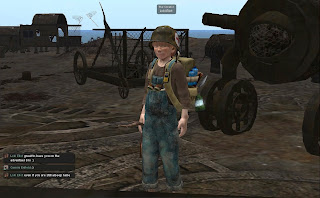 I was still close to the entrance area when I heard some youthful-sounding chatter nearby. Looking around, I noticed a number of child avatars rezzing. "This place is full of tots," one lady commented. I wasn't sure what was going on until I noticed a couple names: Everest Piek and Loki Eliot. The Goonies had dropped in.

For those who don't know, "The Goonies" was a movie in the 1980s about a group of kids who go on an adventure in search of a pirate treasure to save their parents' homes. While the SL Goonies home in the Escapades sim is just fine, they still have a great love for exploration and adventures on the Grid. Gemma Cleanslate wrote about them a couple years ago (article here), and they're still going at it, led by Loki. 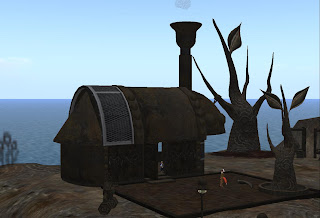 Everest saw me and greeted me, "Hey Bixyl, what's new? … We're just on a Goonies adventure. …. gotta run, c'ya around." He smiled and left. The kids then began looking over the place, "Helephants!" "I think we found Loli's old trumpet." "Really?" "It's inside." "Great to have you on the adventure, bro, even if you are still asleep, hee-hee."

It wasn't long before they were on their way again, their leader Eliot saying, "Goonies second location, meet you all there, Tamarillo Island." And they all began heading there, "GOONIES NEVER SAY DIE!" And just as quickly as they appeared, the kids were gone. And Rust reverted to it's usual quiet.

If you have the time, even if its just five or ten minutes, Rust is a must-see location, located at LEA 13 (212, 49, 22). Draxtor Despress recently visited and made a film of the location (below).

As for the Goonies, their sim Escapades is welcome to visitors. They do take occasional new members, any child avatar interested should talk to one of the group about initiation. Loki has been recording their adventures on blogs. While his more recent site seems to have crashed, his older one at (http://lokiboy.blogspot.com/ ) is still up. He's also know as a builder in Second Life.