Ritch is the second sim to come online in Second Life™. I couldn’t wait to go and explore, because I figured I would run into a lot of history and layers of builds and famous avatars who had left behind a little prim piece of their inventory. I couldn’t have been further from the reality of Ritch. 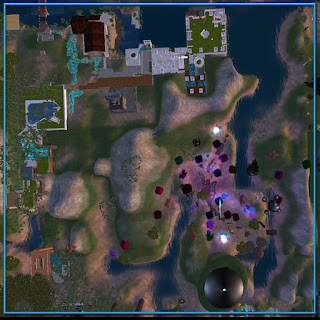 Before I start one of these explorations, I look to see what has been written about the place, so I can come from a different angle, and not duplicate content. I was surprised that there was so little written about Ritch. Further proof of its almost anonymous past came when I looked for pictures of the sim on Snapzilla, a website that has documented pictures of Second Life™ since 2005 (http://www.sluniverse.com/pics/Search.aspx?Sim=ritch). There were 27 pictures in total that had been taken on Ritch! That’s very little compared to other sims, but not surprising with the lack of history information about the sim. Even the Second Life Wikia, where I often go for historical information was woefully inaccurate in most of its accounting for the space on Ritch. This seemed a mystery, so I decided to do a little investigative reporting. 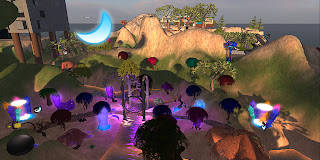 The sim of Ritch seems to be composed of two large parcels: Exotic Park by Sapphire Moon Entertainment, and Casa Del Sol Fleamarket. The Exotic Park is a mystical place composed of mostly violet trees, benches and crystals, which are probably familiar to anyone who has ever looked at the Second Life™ map. There are no stores and no clubs—just peaceful paths that meander through the purple surroundings.

Inspecting things in Second Life™ is no difficult feat. A few right clicks, and the owner and creator of any object becomes apparent. Ameshin Yossarian is the creator and owner of this sapphire park. The name seemed so familiar to me, and in fact belongs to the creator of the great clothing of Curious Kitties, a store that I continue to frequent. Speaking of curious, it seemed odd to me that so much land was left to just be a park. As I explored, I started to encounter prims with teleports to a place called Sapphire Moon. Just out of curiosity I clicked, and was given a landmark that I took, and ended up on a sim named Sapphire Moon. It seems that Sapphire Moon is a casino. The only history I had been able to find about Ritch was that it had housed a casino in its early days. 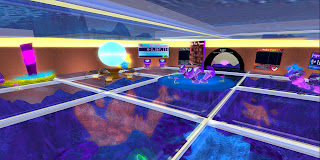 I know that I have seen the gambling machines creeping back into Second Life™ over the last few years, since it was banned, but I had no idea that casinos could be around with such impunity. I noted that the machines are played with “stars” not money, but the stars had to be purchased with Lindens, and the stars could be traded in for goods in a redemption center. It reminded me of Skee Ball. Is this gambling? To me it seems to be so, because you pay Lindens and you get a payback or not. That is a game of chance.

For the most part, the sim is just comprised of the two parcels. Aside from the Sapphire Moon Exotic Park there is a Casa del Sol Fleamarket. This parcel is just as curious as the other one. 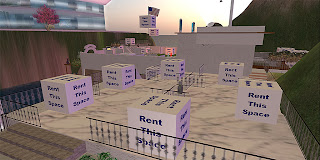 I made several trips to Ritch while writing this article. In all the trips there was never another resident on the sim every time I was there. Which brings me to the flea market. The market is empty; there is not a single shop in the entire space, which is about half a sim. Besides the market, there is a home, a bizarre satellite building, a park and some open space. There is so much open space, that it made me wonder. Dix Donovan, who is almost as old as Second Life™, and according to his profile actually builds for Sapphire Moon, owns the parcel. So, Ritch is all one big, happy and empty family. I wonder how long it’s been since either of these owners visited Ritch? There is one large store on the Casa del Sol Fleamarket plot, Curios, and it sells a small assortment of old-fashioned, prim built bracelets, mostly low in price. Not sure anyone would buy anything as outdated as these objects seem to be. I inspected them and they dated from 2004. Now I know why the place is called Curios.

So, in conclusion, Ritch is not a place to come and explore and find souvenirs of the early days of Second Life™. However, I will continue to visit the First Sims, because I know they are not all like this. They couldn’t be—right?