Zoe is the third sim to come on line in Second Life™. After my trip to Ritch last week, I was a bit disheartened, and hoped that I could find more history and better use of the historical space. I was not disappointed. 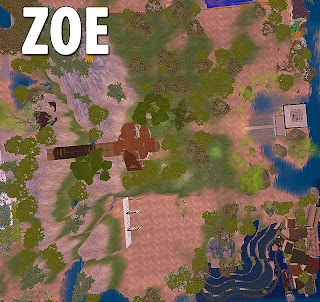 I started this story by looking on the internet, and again found little about the sim of Zoe. I have to guess that the creators of Second Life™, along with the earliest residents, had no idea that the world they had created would have the kind of staying power it has. Therefore, they didn’t think to respect the past, nor preserve it. The only way to find out might be to find and interview some of the early residents, which I will do, if I can find them.

Zoe is a very pleasant place, despite its lack of written history and residents. Again, I found a very empty sim each time I visited. Natoma, to the north, has many residents on it all the time, because of its status as a sandbox and it is the home of the Ivory Tower of Primitives, but few folks seem to venture into Zoe. This is a shame, because the sim really is a lovely place.

The main owners of land on Zoe are Myck Tackleberry of the Ridgeview Group, and SuluMor Romulus, almost as old as Second Life™ itself, of Zoe Garden Associates. Luckily, both groups seem to be invested in creating and maintaining a park-like atmosphere on the sim. 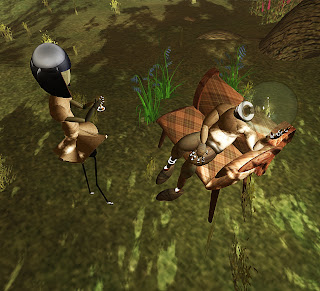 Myk’s land is a museum, strewn with works of art by Second Life’s™ creators. The Bryn Oh statue is immediately recognizable. Myk, himself is a lovely, understated builder. I have been fond of his slate gray and brick “clubhouse” for many years. The building is deceptively simple, impeccably assembled, and makes a great platform for the gathering of sofas and chairs. Go there and find the coffee table books in the central room. They are two picture books, one of which contains photos (by Yana Kawasaki) of beautiful places in Second Life™. I browsed through the volume and was both delighted and saddened. So many of the places in the book are just memories. The other book depicts a sim that you can still go see: Verdigris and the Vintage Village. Vintage Village is the home of The Golden Oriole, built by Oriolus Oliva—a delightfully mad antique store. The creator/owner must have some connection with the folks on Zoe, because aside from the coffee table book, several of the builds on the sim are by Oriolus. The huge Breughel Castle sits on the edge of the gray mountains that fill the middle third of the sim. It lords over the sim majestically. 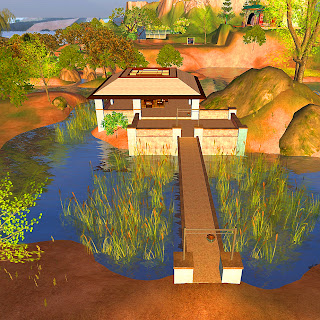 What makes the original sims so special is their terraform ability. Zoe is one of the sim blessed with plus and minus forty meter terraforming. What that means is that these sims have tremendous landscaping ranges. Huge mountains and deep gorges are possible, and are often present on these early parcels.

There is much to like on Zoe, and a bit of humor, unintentional I think, on the sim. There is a small parcel to the southwest of Sulumor’s land, and it’s called The 50Linden Store. However, as soon as you land, there’s a big sign advertising a furry  avatar and some digipants each for 125L. Huh? The other odd parcel is a 512 parcel owned by Ravenglass Rentals—a company owned by long-time resident Prokovy Neva. It is leased by Luka Peck, and has some iridescent sculptures in it. I have never seen anyone on the parcel, and I am in the neighborhood often.

All in all, the lands of Zoe are in good hands. Avi Arrow, Myck Tackleberry, SuluMor Romulus, and the Ivory Tower Group, headed by Lumier Noir. These are the names one sees when exploring this park-like sim. The owners seem determined to keep things looking pleasant and attractive, and they have succeeded in their goal. Traveling around Zoe is a delightful experience. Go up on the mountains and find the hidden meditation spot, with the luscious rock fountain. Find the bridge over the gorge and stare in wonder. It’s all there to explore. 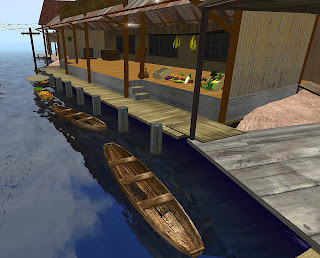 Zoe is next to the sim of Clementina, home of Governor Linden’s mansion (one of the oldest objects in Second Life™), and there is a build that overlaps Clementina and Zoe on the southeast corner. The build is a fascinating recreation of a Thai water market, colorful and realistic, down to the boats with different objects for sale. On the Zoe side, there are rice paddies, and stalls with vegetables and other items. Electricity poles dot the build, adding more authenticity to the area. The build is by Areal Loonie, but the land is owned by SuluMor, who has had it since the beginning of SL time, I imagine.

It’s interesting that Clementina, which is not one of the first sims, seems to have more history on it than the surrounding original sims. This seems to be just another mystery of the early days that may never be solved by me. What I need is some oldbies to tell me some stories. If there are any takers, I would love to hear from you.