This is my third article, in a series of reports on adventure tours in SL. Since starting SL, over three and a half years ago, I have always enjoyed discovering new things to do and see here. One of my favorite viewers is Nirans. On each start up, while the program loads, they post "tips." One of the tips says that Chuck Norris has completed SL 3 times. This always makes me ask, how is this possible. Every time I think I've done everything there is to do in SL, along comes something new, to me. There seems to be no end to what you can do here. I once wrote, in a song, "Each time I do discover is like love to me. By the time there's nothing left undone, what a lover I'll be". And so, with love, I offer my report on the Blake Sea.

I mentioned, in a previous article, the Blake Sea is a collection of sims which connects the continents of Satori and Nautilus and extends eastward from there. This eastern portion contains 195 connected sims, covering 12.78 million square meters. We will confine this report to the eastern portion. My expeditions began there after I got a free sailing ship from the marketplace. The ship is a large privateer, called Minerva, with three masts, stay sails and square sails and 18 cannons. It is propelled by the winds in SL. 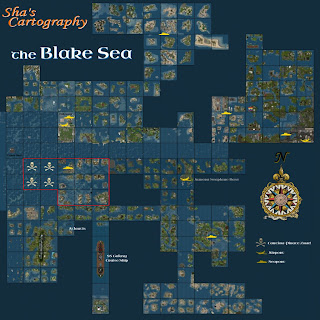 I needed an area with lots of room, in which to master it's use. Checking the Destination Guide, I found a number of ports in the Blake Sea, from which I could rez my ship and set sail. I found a port, called Diego, which had a pirate theme, which seamed to go well with my ship's design. It didn't take long to discover a couple of drawbacks that came with this choice. For one, there is a sea monster, called Kracken, that frequents the western end of the harbor. Once I found my way around him, I immediately discovered the next peril.

There are four sims, on the West side of Diego, which when entered, announce, in the title bar, their sim name and the warning, "Caution-Pirate Zone!" Later, I learned that these water sims, Kendra, Beaufort, Cannonade and Thunderer, are part a 13 sim group involved in the "All Seas Battle Group." In the shopping area, on Diego, you can join this group, check the schedule of planned battles, as well as buy pirate clothing, ships and other accessories. If you are sailing in the area, in a period ship and have cannons aboard, you are fair game for any ship that wants to use you for shooting practice. Cannon balls are objects that must be rezzed and many of the other water sims don't allow them. On the dock, bellow the shops, there are a number of ship merchants that provide docked show models, so you can see before you buy.

If pirates aren't your thing, you might consider hooking up with the United Sailing Sims, which has numerous yacht clubs in the Blake Sea and hosts regularly scheduled sailboat races, for all classes and sized boats.Want to just sail, without racing or battles?  Blake Sea is open to all and there are many places where you can rez your boats, be they wind, gas or steam powered.  I should mention here, there are rules to follow on the sea. Mostly, they are based on the SL TOS rules, but there is one I should mention. Sailboats have the right of way. Also, you must power down or steer clear of any races in progress. There are hundreds of islands to visit. Some have towns. Many are small and have only one or two homes on them. If you are interested in living by the sea, there are many places available.

Travel on water is not the only way to get around. The Blake Sea is also a great place to fly and there are a number of airports to be found. I even visited an aircraft carrier, just west of the pirate sims. The skies are full of planes, seaplanes and helicopters. I turn heads, when I fly in my Tesla UFO or my H.G.Wells time machine. If it flies, it's allowed. In most areas, you can also free fly, like Superman.
Look in the title bar, at the top of your viewer, for the icons that tell what is not allowed at any given location.

In addition to travel, Blake Sea also has a number of sites of interest. At the South end, you'll find the largest ship in all of SL, the SS Galaxy. The Galaxy is host to many events and, if you are laden with a chest or two of doubloons, you can rent a suite there. In my travels, I came across a large sim, called "Greenhouse", which features every imaginable plant, flower and tree under the sun. When I plan a trip to places, I often use the world map to pan around looking for unusual features. Unlike when you are on the surface, the map lets you see the sea floor. While preparing a map, for this article, I kept noticing an un-natural looking sea floor, just west of the Galaxy. I finally decided to go explore the cause of the appearance. I placed a marker on it and teleported there. On arrival, I found myself under water, surrounded by ancient stone buildings. A glance up at the title bar told me I was in a place called, "My Atlantis". One of the buildings seamed to be a home, was unlocked and nobody on the whole sim, so I went in for a quick peek. Signs revealed that this was connected with "Bloodlines", so I was all the more rushed to get back out. Never the less, it was all a very attractive build and worthy of mention here.

I spent the better part of a week exploring the Blake Sea, in preparation for this article and will surely go back many more times. I could tell you more, but want you to have the joy of discovering it yourself. There are still many islands I have not visited yet and, like many, I find it's just fun going sailing and flying on the Blake Sea. I've provided a map, showing some key places, to help plan your visits. The map shows only the East end of the sea. It continues at least three miles to the West, but that will have to be another story. Have a bon voyage, keep a lookout for me and please don't point any cannons in my direction.

Sha
Posted by Bixyl Shuftan at 6:00 AM