This area of the Pangea sim is a theme park, with six attractions, dealing with, so called, areas of scientific interest. The attractions and approximate times are, Orbitron - 2 min., Space Mountain - 2 min., Journey to the Center of the Earth - 2 min., Time Keeper - 20-25 min., Voyage of the Nautilus - 10 min. and the Hyperion Cafe - 20-30 min. 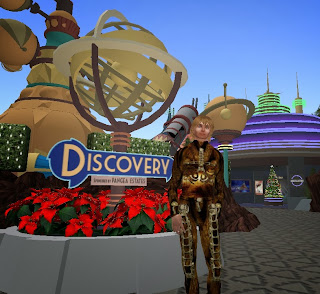 It is uncertain how we found this location. Going to the Destination Guide, for more information, turned up nothing, even when using the SLURL, used to TP there.

This area of the Pangea sim is a theme park, with six attractions, dealing with, so called, areas of scientific interest. The attractions and approximate times are,

This attraction, in the center of the theme park, is a merry-go-round, with multi-seat rockets, instead of horses. Sitting in it, a menu pops up, allowing ascending and descending options.
Space Mountain
Proceed to the boarding platform, click the blue box to rez a rail car and sit in it. It switches you to mouse-view and moves the car to firing position. Turns out, your car is the bullet, in a cannon, pointed at the moon.
Journey to the Center of the Earth
Here, we board a rail car that seats six passengers. It automatically puts you in mouse-view, to give a real life feel to the ride. For the next 2 minutes, the car makes it's way through the twists and turns of a long tunnel, but we did not see any other features, as one would expect to find. It was a bit of a disappointment, but on the bright side, at least it was free.
Time Keeper
This attraction begins with entering a waiting room, with paintings on the walls and signs, informing you to turn media on and push start. This made us apprehensive, given that our limited computer usually warns of media plugin failure at this point. We were pleasantly surprised when a video began to play on the screen. We are introduced to our guide, Nine Eyes, a time traveling robot, with panoramic head cameras, who seemed nervous about the reliability of the time machine. The shows play every half hour and you have to wait for the doors to open. Inside the theater, there are rows of rails, instead of seats. We are surrounded by video screens, providing Nine Eye's panoramic view. The video was well produced and entertaining. You can tell, it was made professionally. At the end of the show, the doors opened and we headed for the next attraction.
Voyage of the Nautilus
For this one, you go down the stairs into a Nautilus submarine simulation. Beyond Captain Nemo's pipe organ, stools line the walls, each with it's own large port hole, to view the show outside.
Hyperion Cafe 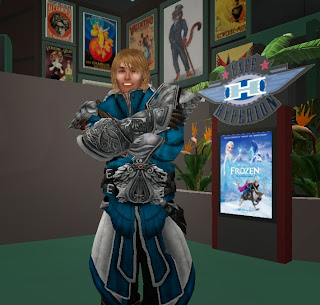 There are no signs in front of this attraction, announcing what it is. You won't see a ticket booth or even an entry door. above what looks like an alley, the front end of a steampunk zeppelin protrudes. Passing under, we are in what appears to be the lobby of a movie theater. To the left, there's a snack bar, big enough to serve a crowd, with coffee and snacks for sale. The signs say, we are in `Cafe Hyperion'. There are old movie posters on the walls and signs, reminding you to turn on and start media. Facing the main screen, there are rows of traditional seats and, in the balcony, there are cafe tables and chairs. The video was spectacular and confirmed the suspicion that this sim has a Disney connection. A Las Vegas style fountain serves as a projection screen for Christmas light show and songs, by characters from the new Disney movie, `Frozen'.
Returning home, with a Cheshire cat smile and both thumbs up, we report, Discovery is a `must see' and be sure to bring the mate and cubbies to this wonderful Christmas spectacular.
Pangea (242/147/22 )
Becky "Sha" Shamen
Posted by Bixyl Shuftan at 6:00 AM