We found this sim to be very captivating, for three main reasons. The first thing that got our attention was the incredibly detailed architecture. We made many return trips here, with the excuse that there was one more building to be seen, or more of the interior of one we had. Even as we write this article, there is need to pause and return for added detail and inspiration. 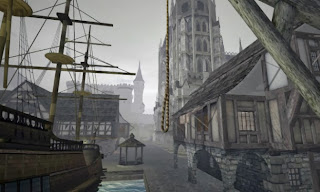 When Sha began SL, she would dance at Escort Oasis, most nights. There were up to 50 people in the club. She could listen to the music stream, had voice and could watch media, all without any lag. Why is it, with four more years of developing technology, are we now reduced to rubbing two sticks together, to get a fire?

The other reason for needing so many visits is another of the items that made this place so captivating. In four years of exploring Second life, this sim broke the record, for having the lowest frames per second of any sim we have been to. The rate varied, but on one visit our meter read .08FPS. Needless to say, I had to log off and try again later. On our last visit, the viewer went crazy and we could only escape by pulling the plug on the computer and doing a complete restart.

The third thing that made this exploration interesting has to do with history. This sim represents the late 16th century, London, England. The shops and homes are all two story, Tudor style buildings. Towering over them, like twin mountains, are the cathedral and castle. It is clear that, in this time period, a very few ruled over the population and controled their lives and resources. Over and over, we found ourselves thinking, this would not have been a time or place that we would want to live in. This inspired an internet search on the life and times of Queen Elizabeth, which proved to be as entertaining as the visits to the sim. 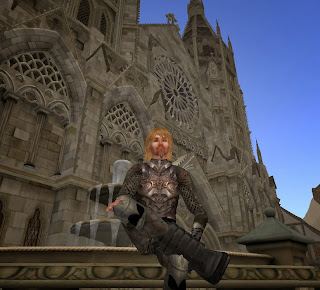 Contrary to popular belief, the idea of hell and what it is like was developed by early Christians and reached it's peak in the dark ages of Europe. Introducing these ideas created fears, which helped win converts and give leaders more authority over the ignorant masses. These ideas did not come from scripture. They reached their peak through poets, like Dante, with his book, "The Inferno". With fear pushed to the limit, mankind revolted and protestantism and the Renaissance were the result. When Elizabeth was queen, in the mid-renaissance, Europe was still a fearful place. Countries feared each other and Protestants and Cathilics treatment of contrary beliefs was anything but Christian. That a single woman could not only survive, but also rule her country and guide it on a relatively middle path is as miraculous as modern history gets.

A guru once told us that individuals that cause us the most grief are the source of our greatest growth. Will this laggy sim be as inspiring to you as it was to us? There's only one way to find out. Visit Tudor Rose, land of Elizabeth I.