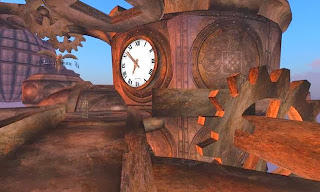 While he was still dressed for the part, we sent Josh to yet another Steampunk location. Starting 2000 meters up, in the middle of a tangled nexus, where map and compass are useless, you might think our explorer would require some time to get his bearings. Not so. Like some kind of Dr. Who, he made a bee line for the most unusual feature on the sim, breedable penguins. Really? Have we now seen everything?

Perhaps not. Turning about, shaking his head, with a big grin, Josh spots a shop with clothing and vehicles and heads for it. True to the period, the vendor display pictures are all in sepia tones. It will be a hard sell, for one accustomed to HD colored ads, but Josh needs a wardrobe and loves unusual vehicles, so scrolls through the entire catalog. The clothing didn't measure up to Blak Opal's, but they had some great vehicles, two of which were only $1 each, so guess who added to his garage. 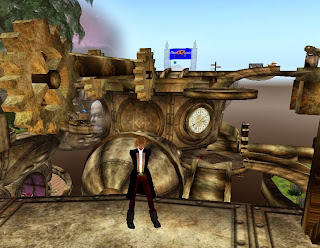 At the next area, a female robot, carrying a tray of drinks, offered refreshments and conversation. He had read that there were robots here, so this seemed quite natural. Shortly thereafter, he found a shop that sells that model and a host of others, either avatar or autonomous styles, including classics like R2D2, Buck Roger's "Twiki" (bidibidibidi) and the one from Space Family Robinson (danger Will Robinson...).

There were also some nice park areas and a multi-level freebie shop. All of this, so far, was in the sky, on interconnected floating platforms. Having seen a sign announcing land for rent, Josh jumped off to go have a look at ground level. 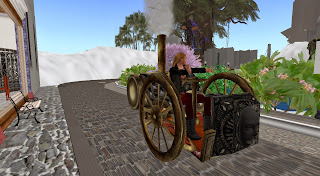 Back on terra firma, we find the land office, some homes and more breedable penquin areas. Having seen everything, Josh returns home to Sunweaver Bay to open and test drive his new rides. Since Josh and Sha do most of their exploring late at night, they seldom meet residents, so can't say much about the social scene. We can say; there was no lag and there were lots of new, unique, interesting things to see. It is an enjoyable, entertaining adventure. We give it thumbs up and recommend it to our readers.